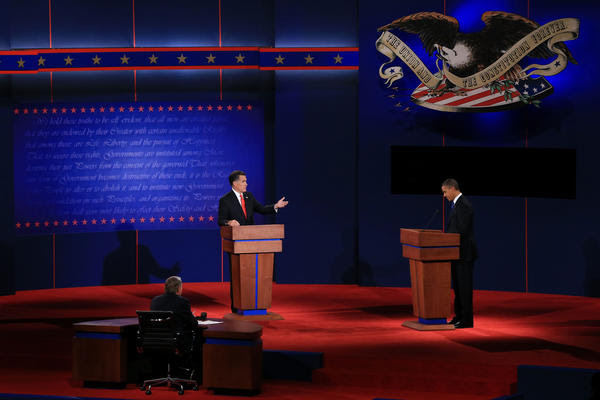 Mitt Romney and President Obama during their first presidential debate at the University of Denver. (Doug Pensinger / Getty Images / October 3, 2012)

October 3, 2012, 7:59 p.m.  ::  On education, President Obama correctly noted that his ideas for reform have been drawn from ideas championed by Democrats and Republicans, an overlap that also has drawn criticism in some quarters from allies of the president such as teacher unions.

Obama also said that his education reforms were “starting to show gains.” Such gains would be difficult to demonstrate. There are rising test scores in many states, but it’s difficult to link these to federal programs. The president has indeed favored aggressive reforms in education, but most of them are still in process as far as results.

Education historian Diane Ravitch, watching the debate, said in an email that the school-reform grants under Obama’s “Race to the Top” program have “thus far improved nothing.” (Ravitch is a disappointed Obama supporter who is strongly against Romney.) The Obama administration also has successfully pushed nearly all states to adopt year-by-year learning standards called the “common core.” The goal has been to raise academic standards and promote improved curricula nationwide, but little related to this effort has taken effect yet.

Mitt Romney spoke of education as part of his economic plan. The specifics he mentioned included simplifying the structure of the federal Department of Education. He complained that 47 training programs are housed in eight different agencies. For better or worse, job-training programs are, in fact, housed in multiple federal agencies.

He also spoke of sending education dollars “back to states,” which analysts from both parties have interpreted as a signal that he would reduce the budget and scope of the Department of Education.

Obama, in contrast, has sent education dollars from the federal government to the states via grants and direct aid, under the economic stimulus program, to save programs and jobs. Such programs have increased the federal deficit. The grants were frequently in exchange for adopting education reforms favored by the Obama administration.

Romney, in contrast, is suggesting that dollars would be returned to the states because they would not go to the federal government in the first place.

In criticizing Romney’s tax plan, the President emphasized repeatedly that his challenger’s plan would result in reduced funding for government programs, which, he said, would prove a burden for the middle class—either through more taxes or through cuts in services.

[For the Record, 7:58 p.m. PST  Oct. 3: This post has been updated below following the conclusion of the debate.]

As an illustrative metaphor, Obama cited overcrowded classrooms and old, out-of-date textbooks. It’s accurate that his economic-stimulus dollars for education saved teachers’ jobs — which had the result of maintaining smaller classrooms in many places. The number of education jobs preserved is 160,000, according to the National School Boards Assn. The Obama administration puts the number three times higher.

Overall, however, the federal government provides only a small portion of the funds for public education nationwide. And the stimulus dollars were one-time assistance that could only maintain teaching jobs for about two years as a bridge to better economic conditions. This strategy worked in some states, but many teaching jobs were lost in California after the stimulus funds ran out.

This comment on the debate came by email from Jeanne Allen of the Center for Education Reform in Washington, D.C. She has generally praised Romney’s approach to education as moving away from federal heavyhandedness (and some questionable policy directions) under Obama.

“So far I've heard they both want to improve skills—Romney wants to make schools better—his words—and Obama wants to invest, do more Race to the Top [grants], hire math and science [teachers]. Thousands of flowers blooming organically versus lots blooming in one growing field might be one way look at it,” she said.

The debate returned to education, just over an hour into the discussion, during the President’s response to a question about the proper role of government.

“We’ve got to reform schools that are not working,” Obama said. “We’ll give you money if you initiate reforms.”

Even critics would likely concede he was speaking accurately at this point, whether they support his policy priorities or not. This approach—providing incentives—was embodied in the administration’s Race to the Top grants and other programs. The President added:  “Race to the Top was not a top-down approach.”

Here, some observers from both parties would disagree, arguing that the Obama administration expanded the federal role in a way that some find objectionable.

The president also talked of plans to hire more teachers and stated that his Republican challenger “doesn’t think we need more teachers. I do.”

That characterization does not represent Romney’s position, although it’s true that Romney has criticized the federal economic-stimulus program, which provided money to preserve teaching jobs for about two years during the recession. As far as hiring or retaining teachers, Romney has said that the funding of teachers should be a state and local decision.