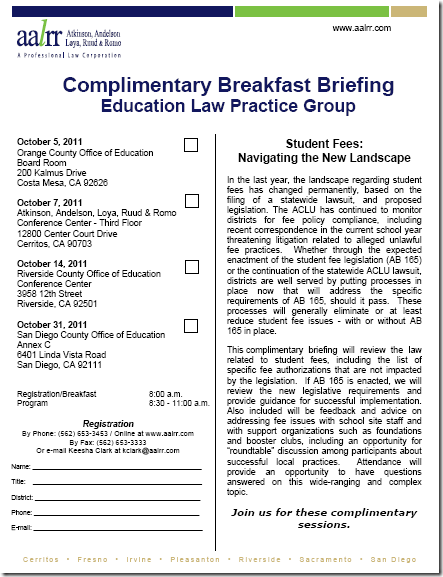 PART OF THE LEGISLATIVE COUNSEL'S DIGEST

(1)Existing law requires the Legislature to provide for a system of common schools by which a free school is required to be kept up and supported in each district. Existing law prohibits a pupil enrolled in school from being required to pay a fee, deposit, or other charge not specifically authorized by law.

This bill would prohibit a pupil enrolled in a public school from being required to pay a pupil fee, as defined, for participation in an educational activity, as defined, as specified. The bill would provide that this prohibition is not to be interpreted to prohibit solicitation of voluntary donations, voluntary participation in fundraising activities, or school districts, schools, and other entities from providing pupils prizes or other recognition for voluntarily participating in fundraising activities. The bill would specify that these provisions apply to all public schools, including, but not limited to, charter schools and alternative schools, are declarative of existing law, and should not be interpreted to prohibit the imposition of a fee, deposit, or other charge otherwise allowed by law.

smf: As of this posting (1pm 3 October) the bill has been passed by both houses and is enrolled – which means it's on the governors desk for his signature or veto.

Tuesday, September 20, 2011 at 10:58 a.m.  - California public schools are not allowed to charge students for educational activities or supplies. That’s been the rule since the state Constitution was ratified more than a century ago, and it was reaffirmed in 1984 by the State Supreme Court.

But if a student’s family is told they have to pay for a textbook or football uniform, their only recourse is an expensive legal battle.

Last year, the American Civil Liberties Union on behalf of students and parents filed a class-action lawsuit [PDF] against the state contending that schools were illegally charging fees for educational materials at a disturbing rate. Then-Gov. Arnold Schwarzenegger agreed with the suit and pledged to pass a law that would create an enforcement mechanism addressing the issue. It never happened.

Now, AB 165 – by Assemblyman Ricardo Lara, D-South Gate – is sitting on Gov. Jerry Brown’s desk. And the ACLU has said it will drop the lawsuit if the bill is signed into law. Under the legislation, superintendents, at the beginning of the school year, would be responsible for conducting assessments of the legality of collected fees. Financial and compliance auditors would include a review of those findings in their annual report. If a fee were found to be illegal, the issue would be taken up at a local school board public meeting.

Parents and students also would be able to file complaints about specific fees using the Williams Uniform Complaint Procedure – a process for anonymously petitioning districts to address school conditions. Districts would be responsible for reimbursement of all improperly collected money.

But how do administrators know which fees are acceptable?

Not all fees are considered illegal, said Brooks Allen, director of education advocacy for the ACLU of Southern California. The California Department of Education created several statutes that provide exemptions to the rule. While someone could argue technically that these statutes conflict with California’s broad constitutional language, Allen said there’s a general understanding about what’s appropriate.

“The issue of unconstitutional school fees is something that crops up from time to time,” he said. “But we saw a real surge in the calls we were receiving from parents and students for these fees being charged for core academic instruction materials.”

Because of the ambiguity around school fees, the San Diego Unified School District hired a lawyer to draw up guidelines for administrators after the district was included in the ACLU lawsuit. Brooks said the district came up with a fairly good set of rules.

Jack Brandais, spokesman for San Diego Unified, said some principals simply were not aware they were breaking the law, adding that students always were provided materials if they could not afford them.

“And you had other principals in areas where the PTA or the school foundation wanted to provide all this stuff, and parents feel like they don’t have a problem with doing this,” he said. “So in those areas where everyone thinks it’s OK, over the years, it’s just kind of evolved.”

Many schools were aware they crossed the line. According to the 2011 annual report [PDF] from UCLA's Institute for Democracy, Education, and Access, nearly 20 percent of principals questioned admitted to collecting illegal fees to help pay for instructional materials as a consequence of budget cuts.

“We had students who went weeks without a required textbook and workbooks because they couldn’t afford them,” Brooks said. “In some instances, they had their names put up on the board and singled out in a humiliating manner.”

The ACLU reported that at some schools, students were required to buy hundred-dollar calculators; students were charged $80 to take an Advanced Placement test and $150 for AP biology lab fees. Art fees at one school ranged from $30 to $125 a semester; at another school, parents were asked to pay more than $700 for cheerleading uniforms.