From the same wonderful folks who brought us API+AYP: AGT! - LAUSD UNVEILING ITS SCHOOL-BY-SCHOOL REPORTS + smf’s 2¢

…or:  It isn’t how the students do on the tests, it’s how we drive the data that counts!

10/13/2011 01:00:00 AM PDT - Using a controversial method to analyze students' academic scores, Los Angeles Unified released a school-by-school report Wednesday that for the first time offers parents an in-depth look at how well teachers are educating their students.

Posted at http://agt.lausd.net, the report gives parents access to information dubbed Academic Growth over Time, which compares test scores for 2010-11 with those from the previous year. The data includes a breakdown of various subjects as well as a comparison by gender, race, and for English-language learners. 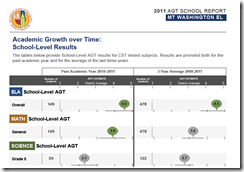 The AGT also predicts the academic progress that students should make from year to year, based on their academic track record and that of similar students.

"It gives us a more complete picture on how schools are doing and how teachers are doing," said Noah Bookman, the district's program and policy development adviser.

"As a district, we're using that information to form conversations about school improvement. We think it's an opportunity for the school to ask questions as to what's working and what's not working."

Traditionally, a school's performance was based on its Academic Performance Index score, which is extrapolated from achievement tests taken by students.

While the API provides a snapshot of a student's knowledge of material on the test, Bookman said it offers little insight into the whole learning process.

"Our objective is to give parents complete and robust information for their schools," Bookman said. "What we encourage parents to do is understand this information and what this means so they can understand it and form conversations about it."

In about two weeks, the district said, it will release another analysis called "Two by Two Metrics," which will compare the performance of schools with similar demographics.

And in November, results reflecting the contributions by individual educators will be released, but only to teachers and district administrators.

The AGT system was introduced in April by district Superintendent John Deasy, who supports the controversial "value- added" method of evaluating student test scores. The method is designed to help measure the impact a teacher has on a particular classroom.

"It is my strong belief that we, as a team, will perform at our best when we understand and work toward a common set of specific and measurable targets," Deasy said in a statement.

"Academic Growth over Time is an additional piece of data that should be used to develop our own performance targets as individuals and as members of working teams in our schools."

With the release of the AGT data comes the challenge of explaining to parents how to understand it, said Maria Casillas, chief of school, family and parent/community services for the LAUSD.

"Public education is complex," Casillas said. "The challenge is this - making the AGT concept comprehensible to parents and helping them navigate the system of data that they will need to hang onto during the time their child will be in public education."

The district's next goal is to reach out into the community with this information, Casillas said.

"We're going to cultivate a new relationship with parents around data," Casillas said. "We have to make it palatable for parents."