FOR THE SAKE OF THE CHILDREN: You, me — any parent — would risk it all to cross the border to secure a better future for our families.

Op-Ed By Susan Straight in the LA Times | http://lat.ms/vtEHvE 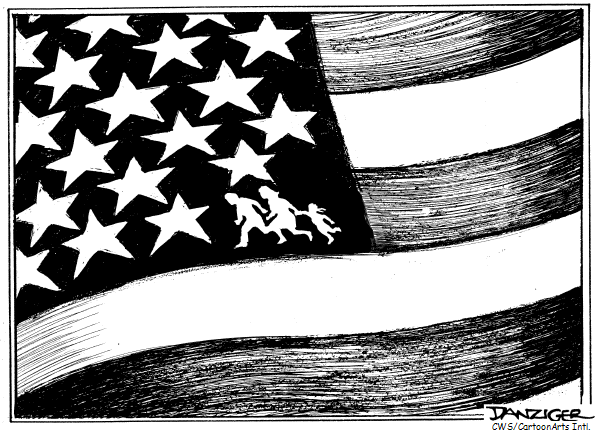 30 Oct 2011 - In 1979, in my hometown of Riverside, my father came home one evening with news from the linen plant where he worked. A group of women whose job it was to wash, dry, iron and stack hospital linen had been taken away by immigration officials that day. They were undocumented workers from Mexico and would be deported.

I was 18 when I heard this, and I couldn't stop thinking about the likelihood that the deported women had left children behind. What if one had been forced to leave her children with a neighbor she didn't like or trust, just for that morning, because she had no one else? What if a 10-year-old had been left to watch younger siblings, and then the house grew dark, and still no one came home? What would happen to those children now?

That summer, I wrote 50 pages in a notebook imagining the life of a young Mexican woman who was taken in an immigration raid, leaving her California-born daughter to be raised by a foster mother. It was a scenario I knew, since my own mother had raised foster children for years, and I knew how, for many of them, "mother" was just a distant idea.

But I didn't really understand — nor could I finish the novel — until I had daughters of my own, and nearly lost one of them. Only then did I begin to understand the full complexity of the story and why mothers, and fathers, would take such huge risks for the possibility of helping their families.

In 1997, I journeyed to Oaxaca so that I could see the landscape and talk to people about making the decision to risk it all and travel illegally to a new country. My daughters, 7 and 5, were surrounded by Mexican women who cooed over their hair and eyes, and offered them sweets and tortillas. But the younger one soon became very ill with a bacterial infection she had apparently picked up before leaving California. A kind Oaxacan woman helped us find a doctor, and my husband carried our delirious, nearly unconscious child for blocks and blocks to the doctor's home. We then had to trust that the injection he gave her was the antibiotic she needed, and that he knew how to make her better.

I was horrified. This was my fault. I had wanted to write about a mother who would do anything to find the child she left behind in the United States, and I had ended up putting my own daughter at risk in the country my character would flee.

When the fever finally broke, I walked to the nearest church where a dozen women with shawls over their heads were praying in front of La Virgen de Soledad, patron saint of Oaxaca. I told them in Spanish what had happened, and they showed me how to offer my own life for that of my child, assuring me that God would hear my prayer. That's what they were doing, on their knees, in the dark, with photos of their children and offerings of candles and coins and flowers.

I joined them. And when I returned, her father said that he had offered the same prayer, but alone in the hotel room with no candles, only her breathing.

This is what I learned in Mexico: that parents will make any sacrifice for their children. Why do so many come across the border illegally? If you told me that one of my daughters would die young after stepping on a nail in a village without a doctor, or that my girls would have to leave school because they were needed to work and support the family, or that they would be in danger every day from drug cartels, I can promise you I would risk everything to give them a better life, especially if that life was available just across the border.

This fall, we are watching a different kind of migration, as undocumented immigrants flee Alabama in the wake of a draconian new law that involves schools, employers, landlords and police in a comprehensive immigration crackdown.

It's no wonder immigrant families are fleeing Alabama. But are they returning to their countries of origin? That's not likely — not as long as they can do better for their children in another state.

Alabama farmers and other employers are having difficulty filling jobs, and when they do, the new workers aren't as willing to work long hours doing difficult labor.

Moises Beneros rides on the shoulders of another marcher as they walk down Elkton Road in Athens, Ala., during a protest against Alabama's immigration law Oct. 16. (The Decatur Daily, Gary Cosby Jr. / AP Photo) October 30, 2011

Living only 100 miles from the Mexican border, I've seen wave after wave of immigration and a variety of laws intended to control it. I saw lives changed by Reagan's amnesty in the 1980s and by Clinton's Operation Gatekeeper in the 1990s. And through all the policy shifts, the migration has continued. We can't simply open the borders, of course. But we need to acknowledge the labor issues, and family realities, that have produced the situation and develop policy that acknowledges those complexities.

A teacher friend told me recently about her second-grade student whose father was killed in drug violence. An uncle helped the boy and his mother get to California, but then the uncle was killed. The boy has nightmares and never says a word in class, and his mother is desperate. But will she return to Mexico? Would you?

Susan Straight's novel "Highwire Moon" explores the lives of a mother and daughter separated by the mother's deportation. Her most recent book is "Take One Candle Light a Room."