SECRETARY OF EDUCATION DUNCAN WALKS OUT ON 1,000+ PARENTS WHO TRAVELED TO HIS L.A. COUNTY TOWN HALL …in favor of donors at $2,500. per-person fundraiser?

Arne Duncan has places to be.>>

Thu., Oct. 13 2011 at 9:35 AM - Lydia Grant, a big education activist in SoCal, asked us to attend U.S. Secretary of Education Arne Duncan's two-hour-long town hall in Pico Rivera earlier this week. Duncan had promised big things for the Tuesday event:

The town hall is hosted by the U.S. Department of Education and will include space for the public to ask questions and share their thoughts. The event is designed to engage community leaders from across the Los Angeles region in meeting President Barack Obama's challenge to lead the world in college completion by 2020.

Grant also invited about 200 parents -- and says over 1,000 showed up in total, some traveling all the way up from San Diego. But that didn't stop Duncan from walking out after 20 minutes.

"Everybody was just shocked," says Grant, because the town hall had been "pushed as if parents were going to be able to really tell their stories and get help."

And even for the short time Duncan was speaking and answering a couple questions in the brick El Rancho High School basketball court, according to Grant, the audience could barely hear what he was saying. The only words that really came through were "Jobs Act."

Oh, brother. A straightforward news piece from the Whittier Daily News reads like a campaign flyer:

Duncan said the passage of the Jobs Act "needs to happen" because the current economic situation has depleted school district budgets.

"It will keep teachers in the classroom, strengthen our schools and improve the local economy in communities across the country," he said.

If Obama's going to plant someone in east L.A. County -- because he's too scared to show his face outside a Hancock Park gala -- he could at least choose someone who's got the patience to pretend to listen to desperate parents for more than 20 minutes.

According to the Whittier newspaper, Duncan also took some time to praise California Governor Jerry Brown for his passage of the DREAM Act, in case everyone and their mother hadn't gotten word already, and let a couple congresswomen traveling with him talk about what a great job Duncan has been doing.

"It was awful," says Grant. "One-third of the audience got up and left."

Good for them. We would have done the same. 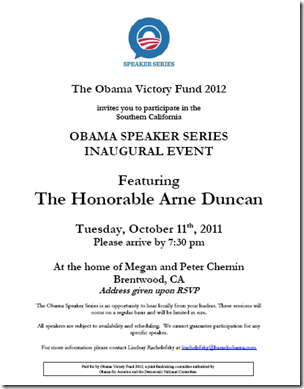 Note that sponsor was Megan Chernin - who is also fundraiser in chief for L.A.’s Promise (the “Network Provider” formerly known as “Mentor LA” and then “MLA Partner Schools” – that is in trouble for its inadequate management of of Manual Arts High School) and also CEO of Supt Deasy’s Fund for LA Schools – the private foundation to support/save/reform LAUSD.