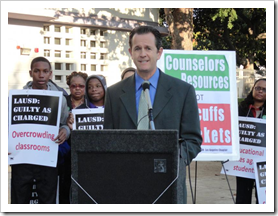 "Order in the court!" David Lyell, the secretary of the United Teachers Los Angeles, shouted as he acted as the prosecutor and hammered a fake judge's mallet on the podium top, kicking off the "trial" outside Manual Arts High School in South LA.

"This is a civil rights issue," he said. "We need real reform, not the kind espoused by millionaires who think they know how to fix public education because they have a copy of 'Stand and Deliver' on DVD."

More than 140 schools reported overcrowding classrooms in the district, according to the union's recent survey. Venice High School has up to 50-plus in some math classes and up to 75-plus in P.E. classes.

Class size for elementary schools should be in the lower 20s and in middle schools and high schools no more than 30-1, said Warren Fletcher, president of UTLA.

"The class size is large anyway. However, right now because the school district is continuing to keep 1,200 educators laid off and away from their classes, the class sizes are even larger than other years," he said.

“It is absolutely crucial that all parties come together to assess and make adjustments to ensure the best outcome and environment for our students,” said Superintendent John E. Deasy in the statement.

L.A. Unified acknowledged a $55 million year-end surplus from 2010-11. UTLA demanded the District use the budget windfall to bring back as many as 662 teachers and professionals to classrooms.

Andrea Leyva, a senior at Manual Arts High School, found it difficult to maintain good grades as she doesn’t have access to the library or a computer lab where she can study or print paper.

She said she and her classmates have to race to class for one of the coveted chairs because there are not enough. Some students sit on counter tops, folding chairs, and on the floor.

“My art class has 50 students and no art supplies. I was issued a 10th grade book due to the deficiency while I was taking a 12th grade AP English class,” she said.

Delona Washington, a senior from the same school, is in a class of 45 students. “We want to learn stuff, but people are talking loudly. You can’t hear anything,” she said. She said she preferred a class of 25 or less.

“When you fire teachers, you increase class size,” said Travis Miller, an English teacher at Manual Arts High. “This is not an issue of teacher comfort. Class size is a professional requirement.”

He said increased class size not only makes their job difficult, but dangerous.

Jeremy Davidson, an art teacher at Manual Arts High, told L.A. Times he walked off his job after a group of unruly ninth-graders hijacked his sixth-period drawing class.

Cheryl Kono, a parent and former LAUSD Pupil Services & Attendance Counselor, urged L. A. School District to rehire staff, decrease the over-crowdedness, and have a sense of hope. “The students want to be in school. They want to learn. Parents do care,” she said. 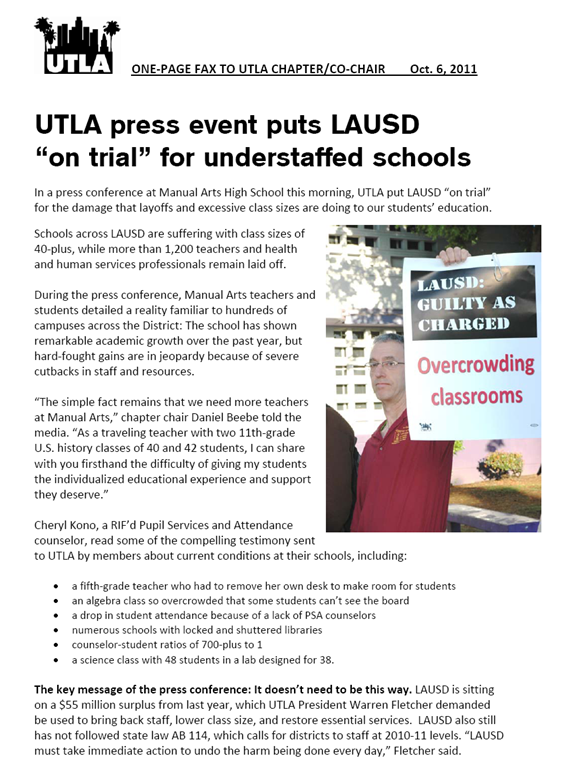