That’s what the famous school’s alumni association thinks, and the group is spear-heading an effort to have the campus named to the National Register of Historic Places.﻿﻿

﻿﻿ The City Cultural Heritage Commission will consider a resolution supporting the efforts at its meeting today. The State Historical Resources Commission will take up the issue at its next quarterly meeting at the end of the month. 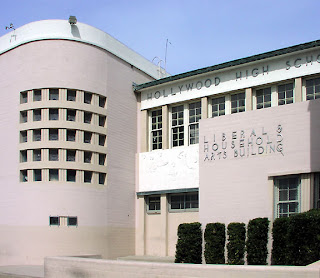 ﻿ The Hollywood High School Alumni Association started the application about a year ago when rumors were spreading that the public school might be sold (HHSAA discussion group). The Los Angeles Unified School District, which owns and operates the school, is mired in a years-long fiscal crisis and there was speculation that LAUSD could sell the property for a huge sum since its 14 acres are in the middle of one of LA’s hottest development zones.

LAUSD hasn’t sold the campus but the alumni association’s application has continued to move forward.

“The Hollywood High School Historic District seeks to preserve the legacy, legend and future integrity of our fine school that has been giving recognition for its outstanding architectural work for more than 70 years,” Christopher Spencer, Public Relations Officer for the Hollywood High School Alumni Association, told LandUseLA.com.

“Being listed in the National Register of Historical Places is important. Making sure our school stands firmly for the future is one of our missions. The Hollywood High School Alumni Association has allocated resources to support this cause under our charter to maintain the spirit and alumni community of Hollywood High School now and forever.”

According to the state Office of Historic Preservation, Hollywood High was established on its current site at 1521 N. Highland Ave. in 1904. The original Main Building was completed in 1905, and the first major campus expansion campaign concluded in 1913.

The 1933 Long Beach Earthquake led to the demolition and replacement of every building except the library and auditorium. The replacement structures were all designed in the Public Works Administration Moderne style with significant funding from New Deal-era relief programs, lending the campus a “unique visual continuity.”

But the City can support the application for national recognition, which is what the Planning Department is recommending.

“Hollywood High School is a prominent, cohesive, and intact collection of PWA Moderne educational buildings,” according to the Office of Historic Resources staff report. “It has … significant associations with the entertainment industry and the development of Hollywood.”

The list of Hollywood High alumni who became famous entertainers is long and impressive, including but not limited to Judy Garland, Sarah Jessica Parker, Laurence Fishburne and John Ritter.

The commission meets at 10 a.m. today in City Hall. Presuming the commission supports the resolution, it will be forwarded to the City Council and Mayor’s Office for their concurrence.