Cindi Santana (1995-2011): WHAT IS LAUSD’S RESPONSIBILITY WHEN IT COMES TO TEEN VIOLENCE? + HUNDREDS MOURN CINDI SANTANA

What is LAUSD’s responsibility when it comes to teen violence?

4LAKids will post online version when it becomes available 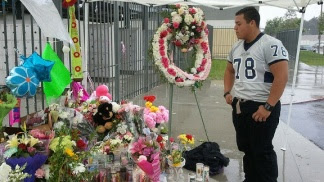 - Jackie Satti | A memorial at South Gate High School for Cindi Santana, 17, who was fatally stabbed by her boyfriend Abraham Lopez, 18. Pictured is Jorge Garcia, 16, who intervened during the stabbing.

The murder of Cindi Santana, 17, at the hands of her ex-boyfriend, Abraham Lopez, 18, on campus during a lunch break at South East High School sent shock waves through the community and the Los Angeles Unified School District.

It raised some serious questions about how much responsibility schools have in terms of confronting violence on campus. According to the Los Angeles Times, “one in three adolescent girls in the U.S. has been physically, emotionally or verbally abused by a dating partner, and one in 10 high school students has been hit, slapped or physically hurt by a boyfriend or girlfriend.”

In an effort to focus more attention on the problem of violence and teen dating, the Los Angeles Board of Education approved a proposal on Tuesday that would allow schools to train one staff member to help students who may be in abusive relations. If more funding becomes available, some schools may get a visit from Peace Over Violence, a nonprofit group focused on reducing violence in schools. The group, which currently has programs operating in schools in the district, will help youth better understand what an abusive relationship is and how to get out of one.

Should LAUSD fund an anti-dating violence program in the midst of massive budget cuts? Do school officials have a responsibility to identify and stop violence from occurring on campus?

The 17-year-old, whose ex-boyfriend is in custody in her death, is recalled as a radiant young woman with a promising future.

October 12, 2011 - Hundreds came to the South Gate city auditorium Tuesday to mourn Cindi Santana, a 17-year-old South East High School student whose life was hailed as a miracle and death decried as a tragedy.

Santana, a senior, was allegedly stabbed by her ex-boyfriend Sept. 30 during a lunchtime attack on campus. Another student and a dean were injured when they tried to restrain Abraham Lopez, 18. He remains in custody.

The crowd lined the sides of the hall, crying and wiping away tears. A priest offered prayers as he stood before Santana's white casket topped with pink and white roses.

Her face — fair-skinned, with dark tresses and big, dark eyes — was projected on a screen at the front of the dim auditorium. Her picture was on the T-shirts many mourners wore and on the cards they held as they filed in.

Family and friends remembered a young woman who was beautiful and intelligent — and whose life began with major challenges.

Her aunt, Rosy Santana, recalled that Cindi was born with a severe heart condition, requiring major surgeries starting within her first few months.

She was "so fragile, small, sweet," Rosy Santana said.

"When her lips turned purple, we knew she lacked oxygen. When she turned pale, we knew she had played too hard," she said. "When she smiled, she would light up anyplace."

Hours earlier Tuesday, the Los Angeles Board of Education unanimously approved a resolution to expand programs designed to prevent teen dating violence. The programs could cost $2 million a year, and the board has yet to designate the money for it.

Board member Steve Zimmer, who called for the board action, said the programs could potentially avert another tragedy like Cindi Santana's and make schools a safe place for students to receive support, particularly regarding abusive relationships.

In South Gate, friends and family grieved for a girl whose life was cut too short. Her mother, Margarita Meza, was frail and sobbing, leaning on Cindi's older sister, Janet, for support. She thanked those who had helped her family and who showed up Tuesday night. She spoke in Spanish of having a corazón partido — a broken heart.

Rosy Santana said Cindi was "a young woman with a promising future, only to have her dreams shattered."

She recalled Cindi's quinceañera. At 15, she was radiant. "The miracle baby was turning into a beautiful woman," she said. "Farewell, my beautiful butterfly."