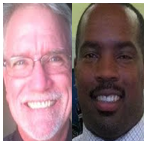 08.29.2011  - MY TURN - In a rare and odd coincidence, two principals, who both started in 2005 at Dodson and Dana local middle schools that serve San Pedro as well as parts of the Harbor Area, vacated their posts in July for promotions in Los Angeles Unified.

Their new posts are eerily similar.

Michael Romero, who heads Los Angeles Schools District 8, said he promptly promoted Dana Middle School’s Terry Ball, 52,  and Dodson Middle School’s Travis Collier, 40,  for a variety of reasons, including their strong increases in their school’s test scores and their strengths in working closely with students and their communities.

They will both supervise  a mixture of high and middle schools.

“It’s just a coincidence,” said Romero, who heads all Los Angeles Unified Schools in San Pedro, Harbor City, Harbor Gateway, Lomita, Wilmington, Carson, Gardena and stretching north to include much of South Los Angeles.  “We were looking for strong instructional leadership. They’ve ensured safe and civil campuses. There was strong growth all over District 8. Beyond being strong instructional leaders, there were many other dimensions in leadership that I took into account before making the final decision.”

“They did great work reaching out to families and kids. They offered clean, safe and nurturing environments. I’m most pleased that we were able to hire instructional leaders that embrace their role as instructional leaders who have great interpretive skills, a wonderful work ethic and passion in ensuring quality education.”

They competed with about  eight other applicants for the newly devised jobs; both administrators salaries went from roughly around $113,000 a year to $116,000, they said.

In a great shift from earlier LAUSD philosophy, Romero has broken from the traditional supervisory roles where one district administrator oversees  instruction solely of high schools and another is in charge of middle schools.

These are the "secondary directors" posts that Collier and Ball will be filling. Now retired Shannon Lee supervised the high schools in District 8 and Walter Flores managed the middle schools. Flores too was promoted.

Instead, Romero opted to encourage a study and promotion of  “a family of schools” where each former principal will tend to a blend of high schools and their middle school feeders to incorporate more collaboration efforts and a better  understanding between the upper level and middle schools.

Currently, many high and middle schools fail to collaborate in any fashion.

In the new structure, Ball will direct San Pedro and Narbonne High Schools, along with their continuation high schools, Angel’s Gate and Patton High. In the restructure twist, Ball will also watch over three middle schools, Dana, Fleming and Dodson.

Collier will administer to Gardena and South Los Angele’s Washington Preparatory high schools along with two continuation high schools, Moneta on the Gardena campus and Duke Ellington on the Washington campus.

In the meantime, Romero said, a group of teacher, parents and administrators are busily interviewing and narrowing down the field of potential candidates for Dodson and Dana.

Each committee for the two schools sorted through 20 applicants and will submit three names for each campus – in no order -- so Romero will make the final decision. He plans to announce his selection next week.

“I make the final choice so this weekend I will be reflecting and making the final decision,” Romero explained.

Calling the departure from Dana “bitter-sweet,” Ball said he believed his greatest achievements at the school were welcoming and encouraging parent participation, increasing the state’s standardized tests scores from 654 to 716 and most importantly – changing its pitiable reputation that haunted it for years. Dana was always considered a poor-achieving school compared to its Dodson counterpart. Many residents outside of Dodson’s residential area clamored to get in the school.

“We really improved Dana’s reputation and we increased parent involvement,” Ball said. “This year, we received parents (and their children) that we usually wouldn’t get. I think Dana’s test scores are ready to explode. It was a hard decision to leave. I feel like it’s my baby.”

In his new frontier, Ball said he was “excited” and ready to embrace the new model Romero created. For the most part, all Dana shared in the past with San Pedro High was a fence. The schools are side-by-side. Now, Ball said he will be able to help the campuses collaborate and enhance the needs of children starting out at  middle all the way through high school.

Collier said he was delighted to receive the job, but a bit nervous at the same time. When he first applied, another person received the position, but was quickly upgraded to higher post.

As soon as he settled on returning to Dodson – a school he’s proud of for several achievements – he received the call that he was selected.

“It was very bitter-sweet,” said Collier, who lives in Lomita. “I love the kids at Dodson and the community was supportive. We had done some really positive things and it was close to home. It was difficult to leave.

“But I wanted to look at the district from a different perspective.”

His biggest accomplishment at Dodson, he explained, was when he and his staff were able to achieve the 800 level in standardized test scores in 2009 and by 2010 the school leaped to 825. When he started, the school received a 738 in test scores.

“I would say my staff and I made it a really student centered campus and we really pulled it together,” he said.

One of his biggest goals, Collier said, is to reduce the 9th grade dropout rate. He’s looking forward to changing that.

“If a kid has not been successful for awhile and they can’t face that anymore then they drop out,” Collier said. “We have to change that.”

Romero also named Veronica Aragon, last the principal overseeing the construction and opening of  Rancho Dominguez Preparatory School in Long Beach and a formal middle school principal, as a third director to manage the oversight of  middle and upper grade campus.

“We wanted to be bold and innovative,” Romero said, “and push ourselves outside the box.”

(Diana Chapman is a CityWatch contributor and has been a writer/journalist for nearly thirty years. She has written for magazines, newspapers and the best-seller series, Chicken Soup for the Soul. You can reach her at: hartchap@cox.net or her website: theunderdogforkids.blogspot.com) –cw