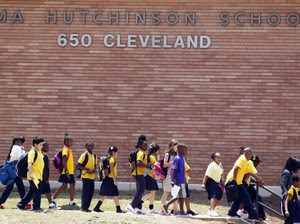 << John Bazemore/AP - Students leave Atlanta's Emma Hutchinson School in July. Hutchinson is a year-round school that has been identified as one of 44 schools involved in a test cheating scandal.

August 28, 2011 - Cheating scandals have rocked a number of school districts across the country this year. The publicity is pushing states to look for better ways to detect and prevent tampering with the test results, and some say constant vigilance is required to guard against cheating.

What happened in Atlanta is hard to imagine: Dozens of administrators and teachers apparently conspired to change answers on standardized tests. When those tests showed big gains, school leaders took the credit. But they were caught, in part, because Georgia investigators have been looking for signs of tampering for years.

Kathleen Mathers, who runs Georgia's Office of Student Achievement, says her state is in its third year of using erasure analysis of all elementary and middle school tests. Mathers says that concerns about testing led the state to ask test designer McGraw Hill to look extra closely at those No. 2 pencil marks.

Mathers says that analysis cost the state about $27,000 — a small fraction of its testing budget. The data established that in many schools there were just too many switches from wrong to right.

That information alone is just the start, says testing forensics expert John Fremer. "The best thing to do is looking for unusual agreement among test takers."

Fremer runs Caveon Test Security, which has helped Atlanta and Washington, D.C., investigate suspicious incidents. He says if every student is getting the same answer right or the same answer wrong, then something might be going on.

No Child Left Behind required testing to be rolled out at each of the grades between grades three and eight. But with this it meant that we had to distribute the resources for testing across more grades.

Investigators also look for unusual spikes in test scores, he says. Sometimes there's a good explanation for that improvement. Fremer says cheating is hard to detect because despite recent scandals, it is still very rare.

"Only 1 or 2 percent, maybe, of educators don't follow the rules," he says.

Pennsylvania is currently looking into patterns of unusual erasures or jumps in achievement.

But not every state follows up on that initial erasure analysis as vigorously as Georgia did. That probe involved involved dozens of investigators across state government.

The Consequences Of Not Passing

Professor Gary Miron of Western Michigan University says this problem is part of the troubled legacy of No Child Left Behind. The law said test scores would determine the fate of entire schools.

Schools that fail can be shut down, and bad test scores can also jeopardize funding. And now a growing number of states are planning to evaluate teachers based in part on test scores.

"No Child Left Behind required testing to be rolled out at each of the grades between grades three and eight," he says. "But with this it meant that we had to distribute the resources for testing across more grades."

Miron says that leaves less money to check for tampering.

But others in the field say scrutiny of test results costs only a fraction of testing budgets and should be considered part of the cost of doing business.

Fremer of Caveon Test Security has built a business on this assumption.

"You're not going to be able to run a state testing program without doing comprehensive analyses of the results," he says. "I mean that ship has already sailed."

Most states have joined in an effort to establish a common national curriculum and, eventually, a common set of tests.

They hope to administer most tests by computer, which could make it tougher to tamper with results or force investigators to develop a new set of tools to find and stop cheating on standardized tests.

Back to school – and pushed to cheat?

www.huffingtonpost.com/.../beyond-public-schools-che_n_927394... – Cached Aug 15, 2011 – When the Navy discovered an exam-cheating ring aboard one of its submarines, it swiftly fired the commanding officer and kicked off 10 ...

www.charlotteobserver.com/.../testing-cheating-learning-and.html – Aug 5, 2011 – Remember when teachers put the fear of God into you about cheating? You'd be huddled over your desk with arms bowed out in a circle ...