CLAIMS THAT NYC TEACHERS AND ADMINISTRATORS CHEATING ON STANDARDIZED TESTS TRIPLE + UNDER BLOOMBERG, A SHARP RISE IN ACCUSATIONS OF CHEATING BY EDUCATORS

●●That oughta fix it:   “State officials have acknowledged they do little to monitor for cheating and have set up a ‘high-level working group’ to consider the problem.”

Martin Shields/Getty - As the Bloomberg Administration increases the stakes on standardized tests, reports that teachers and administrators are cheating on exams has tripled, according to city data.

As the Bloomberg administration has raised the stakes on standardized tests, the reports of test tampering and grade changing have increased to 225 last year from just 68 in 2003.

"There was a for a while a system of rewards with the bonuses -- and what could be considered punishment, judging the teacher (by the scores)," said Commissioner Richard Condon, noting the increase in the number of schools and the budget also helped account for the spike.

Condon's office took only 6 of last year's cheating cases, finding wrongdoing in two cases; the rest were referred to the city Department of Education for investigation. Agency officials did not provide an accounting of what happened with their probes.

"Since Mayor Bloomberg took over the city's public schools, we have actively encouraged staff to report allegations of misconduct," said Schools Chancellor Dennis Walcott. "However, as the independent Commissioner has investigated more and more cases, he has not found an increase in actual cheating."

As The News reported earlier this month, the city dropped some simple monitoring for cheating on the state's elementary and middle-school exams. The city stopped using a relatively simple analysis of suspicious patterns of erasure marks in 2002, unless there are allegations of misdeeds.

City officials insist the change happened before the mayor won control over the schools in the summer of 2002, but accounts differ, the New York Times reported Monday.

"The big problem is not whether erasure analysis occurred a month earlier or a month later," said Harold Levy, who as schools chancellor from 2000 to 2002 beefed up monitoring for cheating.

"It's really whether there has been improvement given the results we just saw after the recalibration of the exams. That's much more disturbing," said Levy, referring to the huge drop in the test scores in 2010 after the state revamped the exams, followed by only slight improvements this year.

State officials have acknowledged they do little to monitor for cheating and have set up a "high-level working group" to consider the problem.

NY Times: Under Bloomberg, a Sharp Rise in Accusations of Cheating by Educators 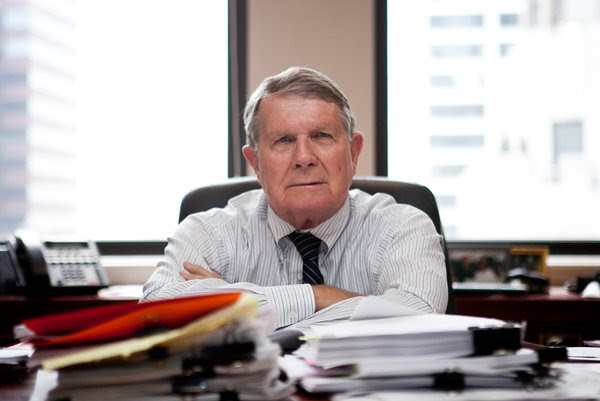 Raymond McCrea Jones/The New York Times- Richard J. Condon, special commissioner of investigation, attributed the rise to the expansion of the school system and to the higher stakes attached to standardized tests and classroom grades.

August 22, 2011 - Annual allegations of test-tampering and grade-changing by educators have more than tripled since Mayor Michael R. Bloomberg took control of New York City’s school system, outpacing a broader increase in complaints of adult misconduct in schools during the same period, according to the special commissioner of investigation.

The commissioner, Richard J. Condon, attributed the rise both to the expansion of the school system — its budget has more than doubled, to $24 billion from $11.5 billion when he took office in 2002, and the number of schools has grown to 1,700 from 1,200 — and to the higher stakes attached to standardized tests and classroom grades. The city’s performance bonuses, teacher evaluations, school progress reports and decisions on closings are all increasingly tied to student performance.

“When you start giving money to the schools to do well, that’s another incentive to appear to do well if you are not doing well,” said Mr. Condon, a plain-spoken former New York police commissioner. “If a lot of the evaluation is based on how the students do, that’s an incentive for the teachers to try to help the students do well, even in ways that are unacceptable.”

But the schools chancellor, Dennis M. Walcott, said in an interview that he did not believe that the increase in allegations meant that more misconduct was taking place. Instead, he credited improved reporting, driven by things like stronger whistle-blower protections and the ease of sending an anonymous complaint by e-mail. He noted that Mr. Condon proved only a few cases of cheating each year.

“People are reporting things, that’s fine; we want people to report things,” Mr. Walcott said. But, he added, “people could be reporting for real and not necessarily real reasons.”

Created more than 20 years ago, Mr. Condon’s office functions independently from the Education Department and fields all accusations of adult misconduct in the 1.1-million-student school system, including sexual abuse, theft and rarer circumstances like the drowning death of a sixth grader on a field trip last year. Over all, the office received 3,336 complaints in 2010, more than double the 1,531 it received in 2003.

The office’s 38 investigators spend much of their time on cases they are required to take by law, including conflict of interest and whistle-blower retaliation, and look into nearly all sexual misconduct claims, which accounted for about 20 percent of the total last year. Roughly another 10 percent of cases involve theft by employees and contractors.

As for cheating, there were 225 complaints last year, up from 68 in 2003; this year is on a pace to exceed that, with 155 allegations through the end of July.

Since Mr. Condon was appointed in 2002, a vast majority of the 1,252 accusations of test-tampering and grade-changing by educators he has received have been referred back to the department’s in-house investigators; city officials last week would not provide information about the disposition of those cases. Of the 62 cheating cases that Mr. Condon’s office has investigated, only 13 had been substantiated.

Cheating investigations in New York, some critics contend, have been hampered by the fact that many student answer sheets are stored for only a year after the test is administered, and by the lack of routine erasure analysis, which has played a central role in detecting cheating in Atlanta, New Jersey and Philadelphia.

The department says the school system’s practice of checking all tests for unusual erasures ended before Mr. Bloomberg took control of the schools in June 2002. But Harold O. Levy, who was schools chancellor until a few months after the mayor gained control, said, “Erasure analysis is a key part of test integrity, and under my administration we maintained it and grew it.”

The city now checks only for suspicious erasures, a telltale sign of educator cheating, in response to a specific complaint; there is no other systemwide analysis to detect cheating on the state standardized tests given in grades 3 through 8. City officials say their emphasis on security measures before and on testing days, including a requirement that answer sheets be quickly whisked to secure grading centers, reduces the need for post-test checks.

The State Education Department does not conduct routine erasure analysis either, similarly relying on whistle-blowers. “However, that’s not enough,” said Jonathan Burman, a spokesman for the commissioner, John B. King Jr., who convened a working group last month on the issue. “And that’s why, in his first two months in office, Commissioner King has moved swiftly to make test integrity one of the State Education Department’s top priorities.”

Sol Stern, a Manhattan Institute fellow who has for years studied cheating in New York, is one of several critics who have raised concern about the lack of more systematic examination. Without better investigations, he said, “we can only speculate the extent to which cheating has further undermined the value of the state tests, as a judgment on whether there have been actual gains in academic achievement of New York City school kids under Bloomberg.”

Robert Tobias, a New York University professor who was the city’s longtime head of testing before his resignation in 2001, said that at the time he left, the city was still running every student answer sheet twice through its scanning machines in Long Island City, once for scoring and once to look for suspicious patterns of erasures, a process that took about a week.

“It was a very cost-effective way of getting evidence quickly and cheaply that you would have to further follow up on,” Mr. Tobias said.

Another option would be for the state to add erasure analysis to its new five-year, $32 million contract with Pearson, a testing company, something that has been done in other states at minimal cost. In Georgia, for example, CTB/McGraw-Hill — New York’s former test provider — checked unusual erasures on all papers last year for $27,000.

“It gives us a very detailed look into behavior in the test-taking environment that we otherwise couldn’t get,” said Kathleen Mathers, executive director of the Georgia Governor’s Office of Student Achievement.

But in New York, Mr. Polakow-Suransky said, checking for suspicious erasures would be far more expensive, because the city grades its own tests.

For now, the city is continuing to rely on people, not computer programs. Mr. Walcott upped the ante on that approach this summer, asking the public to e-mail him with any accusation, after The New York Post published a series of anonymous complaints of high schools’ awarding students credit they did not deserve.

As a result, Mr. Condon is investigating 13 of the cheating complaints filed so far this year, more than double the six he did in all of 2010.

“The chancellor asked if we would look at some of them,” he said. “You know, if the president takes an interest in something, I’m sure that has an impact.”