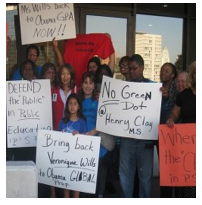 08.18.2011 - URBAN PERSPECTIVE - The South Los Angeles Community is working hard to put more pressure on the Los Angeles Unified School District to return Ms. Veronique Wills to Barack Obama Global Preparatory Academy.
Plans are in the making to get a definitive answer from LAUSD as to why Ms. Wills was removed.
The community is asserting that returning Ms. Wills is another political move by LAUSD to take away parents influence over the leadership of their schools.
Though not confirmed by LAUSD, the rumor is that Ms. Wills was removed for an administrative error.
The community supporting Ms. Wills doesn’t seem to think that an administrative error is a good reason for the removal and that this is another excuse by LAUSD to position the school for a charter school operator.
Furthermore, the community purports that other LAUSD principals have remained in their positions for more severe or egregious violations of LAUSD policy therefore this disciplinary against her is not warranted.
Ms. Wills’ removal doesn’t seem like it is going to pass without a fight. She represents what the students, parents, and locals want – a leader that incorporates stakeholder input and involvement in school governance.

(Janet Denise Ganaway-Kelly offers more than a decade of accomplishments in the housing and nonprofit sector. Janet brings valuable insight in the areas of community and economic development. Additionally, she brings knowledge regarding the leadership and management challenges faced by large and small nonprofits that are struggling or growing organizations. She blogs at jdkellyenterprises.org ) –cw