Poll: PARENTS GIVE THUMBS UP TO LOCAL SCHOOLS + the poll!

..and though reported in USA Today, its a real poll by Gallup & Phi Delta Kappa (PDK)!

17 August 2011 - A new survey finds that more Americans today like their kids' public schools than at any time in the past 36 years — even though they believe U.S. education in general has taken a bit of a dive. 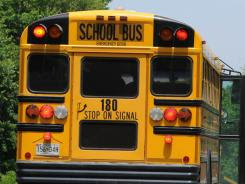 Although many Americans have soured on schools in general, nearly eight in 10 give high marks to the school their oldest child attends, according to a new survey.

Although many Americans have soured on schools in general, nearly eight in 10 give high marks to the school their oldest child attends, according to a new survey. 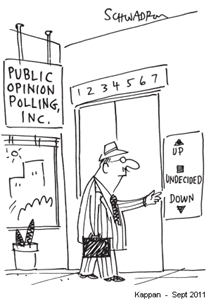 Nearly eight in 10 Americans — 79% — give an "A or B" grade to the school their oldest child attends, according to findings released today by Phi Delta Kappa (PDK) International, an educators association. That's up from 68% in 2001, and the highest percentage of favorable ratings since PDK began asking the question in 1985. That year, 71% of parents gave their kids' school top grades. 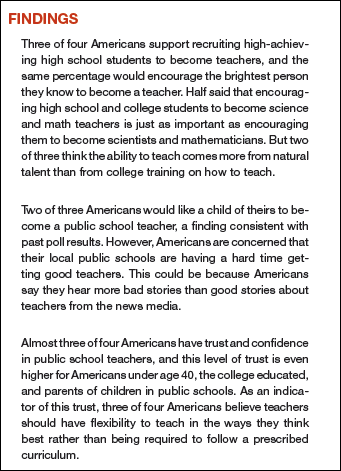 The survey is part of broader findings released annually by PDK, which has been polling the public on education trends since the mid-1970s. Bill Bushaw, the group's executive director, says the split is the most curious finding. He said parents' increased liking of their child's school may be a sign that people are more in tune with local schools' efforts at educational reform.

"I think they see the things that schools are attempting to do to transform," Bushaw said.

Mike Petrilli of the Thomas B. Fordham Institute, a Washington, D.C., education think tank, says there's evidence that many U.S. public schools are improving. But he says parents' willingness to like their child's school may stem from a kind of guilt — especially if parents can afford to pay for a private school or have moved to a neighborhood with higher-performing schools.

"Who's going to give their kid's school a low grade unless they're poor and they're trapped?" he says. "There'd just be too much cognitive dissonance to admit that your child's school" isn't up to par.

The overall drop in opinion of U.S. schools coincides with reports that the quality of schools in the USA is slipping compared to other nations.

PDK/GALLUP POLL: The Public’s Attitudes Toward their Public Schools (2011)
Posted by smf at 3:30 PM