STUDENTS IN STATE SHOW GAINS IN ENGLISH AND MATH SCORES: Overall, 54% of students scored at the 'proficient' level or higher in English-language arts and 50% scored proficient or better in math, the highest scores since testing began in 2003.

LAUSD may reconstitute David Starr Jordan High School in Watts, meaning that every employee would have to reapply for their jobs or accept transfers elsewhere.  (photo: Luis Sinco / Los Angeles Times / January 12, 2011)

August 15, 2011, 10:04 p.m. - California students showed moderate gains in English and math on standardized test scores released by the state Department of Education on Monday, continuing a long-term trend. But the results also reveal that the state has a long way to go to bring students up to grade level.

Overall, 54% of California students scored at the "proficient" level or higher in English-language arts, compared with 52% last year; and 50% scored proficient or better in math, compared with 48% last year. The scores are the highest since the standards-based testing began in 2003.

There was a small decline in math and English for students scoring at the two lowest levels: "below basic" and "far below basic." About 27% of students remain at those levels in math; 19% in English.

The results for the Los Angeles Unified School District, the state's largest school system, also mirrored past years: Growth was better than for the state overall, but scores still fell below the state average.

"We are at our highest point in student achievement," said L.A. schools Supt. John Deasy, who praised the "amazing hard work" of teachers and administrators.

The test scores are being used to give schools and individual teachers a rating on their effectiveness. Ultimately, Deasy would like to include them in teacher evaluations.

State and local education officials released the scores at Reseda High School in the San Fernando Valley, a campus that demonstrates both progress and the long climb ahead.

"Heroic work has been going on as we see here today," said state Supt. of Public Instruction Tom Torlakson.

Over the last four years, the total of Reseda students who score at grade level or better in English rose from 39% to 47%; the percentage actually dipped slightly this year. In math over that period, the figure rose from 18% to 22%.

About two-thirds of the school's students are low income and 18% are learning English.

Reseda also illustrates an ongoing problem throughout the state. Test score gains are highest in elementary schools and drop off precipitously in middle and high school.

The reason for this is much debated. In part, Deasy said, elementary campuses have more of a schoolwide approach to preventing individual students from falling behind.

Middle and high schools, typically divided into academic departments, can become "isolated from the students," Deasy said. "When a student is struggling in freshman algebra, is there a universal team of adults who know the student well and monitor the student?"

Another possibility: The school system also has focused more on teacher training at the elementary schools.

Another persistent issue is the sharp achievement gap separating Asian and white students from Latino and black students, although the latter groups saw gains.

Statewide, 76% of Asian students and 71% of white students were proficient or better in English, for example, compared with 42% of Latinos and 41% of African Americans.

The state oversees testing for students in grades two to 11.

8/15/2011 07:42:46 PM PDT - When it comes to students' basic understanding of math and English, all boats are rising in the South Bay, with virtually every school district in the area posting incremental gains, according to a batch of test scores released Monday.

But areas of concern remain, most notably in the Centinela Valley high school district, where just 11.4 percent of the students at Leuzinger, Hawthorne and Lawndale high schools scored "proficient" or better in mathematics on tests designed to measure student mastery of the state-set standards.

Known as the Standardized Testing and Reporting (STAR) program, the figures released Monday are based mostly on performance on what is known as the California Standards Test, which students in grades two through 11 take every spring. Monday's scores are not to be confused with the better-known Academic Performance Index - or the API - which assigns a single score of 200 to 1,000 to every school. Those figures will be released on Aug. 31.

The steady improvement in the South Bay is a reflection of what is happening statewide, where the percentage of students making the grade in math and English has risen steadily every year since the introduction of the program nearly a decade ago. For instance, in 2003, little more than a third of California's students were on track in math; today, 50 percent score proficient or advanced. The rise of proficiency in English language arts has followed a similar trajectory: 35 percent proficient or better in 2003 to 54 percent now.

"The significant and sustained improvements we've seen for nine consecutive years prove how hard teachers, school employees, administrators and parents are working to help students achieve despite budget cuts that have affected our schools," state Superintendent of Public Instruction Tom Torlakson said in a statement. "Their heroic teamwork is paying off for California."

In the South Bay, little has changed in the way the school districts stack up, with public schools in Hermosa Beach, Manhattan Beach, Palos Verdes and El Segundo posting the highest rates of proficiency in both areas. In math, for instance, the figures were 89.3 percent, 81.5 percent, 78.3 percent and 69.5 percent, respectively.

The South Bay districts whose rates of proficiency most closely reflected statewide averages were the K-8 districts in Lawndale and Hawthorne, where the figures generally ranged from 50 to 60 percent.

The most impressive growth this year happened in the K-8 Wiseburn School District, which was already performing fairly well.

That school district in west Hawthorne saw its math proficiency jump 7 points, to 64.1 percent. The boost vaulted Wiseburn - composed of Dana Middle School as well as Anza, Burnett and Cabrillo elementary schools - past the Torrance Unified in mathematics. Wiseburn had already surpassed Torrance in English, meaning it now posts the sixth-highest proficiency rates in the South Bay in both subject areas - directly behind Redondo Beach.

In Torrance, the gains were modest: about 1 percentage point in both English and math, bringing the proficiency rates to 71 and 61 percent, respectively.

LAUSD officials noted that students managed to make gains despite some $1.5 billion in cuts to the district's budget and a school calendar that was cut by a week.

"It seems counterintuitive to say that amidst terrible cuts, students at LAUSD are reaching their highest points of achievement ... but these results show the amazing hard work of our staff," Superintendent John Deasy said during a news conference at Reseda High School.

About 10 percent of LAUSD schools are in the South Bay and Harbor Area.

Posting the second best gains in the South Bay was the K-8 Lennox School District, which serves perhaps the poorest group of students in the region. Lennox's 5.5 percent climb in math has pushed the district's proficiency rate in that subject to 58 percent - comfortably above the statewide average of 50 percent. Its English proficiency also rose by an impressive 4 points, to 45 percent, though that remains 10 points behind the state average.

Joann Isken, the district's assistant superintendent of educational services, attributed the good news largely to a math program launched in the Lennox elementary schools four years ago that blends mathematics and verbal processing. For instance, after the teacher's daily lesson, math students in Lennox are required to form small groups, where they solve problems by talking to one another.

This fall, Lennox Middle School will offer its first-ever geometry class to a class of 30 advanced eighth-graders, 93 percent of whom scored proficient or better in math last spring.

"We are very excited about it," she said.

Also showing strong gains was the K-8 Lawndale School District, where both English and math proficiency rose by 4 points, to 55 and 60 percent, respectively.

Betsy Hamilton, the district's assistant superintendent of educational services, tied the success in part to how Lawndale is among the only districts in the region to avoid dreaded furlough days or layoffs.

She also credited a focus on daily assessments of how students are learning. For instance, elementary students might all receive a mini white board on which to scrawl answers, providing valuable feedback to teachers on whether to move on to the next concept. In the middle schools, students do the same thing, but with hand-held digital clickers.

"It's called shortening the feedback loop," Hamilton said. "The more direct specific feedback you get about your learners, the more effective the teaching process will be."

In the long-struggling Centinela Valley Union High School District, officials said good news is on the way: according to their preliminary calculations, large gains are in store for the district's API scores.

But Ben Wolf, the district's assistant superintendent of educational services, acknowledged that math scores there are in drastic need of improvement.

"That's going to be our focus this year, now that we've gotten our English Learner scores and English scores up," he said.

Centinela Valley's math proficiency rate of 11.4 percent represents a minor uptick from last year's 10.7 percent, but is still far below the statewide average of 50.3 percent.

But Wolf noted that it isn't fair to compare high school districts to K-12 or elementary districts for several reasons. For instance, high school students often are not as motivated as younger students on standardized tests. 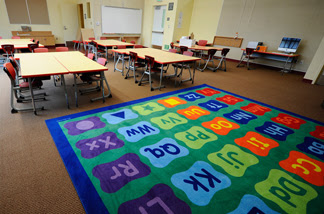 "We are not where we want to be, yet," Deasy says. "But we surely are nowhere near where we used to be in LAUSD. Knowing this pace with which we can continue is only able to encourage us to demand more of ourselves, more of our students and more of our parents."

Deasy argues that the improvements are impressive because budget cuts are hurting classroom instruction.

Just over 20 years ago, California’s Board of Education put down on paper what students should be learning each year in math, English, science, social studies and history. And these yearly tests, given to students from second to 11th grade, are the state’s way of making sure that’s happening. It’s not for many students.