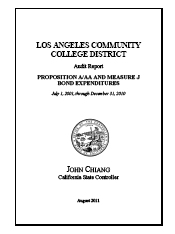 8/10/2011 - 11:32AM - SACRAMENTO — State Controller John Chiang today released an audit of the Los Angeles Community College District's (LACCD) bond construction program. The audit questioned more than $140 million in district spending related to three bond measures approved by voters between 2001 and 2008. The LACCD could not produce complete and timely records, spent funds outside voter-approved guidelines, ignored its own procurement rules, failed to plan effectively, and provided poor oversight of bond funding.

"Local voters raised their property taxes for a major investment in workforce development and higher education," said Chiang. "Shoddy fiscal management and sub-par oversight of a project of this magnitude will undermine the public's trust and threaten billions of public dollars."

"Taxpayers deserve more accountability and tighter fiscal oversight to maximize the return on their investment."

LACCD is the largest community college district in the United States. It serves more than 250,000 students annually at facilities spread throughout 36 cities in the greater Los Angeles area. The district’s voters passed three consecutive measures – Proposition A, Proposition AA, and Measure J – authorizing funds to construct, repair, improve, expand, and upgrade facilities. Together, the three measures increased property taxes for a median household within the district by approximately $123 a year.

Each ballot measure contained a project list specifying where the funds would be used upon voter approval. To aid the development of these projects, the LACCD also applied for and received $214 million from state bond funds.

The Controller's audit found that LACCD inappropriately used $42.64 million in Measure J bond funds outside of the measure's approved project list. In some cases, Measure J funds were used to complete projects that were supposed to be completed with Proposition A/AA funding. In other cases, Measure J funds were used to construct buildings that did not appear on the approved project list. For example, Measure J set aside funding for a technology building at the Trade Technology Community College, but after the measure's passage, the college's administrators decided to leave technology programs in older structures and use the new building for general classrooms and teacher offices.

The audit also found that LACCD did not provide adequate oversight of the spending practices of its three dozen colleges, and the decentralized administration of the bond funds led to $28.3 million being spent on projects that were canceled before completion. LACCD could not readily provide a list or accounting of canceled projects, and had to develop these records during the course of the audit. The audit also identified district-wide costs that were inappropriately charged to the bond funds, including $2 million for copying and binding; $1.5 million for public relations, tours and special events; and $1.5 million for photography.

After spending approximately $86 million in district bond, state and federal funds to develop a satellite campus at the Van de Kamp site, the Los Angeles City College determined that it had insufficient operating funds to operate the site, and returned it to LACCD. However, LACCD lacked sufficient operating funds to maintain it as a campus, and now is leasing most of the site to a charter school for five years. Because of related litigation, the district was not able to provide many of the financial documents related to the Van de Kamp site. For that reason, the site's purchase and renovation were not included in this audit.

State law requires additional oversight of bond funding by citizen oversight committees – that are responsible for actively reviewing and reporting on construction projects. But public records show that LACCD's citizen committees were passive, perfunctory, and ineffective. The head committee, which is required to issue annual reports, failed to issue any report for seven years. The latest report was found to be virtually meaningless, noting only that the committee members had met and providing no evidence that they thoroughly scrutinized bond expenditures.

The audit also examined the district's creation of an Inspector General for bond funding. The Inspector General position was designed to be an independent entity guarding against waste, fraud, and abuse. But when establishing this position, the district ignored its own procurement rules and – at least in appearance – compromised the integrity of the new role. LACCD ultimately selected an outside consulting firm that was formed just before the district went out to bid on the contract, led by a principal with no audit or legal experience, and who was not qualified under the Principles and Standards of the Association of Inspectors General. The LACCD's selection process also rated nine of the eleven respondents (companies) as more qualified for the work, but could not explain why they were removed from consideration. In addition, the chosen consulting firm's proposal cost $250,000 more annually than an international auditing firm's proposal.

While LACCD has spent more than $2.75 billion to date in its bond construction program, it has done so without a centralized, district-wide facilities master plan with project cost estimates, the audit found. The purpose of a master plan is to build a framework for orderly growth of public institutions while gauging costs and future needs. In addition, the audit notes that LACCD continues to expand campus facilities without empirical data to demonstrate that it has a viable source of revenues to operate the expanded facilities.

The complete audit can be found here or following.