May 4, 2011  - Fewer than half of American eighth graders knew the purpose of the Bill of Rights on the most recent national civics examination, and only one in 10 demonstrated acceptable knowledge of the checks and balances among the legislative, executive and judicial branches, according to test results released on Wednesday. 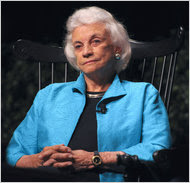 At the same time, three-quarters of high school seniors who took the test, the National Assessment of Educational Progress, were unable to demonstrate skills like identifying the effect of United States foreign policy on other nations or naming a power granted to Congress by the Constitution.

“Today’s NAEP results confirm that we have a crisis on our hands when it comes to civics education,” said Sandra Day O’Connor, the former Supreme Court justice, who last year founded icivics.org, a nonprofit group that teaches students civics through Web-based games and other tools.

The Department of Education administered the test, known as the nation’s report card, to 27,000 4th-, 8th- and 12th-grade students last year. Questions covered themes like how government is financed, what rights are protected by the Constitution and how laws are passed.

Average fourth-grade scores on the test’s 300-point scale rose slightly since the exam was last administered, in 2006, to 157 from 154. Average eighth-grade scores were virtually unchanged at 151. The scores of high school seniors — students who are either eligible to vote or about to be — dropped to 148 from 151. Those scores mean that about a quarter of 4th- and 12th-grade students, and about one-fifth of 8th graders, ranked at the proficient or advanced levels.

“The results confirm an alarming and continuing trend that civics in America is in decline,” said Charles N. Quigley, executive director of the Center for Civic Education, a nonprofit group in California. “During the past decade or so, educational policy and practice appear to have focused more and more upon developing the worker at the expense of developing the citizen.”

One bright spot was that Hispanic students, who make up a growing proportion of the country’s population and student body, narrowed the gap between their scores and those of non-Hispanic white students. On average, Hispanic eighth-graders scored 137 and non-Hispanic whites 160. That 23-point gap was down from 29 points in 2006.  Among high school seniors, the gap narrowed to 19 points from 24 points.

The achievement gap between blacks and whites in civics, about 25 points at the fourth- and eighth-grade levels and 29 points among high school seniors, did not change significantly.

The results showed that a smaller proportion of fourth and eighth graders demonstrated proficiency in civics than in any other subject the federal government has tested since 2005, except history, American students’ worst subject.

“We face difficult challenges at home and abroad,” Justice O’Connor said in a statement. “Meanwhile, divisive rhetoric and a culture of sound bites threaten to drown out rational dialogue and debate. We cannot afford to continue to neglect the preparation of future generations for active and informed citizenship.”

"This is one of the main reasons why our government doesn't work - most Americans don't know what it does, where it came from, and why it's here. How can we expect intelligent discussion about something people are entirely ignorant about? "

“Civics is not tested. Because it’s not tested it’s not taught. It’s like art and music and health education and ethics and independent thinking. If they mattered they’d be on the test.”

A version of this article appeared in print on May 5, 2011, on page A23 of the New York edition with the headline: Civics Education Called National Crisis.