SACRAMENTO — State Superintendent of Public Instruction Tom Torlakson today released the results of the 2010-11 California English Language Development Test (CELDT) that shows a modest decline in the percentage of English-learner students at the advanced and early advanced performance levels this year over last, but still higher than in the 2006–07 school year.

"These results demonstrate that the valiant efforts of teachers and school administrators to help our students become fluent in English are being undermined by budget cuts that are crowding classes and shortening the school year," Torlakson said.

"For years we've been asking our schools to do more with less, and somehow they have managed to deliver. That cannot go on forever. The only way to achieve and sustain the excellence we want for English learners and all students is to invest in our schools again," he said.

Torlakson also announced California is partnering with the Council of Chief State School Officers to compete for additional funds available from the U.S. Department of Education to create a new English-language proficiency assessment system aligned to the new college and career ready standards.

"As the state that is home to one of every three English learners in the nation and, as such, we are in a unique position to lead this effort, and I am very optimistic that our efforts will be successful," he said.

The new English-language proficiency assessment would replace the current CELDT for English learners. Applications are due to the U.S. Department of Education by June 3, 2011 with awards scheduled to be announced in the early fall.

The CELDT assesses the English-language proficiency of students in kindergarten through grade twelve. These results are used to calculate Annual Measurable Achievement Objectives (AMAOs) for federal accountability requirements.

Compared to the rest of the nation, California has the greatest number of students whose primary language is not English. More than 100 languages are spoken by the state's English learners, of which approximately 85 percent speak Spanish.

The overall annual assessment results for 2010–11 show that more than 37 percent of the 1,253,583 English learners who took the CELDT in California's public schools scored at the early advanced (29.4 percent) and advanced (8 percent) performance levels (see Table 1). Between 2006–07 and 2010–11, the percentage of English learners scoring at the early advanced or advanced performance levels increased more than 5 percent (see Table 1).

The CELDT criterion is synonymous with AMAO 2, the percentage of English learners attaining English proficiency on the CELDT, for federal accountability under Title III of the Elementary and Secondary Education Act.

The CELDT is one of four criteria in state law to be used by schools in determining whether or not an English learner should be reclassified as fluent English proficient. Other criteria include comparison of performance in basic skills (e.g., the California Standards Test in English-language arts, which is part of the Standardized Testing and Reporting Program), teacher evaluation, and input from parents. Each school district establishes its own local reclassification procedures using these criteria.

Results of the 2010–11 CELDT show that 34.5 percent1 of English learners met the CELDT criterion for possible reclassification with the greatest percentage in grades six to eight (see Table 2). Although there was a slight decline in percentage this year compared to last year, there had been steady growth in English-language proficiency performance on the CELDT since 2006–07.

School, district, county, and state results of the 2010–11 CELDT Annual Assessment are available on the CDE Web page at CELDT Reports.

1 Weighted average across the grade spans within the school year. 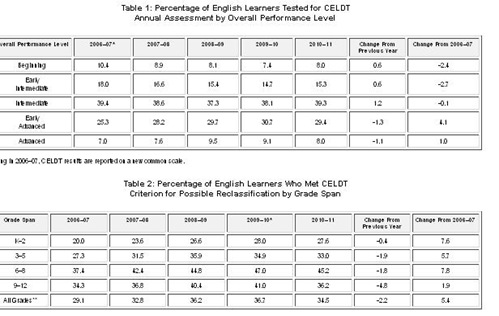 *Beginning in 2006–07, CELDT results are reported on a new common scale.

* Prior to 2009–10, the calculation of the CELDT Criterion for kindergarten and grade one (K–1) only includes listening and speaking scale scores.

** Weighted average across the grade spans within the school year.

Census R–30 Web page will be available by this summer.