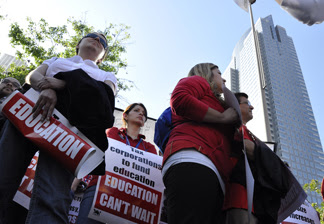 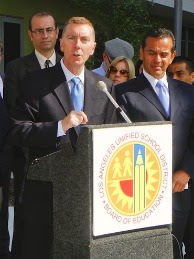 27 May 2011 - 4:48 p.m. | The Los Angeles Unified School District announced today it has reached a tentative agreement with its largest union, which could save about 3,400 jobs and maintain class sizes in elementary schools at their current levels.

In exchange, United Teachers Los Angeles members would take four furlough days in the coming school year -- three teaching days and one day when students are not in school.

The four furlough days will cancel out all but 1600 of the 5,000 preliminary dismissals the school district sent to employees with teaching credentials.

The teachers union said LA Unified could rescind all those notices. The school district did not predict the same.

"While this agreement does not restore all the cuts -- because our schools are still drastically underfunded -- it goes a long way toward providing the resources and personnel for our students to succeed,'' LAUSD Superintendent John Deasy said in a statement.

The agreement hinges on how much money may land in state coffers. Recent predictions suggest that this year’s picture looks a lot better than last year’s, but if the state budget sinks further into the red, L.A. Unified teachers would have to take six furlough days instead of four. If districts receive unexpected money, they’d subtract employee furlough days.

"This agreement demonstrates that when UTLA and the district collaborate, problems can be solved to the benefit of our students,'' UTLA President A.J. Duffy said.

Teachers and the school board still must approve the furlough deal. Teachers took seven unpaid furlough days this school year.

The deal between the teachers union and L.A. Unified could save $42 million and thousands of jobs. The agreement requiring teachers to take four unpaid days off must be ratified by union members.

United Teachers Los Angeles march on Tuesday to demand the school board rescind layoff notices. On Friday, the teachers union agreed to a deal with the district to accept four unpaid work days in order to save the district money and potentially save thousands of jobs. (Liz O. Baylen / Los Angeles Times / May 24, 2011)

May 27, 2011, 8:14 p.m. - Los Angeles teachers will take four unpaid days off next year to help offset the city schools' estimated $408-million budget deficit, according to a tentative agreement reached Friday.

The deal between the teachers union, United Teachers Los Angeles, and the Los Angeles Unified School District would save the district about $42 million if ratified by union membership and would be the third consecutive year that teachers have agreed to furlough days, which essentially are a pay cut.

Citing the projected shortfall, the school board voted earlier this year to issue nearly 7,000 preliminary layoff notices to employees.

The teachers union is the sixth labor group in the school district to agree to furlough days. The other unions had agreed to six furlough days, but will now only take four unpaid days off, officials said.

The school board could rescind about 3,400 of the layoff notices, which would include teachers as well as librarians and nurses. An additional 1,700 jobs could also be saved or created, depending on how many employees retire and whether school principals decide to hire more teachers.

About 2,000 employees' jobs could still be at risk, district officials said.

The agreement marks the end of a long and at times contentious negotiation between the teachers union and the district.

Supt. John Deasy had pressured the union to agree to a deal through public statements as well as on Twitter, and teachers union officials had said they believed other revenue sources could be used to solve the budget deficit.

This week, teachers union President A.J. Duffy told a cheering crowd of hundreds of teachers that he did not want to accept any furlough days.

But on Friday, Duffy said he was pleased that the union and district had reached a compromise. "To save as many as 5,000 jobs is huge for me," said Duffy, who has served two terms as the union's leader and is leaving office in July.

Under the agreement, teachers may end up with fewer furlough days if the district's financial picture improves. If the deficit does not shrink, the educators may be required to take up to six unpaid days off.

The other unions that have already accepted furlough days will have the same deal. The only two labor groups that have not agreed to the time off without pay are the Teamsters and the California School Employees Assn.

Deasy said the deal should lead to less instability on campuses and better instruction for students.

"It was a very long process … but I'm pleased we can give the kids what they deserve," he said.