CALIFORNIA STILL LEADS THE U.S., INCLUDING IN INEQUALITY + A PORTRAIT OF CALIFORNIA/A Measure of America

The Golden State has always seen itself as the best, and it still is for some, but a new study of federal census and state data covering longevity, education and income shows the state is also home to arguably the worst-off parts of the nation.

Its diversity, continued attraction to immigrants, and a fast-changing economy that is still the world's eighth largest make it a harbinger for the globe as well as the nation, according to the study released this week.

"Some Californians are actually enjoying the highest levels of well-being in the world, where the rest of the world won't be for another half-century," said Kristen Lewis, one of the authors of "A Portrait of California."

But the report by the American Human Development Project, which uses United Nations-based indicators of health, wealth and education rolled into a Human Development Index score, also sheds light on less fortunate parts of the state. (report follows)

The Los Angeles neighborhood of Watts, which exploded in riots in 1965, only now scores at levels enjoyed by the rest of the county that year, while a companion study found the nation's worst-off congressional district to be in Fresno, California -- not the Mississippi Delta or Appalachia as researchers had expected.

The reputation of the most populous U.S. state as home of the good life has been tarnished as the mortgage crisis stripped families of homes, while the state's financial problems have undermined the education system and sense of opportunity that gave California its glittering reputation.

Many of the contrasts in the state, which after all has inspired "Grapes of Wrath" Depression-era tales as well as Disneyland, are tied in some way to education and immigration.

Education and income tend to go hand in hand, but some of the longest-living Californians are Latino immigrants at the bottom of the pay and education scales -- whose native-born children die earlier.

"The longer Latinos live in the United States, the shorter they live," Lewis said.

The report breaks down the state into "Five Californias." They range from the affluent towns of Silicon Valley, such as Cupertino, home to Apple Inc, and Mountain View, where Google Inc is based, followed by well-off metropolitan coastal enclaves.

A group of mostly minority citizens in California's suburbs and exurbs make up the middle class, or about 40 percent of the population. An equally large group that also includes rural areas is labeled "Struggling California." Both are trying to fit into a state that wants highly skilled or unskilled labor, without much demand in the middle.

"All over the U.S., the labor market is diverging, and it's creating an hourglass shape," Lewis said.

A "Forsaken" 5 percent, whose life expectancy is nine years less than those at the top and who tend to live in impoverished neighborhoods in Los Angeles and the farming-dependent Central Valley, make up the bottom stratus in the state.

In the San Francisco Bay Area town of San Ramon, only 2.6 percent of adult residents did not finish high school, compared with 63.3 percent in the Vernon Central area of Los Angeles.

The top and bottom groups have one thing in common: a third of each was born outside the United States. But while the top demographic features engineers from Asia, the bottom contains mainly Latinos with a high school education or less.

Measures of state public education have dropped because of the financial crisis to the point where California in some ways now ranks 49th to 51st against other states and the District of Columbia.

"California is really losing its edge in terms of education," said Lewis.

But the statistics don't necessarily tell the whole story -- many Latino immigrants drag down the state average because they cut short their education to come to California, but their children are hitting state norms.

A Portrait of California

ORDER Hard copies of the report are available for purchase at $15 each to cover printing and shipping costs. For educational and bulk discounts, please contact diana@measureofamerica.org.

A Portrait of California goes beyond the state’s fiscal and budgetary woes to examine the well-being of its people using the American Human Development Index, a measure based on official government data in health, education, and living standards. This timely report introduces the ‘Five Californias’ to highlight the varied opportunities open to differing segments of the population, and provides close-up snapshots of major metro areas. The report also ranks native-born and foreign-born residents for each major ethnic group, as well as all 233 Census neighborhoods in the state. The report concludes with recommendations aligned with current fiscal realities for protecting and building upon human development successes already in place.

A Portrait of California highlights actions that Californians can take to lock in human development successes today while setting the stage for significant budget savings and improved well-being tomorrow. These include investing in public health campaigns and food subsidies for fruits and vegetables; investing in preschool and targeting the worst performing high schools with the highest dropout rates; and taking steps to address gender equality and wage discrimination in the workplace. 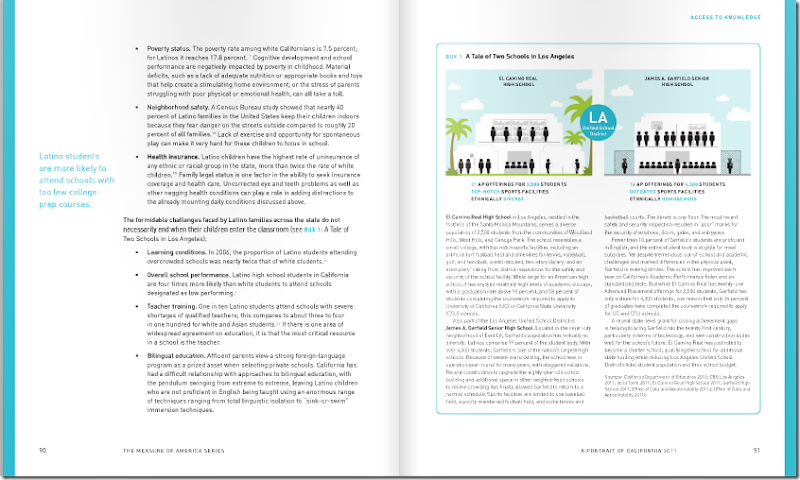