The Los Angeles Board of Education on Tuesday approved a plan under which at least half the teachers and other employees at Huntington Park High School would be replaced by early July, when the new academic year begins at the year-round campus.

The board action, approved unanimously and virtually without comment, came as an emotional demonstration took place on the streets outside the crowded meeting room at the district’s  headquarters, just west of downtown.

About 300 Huntington Park High students rallied in defense of their teachers, after having marched about seven miles from the campus following a morning walkout.

“We don’t want our teachers fired,” said 11th grader Jonathan Rojo. “The school will be messed up and disorganized.”

Next to him, students were chanting: “Fight for rights” and “Save HP.” They also shouted, “Let him go” when a phalanx of school police officers detained a student organizer. Officers said the student might be inciting others to be too aggressive in their demonstration. The student returned moments later to rejoin the peaceful protest.

Inside the meeting, several speakers, including a teacher, two parents and two students, also decried the board action as wrongheaded or too hasty for the school of about 4,000 students.

“My greatest problem with this is the time limit,” 11th grader Julian Zatarain said in Spanish. “What makes the board think that six weeks is enough time?”

But L.A. schools Supt. John Deasy defended the strategy and the pace.

“I understand this nature of pushing things quickly,” he said. But to do otherwise would be to deny justice to poorly served students, he said.

Deasy, who became superintendent in mid-April, agreed to move up the plans for the school by a full year at the behest of school board member Yolie Flores, who represents the Huntington Park area.

In a brief presentation, Deasy said that 1 in 3 Huntington Park freshmen drop out and only 7 out of 100 go on to a UC or Cal State campus four years later. Just 5% of students tested "proficient" last year in the math courses they took.

The Alliance for a Better Community, which has been closely allied with the school-board majority and advocates for the local Latino community, spoke in favor of the board action.

In an interview, senior Veronica Franco said she understood the imperative for change but added that at least 80% of the teachers deserved to return, “because they put 110% to students.” 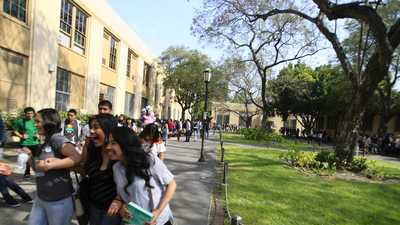 An estimated 250 to 300 students from Huntington Park High School organized a walkout to protest the anticipated replacement of at least half the school’s teachers.

The Los Angeles Board of Education is scheduled to vote Tuesday afternoon on the aggressive school-improvement strategy, which has been pushed by board member Yolie Flores, a graduate of Huntington Park High who represents the area.

According to one walkout participant, students gathered in an outdoor area of campus and refused to go to class at about 10 a.m. The intended destination of protest leaders was the headquarters of the Los Angeles Unified School District, located just west of downtown, where a public meeting was scheduled to begin at 1 p.m. The nearly seven-mile trek through busy city streets was expected to take two hours or more.

An estimated 10 to 15 adults from the school were accompanying the students, a standard precaution to try to keep students safe.

An internal district memo indicated that no bus transportation would be provided to return students to campus. For some past protests the district has provided such transportation as a safety measure.

One participant emailed that students were upset at both the dismantling of the school and exception that is being made for Libra Academy, a new small school on the edge of campus. Libra has higher test scores than the school at large, a reason Flores cited both for preserving Libra and starting over at the main campus.

Students “find it very unfair that the adjoined school Libra with its hand-picked higher-achieving students will not be affected by the change,” said the participant, who identified himself as Joey.

Applicants are admitted to Libra by random lottery, but its pool of students is higher-performing before high school than other Huntington Park students, according to data compiled by teachers at the high school.

Some students interviewed on campus last week objected to the pending loss of familiar teachers, although most students had little familiarity with the pending board vote at the time they were questioned. 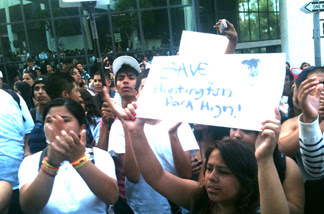 More than 300 students walked out of Huntington Park High School and marched seven miles to Los Angeles Unified School District headquarters on Tuesday, May 10, 2011. They marched to protest a plan to overhaul the low-performing school. The school district plans to move half the school's teachers this summer to improve lagging test scores.

HUNTINGTON PARK (KTLA) -- Hundreds of students walked out of class Tuesday to protest the budget cuts and layoffs proposed by the Los Angeles Unified School District. To reply to a Comment: Click "Reply" at the bottom of the comment; ...

Do you want chocolate milk banned at school?

Jamie Oliver is leading the charge to get flavored milk banned from schools and the Los Angeles Unified School District is following his lead. Do you want schools in your school district to get rid of milk with added sugar? The flavored milk debate is ...

LAUSD to replace half the teachers at Huntington Park High - report

Superintendent John Deasy, who started mid-April, has vowed to reform the Los Angeles Unified School District, the second-largest school system in the country. The district is requiring faculty to re-interview for jobs at five low-performing schools, ...

I currently attend H.P and i hate how they got rid of the old teachers who took pride in h.p. Most of the new ones dont care for h.p.h.s