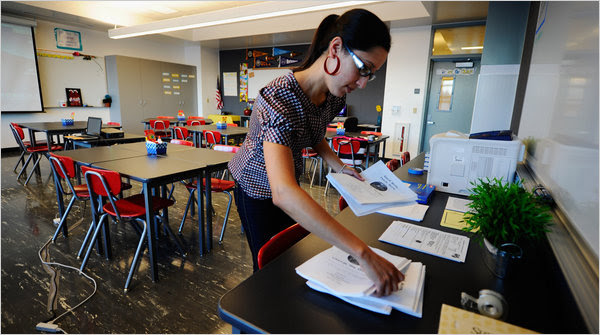 May 5, 2011  - As states and cities debate whether benefits can or should be cut back for public workers, a new study suggests some of those workers have a lot more to fight for than others.

The study found that public school teachers’ retirement benefits — at least the part taxpayers pay for — are smaller than those of virtually any other type of public employee, despite frequent claims that teachers’ pensions are excessive and diverting precious dollars from education and other essential government services.

It appears, in fact, that the teachers in the study would be better off if their current pension plan were scrapped entirely, and replaced by one cutting the defined benefit portion and adding a defined contribution feature. Public employees, and the unions that represent them, have generally resisted any such shift, arguing that a traditional defined-benefit pension provides the best security in retirement.

The study, by the California Foundation for Fiscal Responsibility, analyzed employee benefits only in that state, one of the most fiscally troubled and the seat of a long-running debate about public pensions and whether they are crowding out other public spending. But the foundation’s president, Marcia Fritz, said her researchers had devised a straightforward way of comparing retirement benefits that could be used easily by analysts in other states.

Ms. Fritz, an accountant who has long been calling for pension changes in California, said she was stunned by the difference between the teachers’ retirement benefits and what other state and local workers received.

The study was released as debate becomes heated in California over how much public pensions are to blame for the state’s fiscal woes and what to do about it. Gov. Jerry Brown has said he would use some type of pension cuts to help bridge the state’s $15 billion budget deficit, but he has also said current workers’ benefit formulas cannot be changed in mid-career. Fiscal hawks, and some lawyers, say that approach is too timid. Public employees’ unions, meanwhile, say their members are being wrongly blamed for a small number of cases in which people gamed the system and retired on giant pensions.

Ms. Fritz said she wanted to come up with a standardized way to compare retirement packages to guide the process. Her study compared the pensions and retiree health benefits of different types of state and local workers in California, as well as those earned by federal employees, and by workers at a sample of large companies, including Chevron, Cisco, McKesson, Northrop Grumman, Qualcomm and Safeway.

It also examined how California’s various state and local employees would fare under two proposals, one modeled after the federal employees’ retirement plan, and the other a straight 401(k) plan.

Aside from the teachers, many public employees in California would be worse off under the proposed changes, the study showed.

Pension comparisons are fraught with difficulty, in part because the benefits are paid out one check at a time over many years. The foundation tried to make its comparisons more meaningful by calculating how much each type of retiree would have to pay up front, if the retiree wanted to buy a total lifelong pension benefit from a hypothetical insurance company. Showing the present value that way underscored the tremendous, hidden value of early-retirement benefits, something city workers in California often get, but teachers, federal workers and company employees generally do not.

Police in particular benefit. A California highway patrolman who retires at 50 gets a state-paid benefit five times what a federal law-enforcement agent would get at that age.

Because the foundation is focused on balanced budgets, it excluded the employees’ own contributions to each type of retirement plan. That allows comparisons of just the part of the benefits that taxpayers, or the corporate employers, cover. Teachers in California make large contributions to their pensions, and once those were deducted, their taxpayer-paid benefits were eclipsed by those of city workers, who can not only retire much earlier but also contribute less.

The study also counted Social Security — at least the employer-paid portion of it — as part of each group’s total benefit. Public school teachers in California, like roughly half the nation’s teachers, do not participate in Social Security, so their pensions must stretch further. Police also usually opt out of Social Security.

from the report: Finding 5:

The main reasons are:

(1) the pension formulas have relatively steeper payment reductions for those retiring early,

(2) employer-provided health care is determined by the district, and on average is less generous than the state provides, and

(3) teachers have been required to make larger pension contributions than others relative to the benefits they receive (this is especially true for past years). In addition, teachers, like CHP employees but unlike other employees considered in this report, do not participate in social security.

May 5 Presentation: Comparing Public and Private Employee Compensaton and Retrement Benefits in California

Note: Each of the links below will download a .pdf in a new window: