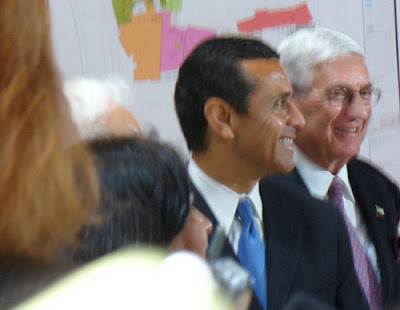 Once upon a time, doddering Republican Richard Riordan (below left) used his influence as Mayor to bring "reform" to the Los Angeles Unified School District. The reform movement not only swept many Riordan-backed candidates into office, it also made an uneasy, certainly unholy alliance with the old eastside Latino political machine. If you help us with our school reform, the Riordanites whispered, we'll make sure the (largely Anglo) teachers union doesn't win any races it shouldn't in largely Latino districts. 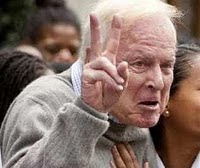 This deal--which may have helped Latinos get elected, but didn't help Latinos become better educated at all--ironically played mostly into the interests of Anglo billionaires. Riordan, a multimillionaire, was an obsequious part of a billionaire cabal in the early 1990's. The billionaires, who included Eli Broad (top), wanted to take over public education by handing the public's schools to private businesses, without the businesses having to buy the property from the state; this was the foundation of the charter school movement.

Public school teachers are unpopular, the billionaires reckoned. They're a soft target. They are perceived to work only six hours a day and nine months a year. Imagine running our own schools! We wouldn't even have to prepare students for arts, culture, living at all--we'd just have to prepare them to be grateful for a corporate job! Let's first make 'em take tests that anticipate success in corporate life! Then we'll start grabbing us some campuses!

So, the billionaires reckoned, we can easily marshal public support for charter schools. First, let's saddle the teachers with hopeless but high-stakes standards and equivalency testing. They're bound to perform poorly. That will enable us to present to the public irrefutable "evidence" that the teachers aren't doing their jobs.

[All of this, by the way, is well documented in Kathy Emery's book Why is Corporate America Bashing Our Public Schools?--a book I tirelessly recommend to anyone who cares about education.]

The Los Angeles Unified School District Board of Education has seven seats from seven districts--and at one time or another, Richard Riordan and Eli Broad have had a strawman candidate up for all seven. Most of their candidates have won (and have you seen reform? hahahahah).

The job currently pays $60,000 a year--up until recent times it was paid reptile fund chump change. Yet to mount a campaign for one of these jobs, you need to spend about a million on at least 20 direct mail pieces.

Of course, when "reform" candidates are elected to school board, they know nothing about running a large scale, high stakes election. That's where the reform machine comes in, sweeping them into office.

In the meantime, Riordan and Broad got themselves elected another Mayor who wouldn't mind acting on the billionaires' behalf. Ironically, it's a Latino mayor straight outta District 2, Antonio Villaraigosa--who supports just about every union that has ever met with him, except for one--the local teacher's union. That one is where he drew the line.

And of course it's no coincidence that the Mayor's office was not only populated with Riordanites in its early days, or that the Mayor and Broad have gotten along to the degree that things have gone smoothly for Broad in the District. 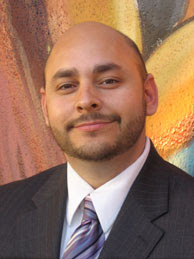 District 2's seat is the one that LA's Latino machines need to maintain the most. The seat has been in recent years passed on more by primogeniture than by ballot. Jose Huizar acceded the throne in District 2 early last decade; after him, his chief of staff Monica Garcia took it, and now her chief of staff, Luis Sanchez, with Huizar's and Garcia's endorsement and the endorsement of the LA Times, is poised as heir to the throne. All of these successful District 2 candidates were simply gifted the twin benefits of the Latino machine and billionaire "reformer" interest. All of them were well-scrubbed and impeccably manicured when they took their brochure shots with top Latino politicians. And in District 2, a group photo with top Latino politicians is enough to win. 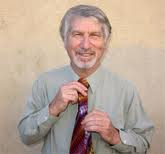 Against Sanchez, the UTLA machine is running Bennett Kayser, a longstanding teacher, recognizably Anglo and standing fairly alone in his brochures. Kayser is so old-mold, bad-shirt-and-tie school board that only octogenarian homeowners may recognize the type anymore: scruffy, rumpled, a guy who knows a lot about classrooms and wonders, as, say, Louis Pugliese might, why the district has spent so much money on buildings and athletic fields when it can't even pay janitors to clean the classrooms. He's such a throwback, Kayser could have been on the School Board in the 1960's, when educators actually ran the District.

But if Kayser is old school and out of step with today's LAUSD, Sanchez doesn't really know why he's there either; order-taker for Garcia as Garcia was for Huizar as Huizar was for Villaraigosa, he hasn't been around the district long enough to see the five construction bonds passed over an eleven year span that duped voters into thinking that they were paying for schooling and education, when they were really paying Corona contractors and Irwindale building suppliers. He may not even know that the real purpose of the big bonds were to keep the ever obsequious Riordan's banker friends well-oiled, and remake the local economy into a contractor-driven, boom-or-bust one that has ensured LA become a perpetual absentee landlord town. The ever obsequious Riordan's banker friends will continue to make money on the property tax payback through 2044, when the last dollars are paid.

The biggest problem with the school board today, after nearly two decades of "reform" that has brought the district half-billion dollar schools and fifty-cent education, is that not only are real education and reform strategies rarely discussed there, but its own history is now so lugubrious that not even the candidates themselves are fully aware of what they really are being asked by their handlers to do anymore, or why they're asked to do it. One candidate is handed one machine, one candidate is handed another, and both candidates are expected to answer to that machine at every moment right up through election day. Then the puppetmasters hope and pray that the puppets stay loyal, at least for a while. Some do, some don't. It's a crap shoot.

And as such, it is barely education at all. It is shadow puppet theater, and it is very unseemly to watch--especially when the so many thousands a year each homeowner, whether they ever have kids or not, pay property taxes that end up "educating" contractors more than they do children, and over a third of the local enrolled kids to drop out before completing high school.

Until we turn races for school board over to educators, rather than allow them to be gamed by political machines and the billionaires who make deals with them, I'm afraid it will always be thus.