The News that Doesn't Fit from September 7th

scroll down for budget news

SCHOOL GOES FROM BACKDROP TO CENTER STAGE: After appearing as a backdrop during John McCain's acceptance speech, Walter Reed Middle School in North Hollywood basks in the glory. 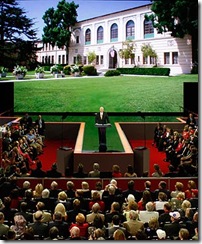 Ron Edmunds/Associated Press - John McCain accepts the Republican Party presidential nomination in St. Paul, Minn., on Thursday as a 50-foot-wide photo of Walter Reed Middle School in North Hollywood is shown behind him.


September 6, 2008  - It was an unexpected burst of glory, and the 1,600 students at Walter Reed Middle School in North Hollywood were basking in it Friday.

None of the youngsters knew for certain why a 50-foot-wide image of the front of their school was projected Thursday night behind Sen. John McCain as he accepted the Republican Party presidential nomination. But there were plenty of theories.

THE GOOD NEWS AMONG THE BAD: State Superintendent of Public Instruction Jack O'Connell praised the district's performance during Brewer's news conference at John H. Francis Polytechnic High School in Sun Valley, one of eight district schools to show the most improvement.

"It is clear the Los Angeles Unified School District is on the right track, moving in the right direction," O'Connell said.

· Meanwhile, fewer California schools than the year before are reaching the proficiency targets set by No Child Left Behind.

· About 52 percent of California schools made this year's federal growth targets, down from 67 percent the previous year.

· Within LAUSD, eight schools targeted for improvement met federal standards for two years in a row, releasing them from close scrutiny.

· And for the first time in five years, LAUSD met federal graduation requirements.

A gorgeous downtown high school has no plan, no curriculum — but sure looks fab

September 04, 2008 -- WITHOUT A NAME, A PRINCIPAL, a teaching staff or even a curriculum plan for delivering an arts-and-academics education to teenagers, it’s hard to find a soul in the massive Los Angeles Unified School District who can explain the mysterious high school with its lofty tower nearing completion downtown next to the 101 freeway.

STAND UP FOR CHILDREN: No More Cuts!

You don't have to be a PTA member to be mad as hell and unwilling to take it anymore ...this is a little song we can all join in with!

He vows to double the rate of academic improvement at the 10 campuses within the Partnership for Los Angeles Schools, his effort to see success at some of the city's poorest-performing facilities.

From the daily KOS Blog

in an entry titled: "Some things you didn't know about Sarah Palin" - which ironically proves that irony happens to the best of (first) families in Alaska.    - smf

Tuesday, September 2, 2008 -- The UCLA Graduate School of Education and Information Studies has partnered with the Los Angeles Unified School District to create the Bruin Community School, one of six pilot schools that will be implemented by the district.

August 30, 2008 - Even while grappling with funding shortfalls, the Los Angeles Unified School District is employing more than 800 consultants - paid, on average, more than twice as much as regular employees - to oversee school construction.

The Facilities Services Division spends about $182 million on its 849 consultants, almost $215,000 each. The division's regular employees are paid about $99,000 each.

The Lack of Budget News

STAND UP FOR CHILDREN: No More Cuts!

You don't have to be a PTA member to be mad as hell and unwilling to take it anymore ...this is a little song we can all join in

A State without a Budget - Day 65 begins: AM ALERT: CONTINUOUS BLOVIATIONS

Sept 3/6:02 AM -- Assembly Speaker Karen Bass cancelled plans for an Assembly floor session today. Instead, the Assembly Budget Committee will hold a hearing on the Republican budget proposal.

A State Without a Budget - Day 65 and counting: STARS OF SHAME FOR SEVEN LEADERS

LOOKING FOR SOMEBODY TO BLAME FOR THE STATE'S BUDGET DEBACLE? THESE NAMES SHOULD TOP THE LIST

A State Without a Budget: Looking forward to Day 65 - ASSEMBLY SCRATCHES WEDNESDAY SESSION

September 2, 2008 -- With no deal in sight, Assembly Speaker Karen Bass has cancelled plans for an Assembly floor session on Wednesday, instead opting to hold a hearing on the Republican budget proposal.

September 2 -- State lawmakers worked through the weekend, passing legislation ahead of the August 31 bill deadline. Both houses adjourned on Sunday afternoon.

But of the hundreds of bills they've passed, none include the 2008-09 budget, which is now in record-setting territory.

smf sermonizes: Never before has California ended a legislative session, gone more than 62 days or seen the month of September without a budget. This is not good - but rushing ahead and getting a budget for the sake of getting a budget no matter what could and/or would be worse.   "The more is on the line, the easier it is to get swept into an irrational decision." Economist Ori Brafman and his psychologist brother Rom explain in their treatise Sway: The Irresistible Pull of Irrational Behavior. Before there were self-help business books there was the itinerant rabbi from Galilee : "Lead us not into temptation".  Let us not be so led.

Some say the stalemate could last into next year, leaving the incoming Legislature to solve the problem. That will leave those dependent on state funds without the money to operate.

September 1, 2008 — SACRAMENTO — As the Legislature lurched to its close Sunday with no budget in place, California toppled its own record for fiscal dysfunction.

"What are we to do? Where do we turn?" Ortiz asked. "If we take out loans, the interest rates will kill us, not to mention all the late charges we are going to receive for our mortgages we don't pay on time."

FROM SEA TO SHINING SEA: Bellwether states are falling off the fiscal cliff

"Everyone knows that when the nation is going to hell in a hand cart, California usually gets there first. "

A State Without a Budget: Day 62 - SENATE TO MEET DAILY UNTIL BUDGET DONE

August 30, 2008 - 5:46 PM -- Senate President Pro Tem Don Perata announced Saturday that the Senate will convene every day - including weekends -- until lawmakers pass a state budget, which is now 61 days overdue.