A gorgeous downtown high school has no plan, no curriculum — but sure looks fab 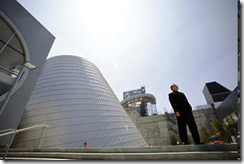 September 04, 2008 -- WITHOUT A NAME, A PRINCIPAL, a teaching staff or even a curriculum plan for delivering an arts-and-academics education to teenagers, it’s hard to find a soul in the massive Los Angeles Unified School District who can explain the mysterious high school with its lofty tower nearing completion downtown next to the 101 freeway.

Its entrance is on flashy Grand Avenue, it’s backed by billionaire Eli Broad, and the students who will attend the gleaming high school will be drawn from an inner-city geographic area with the hot-button title, “Belmont Zone of Choice.”

But at LAUSD, a caller can mention all that information and still get transferred three times before anyone has a clue as to what school the caller is asking about. (One district I.T. guy declares: “That’s a high school?”)

You’d think the district’s media handlers would have caught on by now. After all, $232 million is being poured into this public school’s building and furnishings, at about $1,000 per square foot. Its classy 950-seat performing arts theater includes a dramatic roller coaster–style spiraling tower that sprouts up like Athena from Zeus’ head. It is causing buzz as 25,000 Hollywood Freeway commuters drive by it every day, and has supplied pundits like Los Angeles Times columnist Steve Lopez material.

Yet Central L.A. High School #9, as it is currently dubbed, has something of a cart-before-the horse problem.

High School #9 also reflects extensive design work to deliver the right kind of space and equipment for special classes focused on the arts. But if anyone needs a reminder that a school’s success is never determined by the fine materials used in the building of it, or the price of the educational equipment that fills it, they need only look at disturbing recent examples within the LAUSD: the disastrous test scores and dropout rates at beautiful new Jefferson and Locke senior high schools.

Caprice Young, former LAUSD school board president and a charter school expert, says, “Most of L.A. high schools are horrific. ... I know we have the capacity to do this in Los Angeles. I'm not sure in L.A. Unified.”

And Linda Darling Hammond, professor of education at Stanford and co-director of the reform-oriented Schools Redesign Network, says it’s not the buildings but “the quality of the work they put on the table for the kids to engage in that matters most.”

As of now, despite all the school’s features — gallery spaces, separate buildings for dance, music, theater and the visual arts, a black-box theater for minimalist productions, and on-campus art studios — the district has no curriculum for the school, which opens in one year. In short, they do not know how they are going to teach the 1,700 students.

Richard Alonzo, superintendent of the small “subdistrict 4” that oversees public schools in the area, including downtown, says, “There are so few models that are successful models of what we are trying to do” — namely, using the arts to improve achievement among typical students from a dense urban environment — that he can’t name a single such school succeeding anywhere in the United States.

THAT MAKES LAUSD’S latest, big-ticket school a huge risk — an experiment with no track record. Alonzo says he has visited a string of elite, audition-based high schools, including Houston School for the Arts, LaGuardia High School in New York and the Orange County School for the Performing Arts. Yet such high-powered, selective schools have little in common with High School #9. The students won’t be chosen from hotly competing art students, as with the several top high schools cited by Alonzo. About 1,200 of the 1,700 students will be drawn from the immediate area, heavily dominated by working class and poor Latino families. Sounding hopeful, former art teacher Alonzo says, “This is a community-based school. Students will want to go there.”

Ben Fonseca, outreach coordinator for the tiny Los Angeles County High School for the Arts, a highly selective, audition-based public school located on the campus of Cal State L.A., notes that “We are excited because so many kids are rejected from” his specialized school. “We need more arts high schools in Los Angeles.”

That may be. But will kids pouring into High School #9 from the downtown-area’s deeply troubled middle schools really learn English and math, and fulfill graduation requirements via an arts program? Or will LAUSD simply continue to produce the massive dropout rates and functional illiteracy seen at other new schools in the urban core, à la Jefferson and Locke?

Nobody knows, but the district is making at least some efforts to get the local teenagers ready for an arts-oriented high school. At troubled, low-achieving Berendo Middle School, about 40 percent of whose students live close enough to attend High School #9, every student has been electives in dance, drama, music, art and digital art.

In addition, the Los Angeles County Art Museum provides $1 million a year to schools, libraries and communities in and around downtown. And “teaching artists” provided by LACMA have been showing public school teachers how to talk to students about art before art-oriented field trips. LACMA has also installed a gallery at nearby Charles White Elementary School showcasing community artists and the museum’s collection.

It’s all very new for this part of town, where numerous gangs operate and the gentrified enclaves of Chinatown and Echo Park are greatly outmatched by heavily overcrowded and poor neighborhoods.

Wendy Bernstein, a former drama teacher, tears up recalling a Saturday evening in July, when 90 students and their parents boarded buses at Berendo school for a short trip to Walt Disney Concert Hall a few miles away. Few Berendo students enjoy the backgrounds typical of more economically advantaged kids. They’re not heading to an arts magnet school in the fall after, say, a summer’s worth of opera lessons. Even so, many Berendo students say they’d like the chance. “I like to draw,” says Jesus Contreras, an eighth grader. “I would like to try sculpture. I’d like to learn how to make the hands, the shape of a body.”

Charter-schools expert Young points out, “When you look at the gospel choir talent, visual arts talent [and] we’ve got one of the most vibrant Chicano art scenes in the country — these talents are not exclusive to kids who have been raised with a conservatory education.”

But former LAUSD school board member David Tokofsky, who participated in key reforms in reading, math and academics that have dramatically improved test scores in the city’s worst grade schools, predicts that the highly visible High School #9 experiment will be short-lived.

“The defining of what ‘community’ means is treacherous,” Tokofsky says. He believes that under Superintendent David Brewer, district officials will quietly turn it into another magnet school that shuts out local kids and uses highly selective screenings. “I don’t know why you’d build a state-of-the-art school for the arts and only let ‘beginning strings’ in,” he says of what he sees as an ill-fated idea.

When they were swept into power in the hard-fought mid-2007 elections, Mayor Antonio Villaraigosa’s hand-picked allies on the LAUSD school board promised to fix the high schools. But so far, state test scores and dropout statistics show that the Villaraigosa-dominated school board has made no progress. No LAUSD official has yet explained to taxpayers how the district plans to run a successful arts-oriented high school amid all its other challenges — and failures.

Even with millions of dollars in public and private funds financing High School #9, it is about how the kids will be educated. Says education professor Darling Hammond, “a very carefully planned curriculum that gets kids involved in highly motivating and engaging reading, extensive writing [that] may even integrate arts in the process has a very strong, positive effect on achievement gain. I think that’s what they’re really aiming for. And is there a danger that they won’t succeed? Well certainly there is.”