Mayor Villaraigosa has high hopes for his schools

He vows to double the rate of academic improvement at the 10 campuses within the Partnership for Los Angeles Schools, his effort to see success at some of the city's poorest-performing facilities.


September 3, 2008 -- Los Angeles Mayor Antonio Villaraigosa vowed to double the rate of academic improvement at schools under his stewardship in benchmarks announced Tuesday.

The marching orders apply to the 10 schools that make up the Partnership for Los Angeles Schools, Villaraigosa's high-stakes effort to improve some of the city's lowest-achieving campuses. The partnership assumed leadership of the schools July 1.

Villaraigosa unveiled his goals before 300 teachers, administrators, parents and students gathered in the auditorium of Markham Middle School in Watts.

"Judge me by what we do in these schools," the mayor said. "We're giving specific, specific goals for every year."

In the past, Villaraigosa repeatedly slammed the school district for moving too slowly to improve schools. The targets he set Tuesday would outpace the annual gains made by most California schools, but he did not promise the rapid pace of change he had suggested was possible in the past.

On the state's Academic Performance Index, Villaraigosa called for each partnership school to improve its overall score this year by about 30 points, or about twice the rate of improvement at these campuses in recent years -- although Markham's score actually declined last year.

The state target for Markham this year is a 14-point rise. (State goals apply not only to an entire school but also to each group of students there, including English learners and the disabled.)

The mayor also said the number of students at his schools who score "proficient" or "advanced" on the state tests should increase by five percentage points this year in English and four percentage points in math.

Such gains would typically be hailed in the Los Angeles Unified School District, where scores have inched up more slowly.

"I applaud the mayor for coming out and establishing a very respectful set of goals and standards," said Omar Del Cueto, executive director of the district's iDesign Schools Division, which oversees the partnership's five-year contract.

But even at the mayor's pace, Markham would not hit the state's target academic performance score of 800 for 10 years, well beyond the federal government's current deadlines for sweeping school improvement.

One iDesign school, with different outside partners, is ahead of the mayor: West Adams Preparatory High School has pledged to hit the state's target score in five years.

If the mayor's schools don't meet their goals, the district could dissolve the agreement. The partnership, in turn, working with L.A. Unified, could remove underperforming principals.

And most incumbent principals didn't wait around; new principals have started at seven of the eight schools that open today. (Two year-round schools began July 1.)

The new principals have been on the job only since Aug. 18, making for a particularly challenging start to the school year at Markham, where 26 of 89 teachers also are new, most with one to four years of experience.

Markham, in particular, is coming off an especially difficult year. In spring, Assistant Principal Steve Thomas Rooney was arrested on suspicion of molesting two students.

On Tuesday, Villaraigosa spoke of $3 million secured for his schools from the re-assignment of funds.

And Villaraigosa's team has landed much more than $50 million in long-term commitments.

"Some of this is going to take money," Villaraigosa said. "And we've got to find it. And that's going to be my job."

September 3, 2008 -- WATTS - As students return to classrooms today for the start of a new school year in Los Angeles, major changes will greet 10 of the worst-performing campuses now under the authority of Mayor Antonio Villaraigosa. 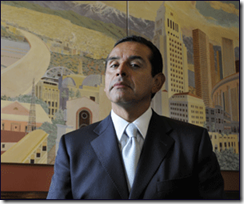 During a visit Tuesday to one of the schools, Villaraigosa laid out ambitious goals for the coming year to reverse a failing system that has resulted in more dropouts than graduates.

"The whole nation is watching to see what we do here," Villaraigosa told a group of about 200 parents and teachers who reported to Markham Middle School on Tuesday to prepare for classes. "A lot of people are looking at the public school system and giving up on it. Not me. I believe in public education. I believe in these students."

Under his Partnership for Los Angeles Schools, Villaraigosa has authority over about 20,000 students at the schools during a five-year pilot program.

He said he wants to see API test scores increase by 30 points and to see improvements in proficiency of 5 percent in English and 4 percent in math on state standardized tests. He also wants to reduce the high school dropout rate to 44percent.

"If we don't make that at the end of the year, then we retool," he said. "We will look at where we failed and see what we have to do to succeed. We cannot be stopped by having lower expectations."

Money is not expected to be an issue at the campuses. Villaraigosa said the schools within the partnership are starting off with $3 million more than they had last school year, and his team has found an additional $2 million within the LAUSD that was not appropriately assigned to the schools.

It will be up to the principals, staffers and parents to account for the money to determine how it is spent, similar to how charter schools operate.

The mayor won control of the schools only after a bruising political battle in which state legislation giving him authority over the entire district was overturned by the courts, and he campaigned to elect a new school board majority that agreed to negotiate with him.

Several teachers at the event said they had voluntarily joined to be part of the mayor's schools.

Suzanna Herrera, a seventh-grade English teacher, said it was the challenge and the freedom offered by the mayor that drew her in.

"I wanted to teach in an urban school," she said. "And I wanted to see if they can really free us of the red tape and bureaucracy and let us teach."

Also, the mayor said the schools will be returning to offering some of the programs that have been lost in recent years. For example, a music teacher has been hired for Markham, the first one in more than 10 years.

"I know these students can succeed and I know there is talent there that we have to cultivate," Villaraigosa said.

At the same time, the hard realities of life in Watts were evident Tuesday.

Several parents told of the fear they have of sending their children to the school nestled between two housing projects, Jordan Downs and Nickerson Gardens.

One mother said her daughter was killed during a robbery at her home, while several others complained of gang members threatening them and their families and of rampant graffiti at government buildings. Villaraigosa promised to look into all the issues, including increased police patrols to protect the students. He also said he hopes to bring an after-school program to middle schools.