BACKGROUND: Scientific Studies and Observed Reality (done correctly, the same thing!) show that adolescents are not morning people. Duh. Scientists with government and foundation grants have proved this obvious fact in recent years and have even proved why: Teenager's Circadian Cycles are still locked up in the bike rack back at school in the AM: their melatonin levels are all gaflooey (excuse the scientific jargon) in the morning.

And gentle readers, so are their test scores.

We obviously don’t care about teens' health and well being - look at the way we let them dress - but (excuse the algebra) Later start times = better student achievement. Often when scary Red Teams take over poor performing school districts the first thing they do is set start times later. And it works!

Of course teachers tend to be morning people - and they set bell schedules per their union contracts.

I am kinda/sorta the left coast correspondent for Fairfax County S.L.E.E.P. They have fought the battle against long odds - eventually getting a sympathetic school board elected. But the Early Bedtime/Status Quo/Change is Inconvenient contingent is up in arms!

If this rant has failed to antagonize anyone I apologize. - smf

As the mother of 17- and 19-year-olds, I have much firsthand experience with sleep-deprived teenagers. In the end, after many hours and much research and discussion, I have changed my mind about the effort to start the high school day later. I have come to believe the massive disruption to teachers, families and the community at large (everything from private gyms and studios to babysitters to adolescents driving during rush hour) does not warrant the extra hour of sleep for teenagers.

The School Board is considering a 2010 change to start times for every school in Fairfax County, with the goal of delaying the opening bell to 8:45 a.m. By 55 percent to 45 percent, the 2007 Transportation Task Force recommended the change, which is endorsed by the Fairfax County Council of PTAs and the organization Start Later for Excellence in Education Proposal (SLEEP). To be well informed, residents should be aware of the following findings from the task force's minority report.

· Later high school start times lead to no statistically significant improvement in academic performance. Who gets higher grades? Students who go to bed earlier, according to a study by Amy R. Wolfson and Mary A. Carskadon.

· A schedule change alone will not solve the problem of tired teenagers. High school students need 2.25 more hours of sleep than they get now. The new schedule would make up about half that deficit.

· A bus schedule change will cost millions at a time when a tight budget has the School Board increasing class size and eliminating academic programs. Cost estimates are not available yet, but the 2006 study estimated cost increases at $9.4 million to $12.2 million.

We've been here before. Fairfax public schools studied this issue in 1991, 1998 and 2006. Each time a study recommended no schedule change.

The 1991 report unanimously rejected a schedule change because of the high cost: The "committee raised numerous concerns about the impact on intermediate and high school activities, child care, safety, special programs, vocational education, and time available for homework and community activities."

The 1998 group rejected the change because of the massive disruption to the entire community: "Like the legendary Gordian Knot, which could not be untied by conventional means, the Task Force was unable to identify a way to change bell schedules that would not require other significant changes."

An independent consultant in 2006 noted the great risks and increased costs: A "shift to later secondary school start times can be accomplished for an incremental cost increase of between 10 and 13 percent of current transportation costs."

Whatever the final decision, these conclusions need to be available. Research from all points of view is available on the task force Web site, http://www.fcps.edu/fts/taskforce07/documents/index.htm. Look before you leap.

I reserved the whole column for your letter because, in my usual ignorance, I was unaware of any significant parental opposition to the later high school start time proposal.

Many of your arguments make sense. I still lean toward the position of SLEEP, which has gotten space in this column and has among its leaders my former Washington Post colleague Sandra Evans.

As a late riser, blessed to work for a morning newspaper where hardly anyone shows up before 10 a.m., I always felt sorry for my kids -- and me, their chauffeur -- when they headed off to high school at dawn. But you have done a great job buttressing the other side of this issue.

A small group of parents, representing all incomes and ethnicities in the system, was invited by the School Board's linkage committee to discuss the proposal in study circles in June. Most high school parents liked the current schedule but said they could support the proposed change. Parents of middle school students, who would start at 9:20 a.m., voiced strong opposition, school spokeswoman Barbara Hunter said.

Every district in this area has talked about the sleep deprivation problem among high school students. I would like to hear from more readers on this. E-mail: extracredit@washpost.com

The Sept. 4 column ["Early Bedtimes Work, Too, for Sleep-Deprived Teens"], from a parent opposed to later high school start times, brought a flood of letters and messages, more than I have received in recent memory on any issue. The vote was 47 for a later opening bell and four opposed. 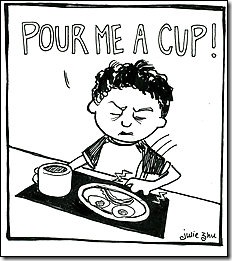 I begin with a response from the organization promoting the change in Fairfax County, and then a sampling of other views today and in future columns.

Changing Fairfax County high school start times is critical to the mental, physical and academic health of teenagers. With the current start times, the vast majority of teenagers are not getting enough sleep on school nights. Students, families and the community are suffering for it. Kids sleep in class, load up on caffeine and drive drowsy, get sick more often and miss more school. Teenagers most get in trouble during the long, unsupervised afternoons.

Our organization, SLEEP, has been advocating for reasonable bell schedules for all students K-12 for more than four years, and Fairfax schools are close to finding a way to fix this longtime problem.

Change is difficult, but it is worthwhile and achievable. With later start times, students sleep more. This is a fact, established in jurisdictions that have made the change.

The School Board's most recent Transportation Task Force agreed overwhelmingly that its recommended bell schedule would be a major improvement to our students, families and community. Although the details need to be refined, we are moving forward. Fairfax school staff members have done a great job in producing a first cut. We are confident that a few more changes can make this a money-saver and have reasonable start times for all students.

Contrary to myth, the seemingly simple get to bed earlier approach doesn't work. Sleep researchers across the world agree that teenagers' biorhythms are different, and on a later cycle, than that of adults and younger children. That makes it difficult or impossible for the average teenager to fall asleep in time to get a full night's rest before waking at 6:30 a.m. or before. (In Fairfax, some must wake before 5 a.m. to catch the bus.)

More sleep leads to improved physical and mental health and safety. Relationships with parents and friends improve. Students have time for breakfast and for extra curricular activities.

Can this be done in Fairfax County? Yes. Fear of disruptions have preceded bell time schedule changes in almost every locality. We're not inventing the wheel. It's been done before and with great success. Bell schedules similar to what have been proposed in Fairfax have been implemented elsewhere with minimal disruption.

Other jurisdictions feared there would be a high cost but found they were able to transport students with the same number of buses and drivers. Some have even saved on delivery time, meaning less time on buses for students.

It's time to set aside excuses for not providing bell schedules that serve the best interests of our students and continue the hard work of developing an implementation plan that will work for Fairfax County.

It can be done. It should be done. Our kids, families and community have waited long enough.

I have a simple solution: Just switch the start times of elementary school children with high school students. Elementary children tend naturally to be early risers and are easier to get to bed early.

Such a schedule change would not cause any disruption in busing. It might even remove the burden many families face with young children in before-school day care because their school day starts so late. High-schoolers are capable of being home when their parents leave for work and of getting themselves to the bus stop.

I am indifferent to a later start time but have no issues with the current time.

I am sure there will be a disruption to the Fairfax County school transportation schedule and to working parents, so a change should be pursued cautiously. High school students are facing adulthood and their work or advanced study life, which might be even more demanding.

I have read the reports of "experts" on the advantage of the later start time and will say only that when my son has to make early morning football practice, he is in bed by 9 p.m. He usually goes to bed early because the coach expects players to be well-rested.

It comes down to discipline and motivation to get well rested. My experience makes me question the experts and whether their testing/reports are slanted.