The news that doesn't fit from Sept 14th

By Patrick Range Mcdonald | From The LA Weekly | Published on

"Throughout May and June, Villaraigosa was said to be gearing up for the July 1 takeover of 10 low-performing schools in the Los Angeles Unified School District through his Partnership for L.A. Schools program.

But in fact the record shows the mayor was busy visiting New York City and Israel between June 9 and June 17, and he was holding 16 fund-raisers that month.

Some analysts say the findings suggest that the efforts of many district and school leaders to align educator professional development with content standards have not consistently translated into the kind of instructional changes that standards-based reforms are intended to inspire.

WHAT HAPPENS TO KIDS AFTER THEY DROP OUT?

by Dan Walters to the Sac Bee Capitol Alert Blog

September 11, 2008 -- There's still a bit of controversy over how many California's public school students drop out without graduating from high school. The latest state estimate is 24 percent, but some critics say the number understates the problem for a variety of reasons, including not counting those who never get to the ninth grade.

While the dropout numbers game continues, the California Dropout Rersearch Project, based at the University of California, Santa Barbara, has developed another view of the dropout problem -- what happens to those who leave high school without diplomas?

Sept 11, 2008 - Gov. Arnold Schwarzenegger's fourth education secretary in five years resigned on Wednesday, saying he was ready to start "a different chapter of my life."

David Long, the former superintendent of schools in Riverside County whom Schwarzenegger touted as having "the most unbelievable experience" last March, lasted 18 months on the job.

· Los Angeles Unified had gains in sophomore English language-learners passing the exit exam , an increase of 5 and 4 percentage points respectively from a year ago.

San Pedro High School saw a 10-point jump in its pass rate for math, along with an English rate that exceeded the state average.

Playing Cowboys & Indians with the Taxpayer's Money: AUTRY SEEKS TO SHIFT COSTS OF SW MUSEUM TO YOU 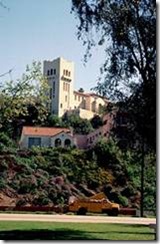 Who should pay to fully rehabilitate the Southwest Museum building? According to Jackie Autry and her Board of Directors: YOU.

Letters to The Times: A LITTLE PUBLICITY FOR MIDDLE SCHOOL + STUDENTS DESERVE BETTER

A little publicity for middle school: The McCain campaign's claim that the picture of Walter Reed Middle School was used as a "way of illustrating the candidate's call for public education reforms" was a shallow attempt at damage control after some inept researcher mistook the school for Walter Reed Army Medical Center. At least that's the story going around.

Nobody on the Republican convention team caught the error -- not even McCain, who should have some idea what the building looks like. They all deserve a large, bold "F" on their collective homework papers.

Students deserve better: The fundamental flaw in No Child Left Behind is that it uses a target model to measure growth. By 2014, almost every school in the nation will "fail." Targets that call for a 100% high school graduation rate will only be met in rare instances. Targets that call for 100% proficiency in subject matter will fare likewise. According to the various standards set by the act, there are some 25 ways that a school can "fail." It makes the whole system something of a joke.

And now: For something completely indifferent: THE BUDGET IMPASSE 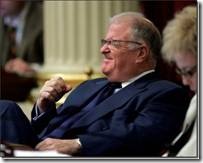 Published Online: September 12, 2008 --The failure of California lawmakers to enact a budget more than two months after it was due has schools operating in what one official called a “very bizarre, unknown place” and contemplating drastic steps to cope with the fiscal crisis.

Without a state budget, districts will have to do without more than $3 billion for programs such as special education, remedial and gifted instructional programs, professional development, and school transportation.

September 12, 2008  --Education leaders held a news conference yesterday to lament California's missing budget, saying the uncertainty of funding and the lack of certain checks being cut is hurting the state's students.

"Education is suffering," said Jack O'Connell, the state's superintendent of public instruction. "Our students are suffering."

The state budget is a record 73 days late. As a result, many bills are going unpaid, most notably for schools' categorical programs.

Neither the Assembly or Senate has session scheduled for today, after Democratic lawmakers in both houses voted down GOP budget proposals earlier this week.

So how far are Democrats from wooing enough GOP votes for their own tax-raising plans?

Well, pretty far, especially if the offensive conservatives have mounted against the California Taxpayers' Association is any indication. The 82-year old group endorsed Gov. Arnold Schwarzenegger's compromise proposal, which is built around a three-year 1-cent sales tax hike, followed by a permanent 1.25-cent cut.

Thirty-one of the 32 Assembly Republicans co-signed a letter blasting the taxpayers' group for "a cynical political calculation" in backing the plan.

The only GOP non-signer? Assemblyman Greg Aghazarian of Stockton, who just so happens to be running for state Senate in a Democratic-leaning district.

There may be no budget yet, but the state's bureaucracy continues to lumber along.

73 Days w/o a Budget: THREE PLANS, NO AGREEMENT

September 11, 2008 - Lawmakers are debating three main plans to resolve the state's overdue budget - one proposed by Gov. Arnold Schwarzenegger in August, one advanced by Democrats from two-house conference committee deliberations, and one from legislative Republicans. So far, none of them has received enough support to reach the needed two-thirds vote for passage. Here's a look at how they differ in key areas.

Assembly Democrats said no to the GOP budget proposal along party lines. Meanwhile, the state's revenues dipped below expectations in August.

After the vote, Gov. Arnold Schwarzenegger met separately with members of both the Assembly Democratic caucus and the Assembly Republican caucus.

Last week, Assembly GOP leader Mike Villines said, "Some of my guys want to meet him for the first time,"

71 days w/o a budget: SENATE DEMOCRATS REJECT GOP PROPOSAL FOR ENDING CALIFORNIA BUDGET IMPASSE - Republican plan would have avoided a sales tax increase through $3.4 billion worth of spending cuts.

The GOP plan failed along party lines, 13 to 21, nine days after the GOP had blocked a Democratic alternative because it increased sales taxes to close a $15.2-billion budget gap.

71 days w/o a budget: THE MADNESS CONTINUES

"This madness has gone on far too long," Gov. Arnold Schwarzenegger said in his Saturday radio address of the budget impasse.

But the spending plan-free fiscal year will continue today.

71 days w/o a budget: A Message from Senator Tom Torlakson (D-7) Antioch/Concord

70 days w/o a budget: ALLOW A MAJORITY BUDGET VOTE - The delay in passing a state fiscal plan is not the fault of Republicans or Democrats but of the state's supermajority rule.

At the very least, California should return to a pre-1962 law that allowed budgets to be passed on a majority vote if spending didn't increase above 5%.