The teachers union said Sunday the strike will happen in January or February if the district refuses to increase salaries.

The union blames low pay for a high turnover rate.

Contract talks between the two sides have been at a standstill. Next month, a state mediator will step in to try to broker a compromise.

The district said this is not a good year for employees to be asking for raises.

In a move to push the District to closure on stalled 2007/2008 contract negotiations, UTLA today has declared impasse in negotiations with LAUSD. After a preliminary meeting with a mediator from the California State Mediation and Conciliation Services, LAUSD has agreed that an impasse exists. The two parties have applied to the Public Employee Relations Board (PERB) for a formal declaration of impasse.

UTLA members deserve better
UTLA has been in “reopener” talks with LAUSD on salary and other issues for over a year. The District continues to offer a 0% salary increase for 2007-2008, even though it received a 4.53% Cost of Living Adjustment (COLA), none of which was passed along to UTLA members. The District is now unilaterally acting to cut salaries by 3.5% with the elimination of professional development and the budgeting of furlough days. LAUSD has also refused to come to an agreement to improve safety or working conditions for teachers and their students.

It’s a matter of priorities The District’s inaction in contract negotiations is troubling on a number of fronts. LAUSD is spending $845 million on outside contractors and wasted $135 million on a deeply flawed payroll system. The LAUSD bureaucracy still functions in full force on a daily basis.

Despite the challenges of the state budget, the issue is not one of fund availability but of priorities. The majority of L.A. County’s other school districts used their cost-of-living adjustment funds to offer employees raises from between 2 and 5 percent. Why won’t LAUSD stand behind their teachers and health and human services professionals?

Next steps By declaring impasse, UTLA and LAUSD will now proceed to mediation, the next step in the negotiation process. UTLA continues to fight against furlough days and to restore the status quo on buyback days. We also continue with health benefits bargaining, along with the seven other unions that represent LAUSD employees. Stay tuned for additional information on the impasse process, if progress occurs. 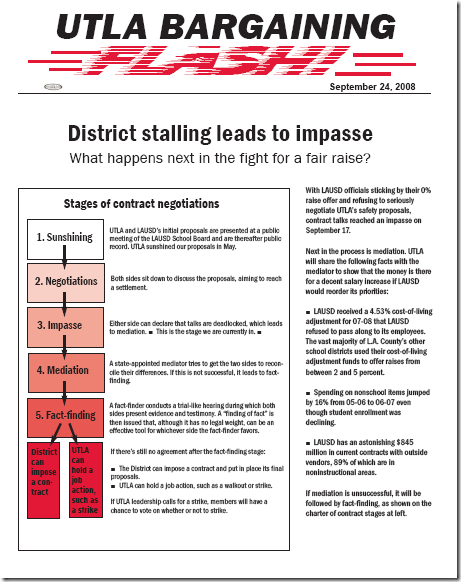