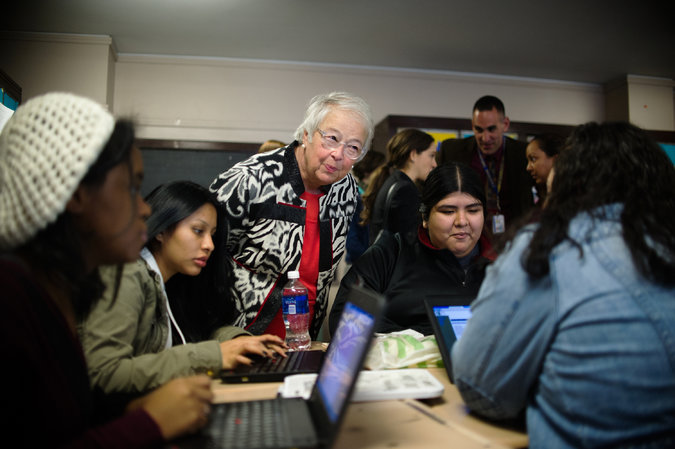 Photo Schools Chancellor Carmen Fariña with students from the High School of Fashion Industries in Manhattan on Monday. Credit Hilary Swift for The New York Times

OCT. 26, 2015  ::  As part of a push to encourage more students to apply to college, New York City will begin offering the SAT free to all public school juniors, Schools Chancellor Carmen Fariña announced on Monday. The test will be given during the school day — not on a Saturday, as is now the common practice.

Education officials said that by removing barriers to entry — like the required fee and the very act of signing up — the hope is that students who might not otherwise have taken the test will do so.

“The opportunity to go to college should never be decided by students’ backgrounds or ZIP codes,” Ms. Fariña said in a statement. “I only became the first person in my family to go to college because a teacher let me know it was an option and supported me through the application and enrollment process so I could follow my dreams of becoming a teacher.”

With this change, which will take effect in the spring of the 2016-17 school year, the city joins several statewide efforts to increase the number of students taking college entrance exams, like the SAT or ACT. States including Kentucky, South Carolina and Wisconsin have students take the ACT to fulfill their high school testing requirements, and in August, Connecticut announced all 11th graders would have to take the SAT. 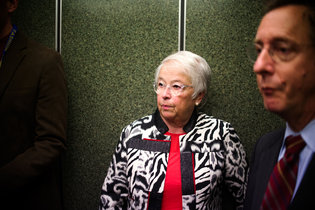 In Connecticut, at least part of the impetus was to reduce the number of tests students take. The SAT replaced an existing exam. Access was less of an issue, because even before the change was made, 83 percent of the state’s high school graduates already took the SAT.

In New York City, only 56 percent of the class of 2015 took the SAT at least once, according to the Education Department.

Ms. Fariña made the announcement as part of College Application Week, a national program that encourages students to apply to college. Nearly 300 city schools are participating this year in events that give students the chance to speak with admissions officers from State University of New York colleges, for example, and provide free online help with college essays.

Daryl Blank, the principal of High School of Fashion Industries in Manhattan, where Ms. Fariña announced the new program, said that for students, taking the test during the regular school day and “in the comforts of where they learn” would make a big difference.

“I think the ‘for free’ part is actually a pretty big deal, also,” Mr. Blank continued. The regular cost of taking the SAT is $54.50, and if the test is “something that’s on a Saturday, that’s considered optional, and you have to pay $54.50, if you’re a teenager, you might decide to spend that $54.50 somewhere else,” he said.

Students will not be required to take the exam, but educators hope the new program will make it a regular part of their educational landscape.

Benjamin L. Castleman, an assistant professor of education and public policy at the University of Virginia who has done research on college access, said that across a variety of programs, like organ donation and retirement plans, participation tends to be much higher when taking part is the default. That same principle, he said, can be applied to college entrance exams.

“By making it universal,” he added of the tests, “you make it something that every student who shows up on that day” is going to take.

City officials pointed on Monday to the success of a similar program for the Preliminary SAT exams. The Education Department began offering that test free during the school day to sophomores and juniors in 2007, and has since seen the number of students who participate almost triple. The city will continue to offer the preliminary exam to sophomores, while offering the SAT to juniors.

The program is expected to cost the city $1.8 million annually.