“THE ASTROTURF IS RESTLESS”: ‘CLASS’ (which was formed to Save John Deasy) demands its say in LAUSD superintendent search

Groups pressure L.A. Unified board to step up search for new superintendent 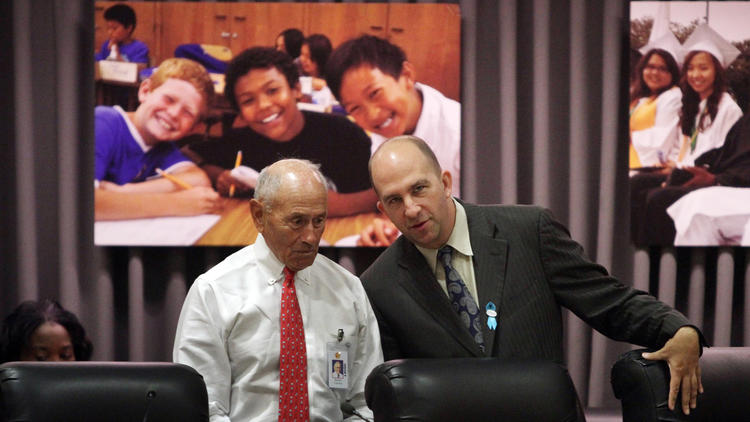 L.A. schools Supt. Ramon C. Cortines, left, and school board President Steve Zimmer confer at a meeting last year. Cortines, 83, would like to hand over the job to a successor by the end of the year. (Bob Chamberlin / Los Angeles Times)

October 6, 6:41 PM  ::  A coalition of Los Angeles groups has stepped up pressure on the Board of Education over how it should choose the next leader of the nation’s second-largest school system.

In a letter to the board released Tuesday, the groups requested that a committee of key civil rights and community leaders interview the top three candidates and provide recommendations to the school board. 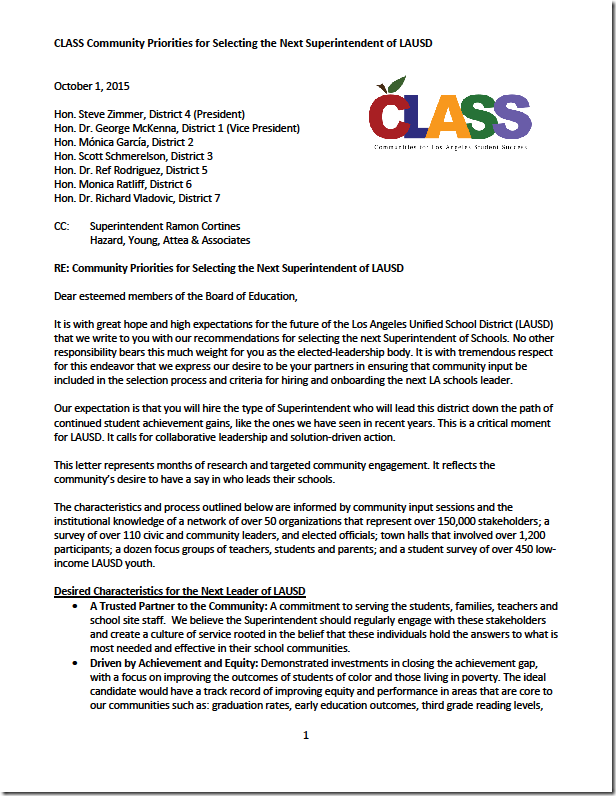 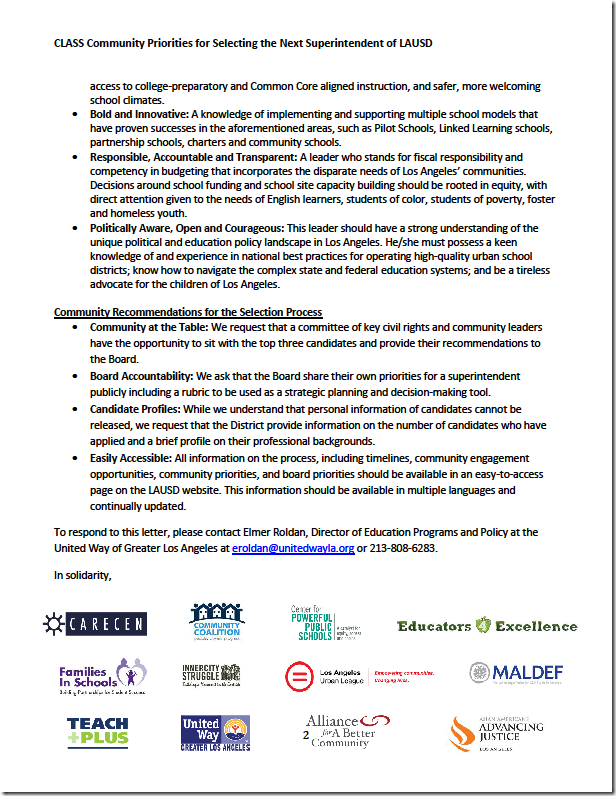 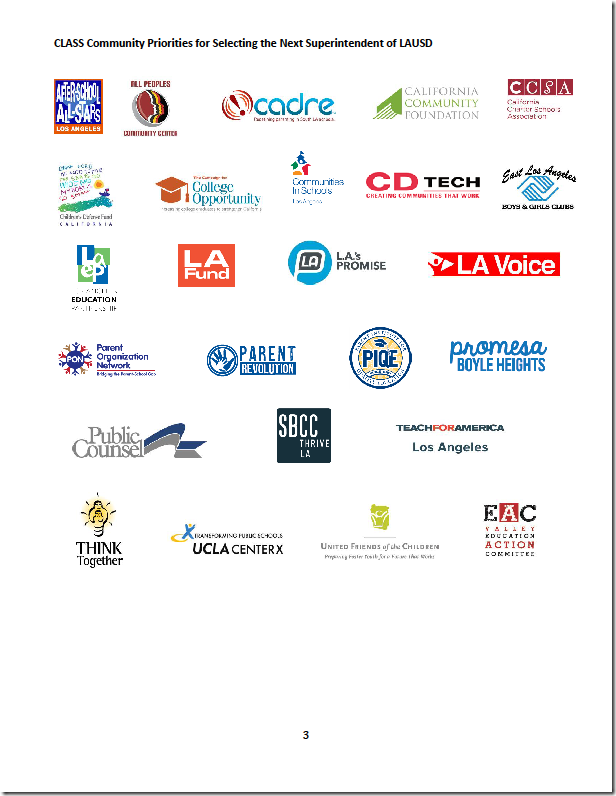 The board is scheduled to meet next week to hammer out details of the search process, including the dates and locations of community meetings to be held over the last two weeks of October. Current Supt. Ramon C. Cortines, 83, said he would like to retire by the end of the year.

The district also set 8 p.m. Tuesday for the launch of a website for the superintendent search. The site includes a survey about the qualities desired in a superintendent, a report from consultants on “What Makes for an Effective Superintendent?” and a still-evolving calendar of events, among other things. The calendar will include public meetings within each of the district’s six geographic regions.

Leaders from some of the groups, in an earlier meeting with board President Steve Zimmer, had pushed for an outside committee to review candidates. One proposal was to have the outside committee control the process, presenting the school board with finalists. Zimmer brought these ideas to the Board of Education in a closed-door meeting, but none won support from a majority of the seven-member body, according to district insiders.

The letter seeks “information on the number of candidates who have applied and a brief profile on their professional backgrounds.” This would allow the coalition -- and others -- to judge how broad a range of candidates was being considered.

The group said its positions were informed by input from more than 50 organizations that represent over 150,000 members as well as from town halls, a focus group with teachers, students and parents, and surveys of more than 110 civic and community leaders and of more than 450 students from low-income families.

The groups want the next superintendent to support a range of options for parents, including charter schools. Charters were not the only type of school they endorsed, but their inclusion of charters comes as the locally based Eli and Edythe Broad Foundation is circulating a plan for a massive charter expansion among foundations and civic leaders.

The Broad Foundation did not sign the letter, although it has provided grants to some organizations that did.

Some of the groups are closely aligned with supporters of former Supt. John Deasy, who resigned under pressure a year ago. He and his allies are associated with a set of aggressive reforms that include limiting traditional job protections for teachers and using student standardized test scores as part of a teacher’s evaluation. Other groups are not associated with pushing for those policies.

In the letter, the groups said the next schools chief should have knowledge about various school models and a history of supporting them. Other types of schools mentioned are those that focus on career training; traditional campuses run by outside groups; and pilot schools, which are managed by L.A. Unified but have some of the freedoms of charters.

Charters are independently managed schools that are exempt from some rules that govern traditional campuses. Most are non-union.

Zimmer said he welcomed the letter.

“I appreciate the input from all stakeholder groups, and I look forward to their formal engagement as part of the community outreach process in the superintendent search,” Zimmer said.

Parts of the letter call for measures that are not controversial. It said the groups seek “a tireless advocate for the children of Los Angeles” and a leader who is “politically aware, open and courageous.”

“The ideal candidate would have a track record of improving equity and performance in areas that are core to our communities such as: graduation rates, early education outcomes, third-grade reading levels, access to college-preparatory ... instruction, and safer, more welcoming school climates,” the letter states. It wouldn’t be a story about LAUSD without a picture of “Dr.” Deasy: Former Los Angeles Unified School District Superintendent John Deasy who stepped down after a controversial tenure. Damian Dovarganes/AP

October 06, 03:38 PM  ::  A group of community organizations sent an open letter Tuesday making recommendations for how the Los Angeles Unified School District should conduct its search for a new superintendent. They're calling for a committee of community leaders to interview top candidates and to make recommendations to the Board before a new superintendent is hired.

"It's critical that LAUSD not make these decisions in a vacuum, without meaningfully incorporating community leaders into that process," the United Way of Greater Los Angeles's president/CEO Elise Buik said in a press release.

The groups, which also include the Los Angeles Urban League, Asian Americans Advancing Justice and others, are asking for the search committee to include community leaders representing students, teachers, business leaders, civil rights leaders, union leadership and higher education experts, among others.

The traits the groups say they're looking for in a new superintendent include a commitment to fairness and the ability to navigate L.A. politics, according to the release. Those characteristics are based on information including a survey of various leaders, a town hall, a student survey and focus groups with teachers, students and parents.

By City News Service from the LA Daily News | http://bit.ly/1Mfvf3r

Posted: 10/06/15, 12:52 PM PDT  : LOS ANGELES — A coalition of community groups sent a letter to members of the Los Angeles Unified School District board today outlining desired characteristics for the district’s next superintendent, and asking that a panel of civil rights and community leaders be allowed to meet with the top three candidates.

“Our expectation is that you will hire the type of superintendent who will lead this district down the path of continued student achievement gains, like the ones we have seen in recent years,” the letter states. “This is a critical moment for LAUSD. It calls for collaborative leadership and solution- driven action.”

Superintendent Ramon Cortines has announced plans to step aside, saying he would like to leave by the end of the year. He was brought in to fill the post after the firing of John Deasy.

The letter calls for the next superintendent to be a “trusted partner to the community,” driven by achievement, and be “responsible, accountable and transparent.”

The groups also asked that “a committee of key civil rights and community leaders have the opportunity to sit with the top three candidates and provide their recommendations to the board.” They also asked for the release of limited background information on the candidates who apply for the position.

“It is critical that the LAUSD not make these decisions in a vacuum, without meaningfully incorporating community leaders into that process,” said Elise Buik, president/CEO of the United Way of Greater Los Angeles. “In addition to the community input sessions and survey that the board is leading, we believe the district must also create a search committee that includes representation from key leaders who have a stake in this decision -- students, teachers, business leaders, civil rights leaders, union leadership, higher education experts, to name a few.”