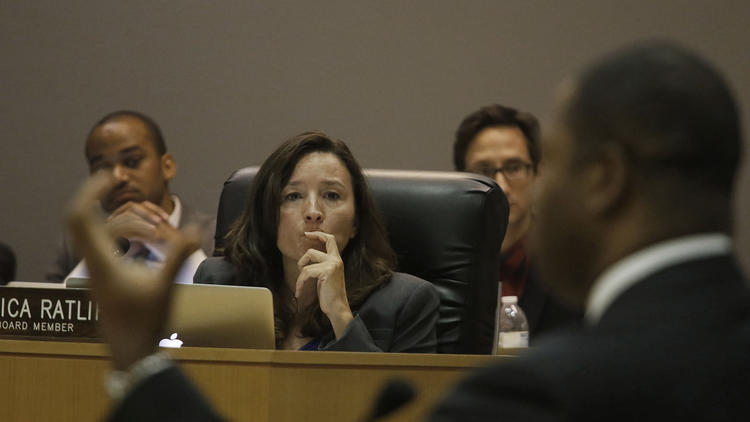 "I think it’s completely inappropriate that we have brought this attorney back to work for the district," said L.A. Unified board member Monica Ratliff, shown at a 2014 meeting.

Oct 14 2015  ::  Two members of the Los Angeles Unified Board of Education expressed concerns Tuesday about the district's decision to rehire an outside attorney it fired last year after he said it was more dangerous for a teen to cross a street in traffic than to have sex with her teacher.

The district confirmed last week that it had rehired W. Keith Wyatt, who argued in court that a 14-year-old girl was partly to blame for her own sexual assault by her math teacher at Edison Middle School in 2010-11.

The teacher, Elkis Hermida, was convicted of lewd behavior with a child and sentenced to three years in prison. The girl has filed a civil suit against the district, claiming negligence.

Board member Monica Ratliff sharply questioned the rehiring Tuesday, telling General Counsel Dave Holmquist that she believed Wyatt was fired for good cause. Then she read a court transcript, quoting Wyatt as saying the girl voluntarily engaged in sex and "why shouldn't she be responsible for that?"

"I think it's completely inappropriate that we have brought this attorney back to work for the district," Ratliff told Holmquist.

Board member Monica Garcia also voiced concerns, saying arguments in court that might make legal sense can be inappropriate in the community. She said the board had had "long conversations about the outrage and the absence of support for the path" the district took in this case.

But board member George McKenna argued that Wyatt had successfully defended the district.

"The attorney did what he felt he should do to represent us and win the case," McKenna said. He added that it might have been more appropriate to settle such cases but that the best course of action was not always as clear-cut as critics claimed.

Wyatt's Los Angeles law firm, Ivy, McNeill & Wyatt, has represented the district for 28 years and done "outstanding legal work," Holmquist told The Times in an interview earlier this month. The district's contract with Wyatt's firm will come before the board next month as members are given an updated list of outside attorneys available for legal work, Holmquist said.

In the Edison case, Wyatt convinced a jury that the district was not liable for Hermida's sexual misconduct because the teacher and the girl concealed it from school officials. When a friend reported the relationship, officials immediately notified police and pulled Hermida from the classroom.

Last month, however, the state Court of Appeal ordered the case retried because it said L.A. Unified improperly argued the girl was partly at fault for her sexual abuse and introduced evidence of her prior sexual history.

Holmquist said the district rehired Wyatt, despite announcements last fall that he would be barred from further work, because he and his firm had "learned from their mistakes." The mistake was speaking to the media without district permission, Holmquist said.

Wyatt had told KPCC that the girl was mature enough to consent to sex.

Ratliff said the district's code of conduct required contractors to conduct themselves in an "ethical and responsible manner that fosters integrity and public confidence."

McKenna said that he did not condone Hermida's actions but that "I don't know that the attorney was unethical."