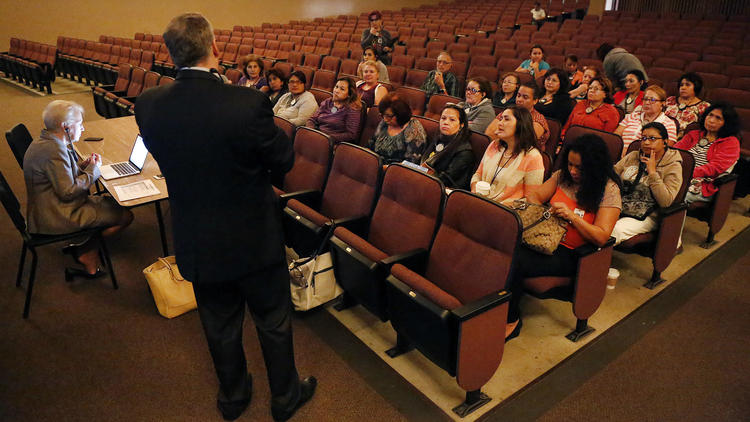 L.A. Unified consultant Hank Gmitro, standing, asks a group of parents, employees and community members what qualities they would like to see in the next schools superintendent.

Oct 27, 2015 | 6AM  ::The Los Angeles Board of Education on Tuesday is expected to consider appointing an outside committee to guide its search for the next superintendent of schools.

A group of civic leaders has pressed the school board repeatedly on the issue.

“I don’t know why you would not want some people around a table giving input,” said Elise Buik, chief executive of United Way of Greater Los Angeles.

L.A. Unified hopes to choose a new leader by the end of the year, when current Supt. Ramon C. Cortines, who is 83, said he would like to step down. Cortines agreed to serve a year ago, when Supt. John Deasy resigned under pressure.

Buik has been among the most consistent voices urging the Board of Education to call on other leaders who could provide perspective and expertise in various areas.

If the district allows a hiring committee to screen for finalists, “my belief is that we’re going to make a better decision,” Buik said. “It will unify the community around a decision. And I think candidates will be encouraged to apply when they see the diversity of people involved in the decision.”

Buik said the hiring process itself could remain confidential — to ensure the best pool of applicants.

She and others, part of the Civic Alliance group, made similar arguments at an Aug. 19 lunch with school board president Steve Zimmer. Then, earlier this month, a separate but overlapping group of local organizations reiterated the request in a letter to the board.

Zimmer did not commit to the idea, but brought it before his colleagues in an earlier closed session, during which the board decided against an outside committee.

Several board members have noted in public that one of their fundamental duties as elected officials is to choose a superintendent -- and that they intend to handle the process themselves. Privately, some said they were concerned that an outside committee might try to co-opt the process, leaving board members unable to determine whom they most wanted.

Still, the board will discuss the matter once more in closed session this week, sources confirmed.

An executive search firm, meanwhile, already is accepting applications and recruiting candidates. And the same consulting team also is collecting public input through a series of community meetings that will conclude this week.

The United Way and other allied groups have not yet met with the consultants, Buik said.

District officials said they encourage all groups to submit input through the public process or in private meetings. The consultants expect to submit a report on community feedback by Nov. 10.

Other groups have different ideas on the search process. The teachers union, for example, has called for making the identity of the finalists public.

Board member Monica Ratliff supports that idea, even though some candidates might prefer to apply confidentially.

“It should not be a secret that one wants to try to help hundreds of thousands of students achieve their potential,” Ratliff said in an interview. “I would also prefer a superintendent that can face the idea of disappointment and rejection. This is no job for the meek. The job comes with tremendous scrutiny and controversy, but it is an amazing opportunity to change the world for the better. The person who takes the job will lead tens of thousands of employees and impact the lives of hundreds of thousands of students. They will need to have many qualities -- including courage.”

The board voted against revealing the finalists by a tally of 4 to 3.