2 from The Times: WHO MIGHT HEAD L.A, UNIFIED, AND WHAT ARE OFFICIALS LOOKING FOR IN A LEADER? 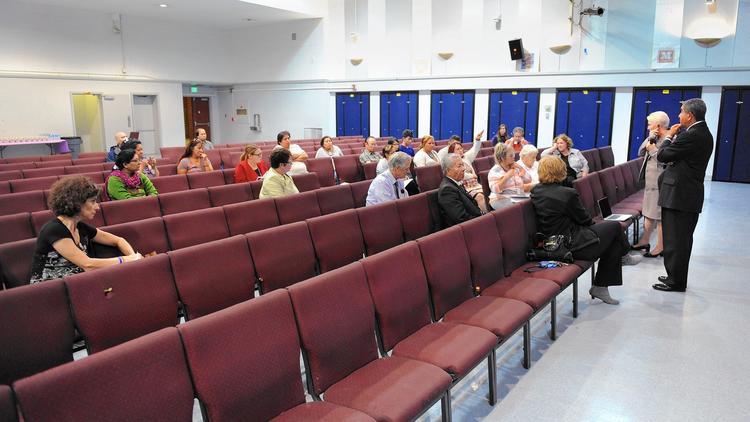 Parents and teachers attend a community meeting this week to weigh in on the qualities they want to see in the next L.A. Unified superintendent. (Wally Skalij / Los Angeles Times)

23 October 2015  ::  In its search for a new superintendent, the Los Angeles Board of Education is out to find that rare leader who can tame political turmoil, manage a multibillion-dollar organization and somehow drive academic achievement upward.

But what type of person would that be? And who would want a job that presents almost insurmountable challenges?

If the board is seeking an educator with big-city experience, they are likely to look at the school chiefs in Miami, Alberto Carvalho, and in San Francisco, Richard Carranza. Both have generally strong track records and also are regarded as leaders among other superintendents.

If they are looking for an insider, Michelle King, the No. 2 person in L.A. Unified, would seem a viable option.

Within Southern California, the sizable Long Beach school district has racked up accolades compared with its larger neighbor to the north — so that could be a place to look even though its leader, Christopher Steinhauser, has shunned entreaties in the past.

Then there are the those who promote aggressive change — inside or outside traditional public schools. John King, who was selected recently to become the acting U.S. secretary of education, had been seen as a possible L.A. Unified leader for the way he pushed controversial reforms through the state of New York.

The board has hired a search firm to find candidates to replace current Supt. Ramon C. Cortines, 83, who came out of retirement a year ago when former Supt. John Deasy resigned under pressure. Cortines has said he would like to leave by the end of the year.

Los Angeles Unified, the nation's second-largest school system, is widely viewed as a management minefield. The district leader reports to seven elected board members, with differing politics and priorities. The superintendent runs a $12.6-billion entity, develops and carries out policies, and negotiates contracts with employee unions — all the while confronting lagging academic achievement and declining enrollment.

“I'm worried that no one smart enough to do the job would be crazy enough to take it.” - Virgil Roberts

"I'm worried that no one smart enough to do the job would be crazy enough to take it," said attorney Virgil Roberts, a veteran of the battles over education in Los Angeles. "A true visionary could find an easier path to getting things done and making a difference elsewhere. And few educators, even if they are willing, have the necessary political skills."

L.A. Unified has hired unconventional superintendents in the recent past. Former Colorado Gov. Roy Romer had little education experience but won high marks for his political skills and marshaling the district's massive school building program. Navy admiral David Brewer had a mixed record, with some saying he couldn't manage the politics inside or outside the school system.

It isn't clear which of the people whose names are being circulated would want the job. Recruiting is going on behind closed doors in an attempt to yield the best pool of candidates. At last week's school board meeting, board member Monica Ratliff proposed making the finalists public, but her effort failed.

Several qualities could give a candidate an advantage. It may help to belong to an ethnic minority — reflecting the district's majority Latino student enrollment, for example. The district is 74% Latino, 10% white, 8% black and 4% Asian.

A woman also could have an advantage, given that a woman has not led L.A.'s schools since 1929.

Experience in an urban district would help, especially if students in that system have performed well or at least made strong gains.

Political skills are a must, given that competing factions are clashing over the direction of the district. Deasy maintained support from local philanthropists and civic leaders, but lost the trust of the school board and the goodwill of many teachers and other employees. Simmering antipathy toward Deasy still was evident among district staff who took part this week in public forums that were held to collect input about the qualities desired in the next leader.

The search comes at a pivotal moment for the district. A plan spearheaded by philanthropist Eli Broad would move half of district students into independently run charter schools over the next eight years. The teachers union and other critics are opposed, saying it would devastate the district's other schools.

"I really hope … that we find a common-ground candidate," said Elise Buik, chief executive of the United Way of Greater Los Angeles, who has been at odds with the teachers union over some issues.

Buik remains a fan of Deasy, who pressed for an agenda that included using student test scores as a factor in evaluating teachers and limiting traditional teacher job protections.

In Long Beach, Steinhauser has avoided alienating either teachers or civic leaders. Another possibility would be his predecessor Carl A. Cohn, who recently took a job as executive director of California Collaborative for Educational Excellence, which assists school districts in meeting academic achievement targets. Another veteran administrator, Randolph E. Ward, who once was part of the Long Beach senior leadership team, could be a viable candidate as well. He now heads the San Diego County Office of Education.

School board members are not discussing specific candidates in public, but, by and large, they appear to be leaning toward an educator. Board members want someone who will push for getting more resources to schools — through better use of district funding and from improved coordination with outside agencies.

Overall, they'd also like to see a leader who will stay awhile — perhaps five years, and who could push hard for academic improvement without fomenting discord among teachers and others. The position is expected to pay upward of $300,000.

The teachers union has called for a leader with a history of collaborating with parents, the community and school employees.

The union also would be against any candidate ideologically allied with Broad and Deasy, or who touts running school districts like businesses, said Alex Caputo-Pearl, president of United Teachers Los Angeles.

There's also discussion about whether a current district employee would be well-suited for the job.

An insider would bring knowledge of the system, but might lack broader perspective or be hamstrung by long-standing friendships.

"I wouldn't rule out an external candidate," said Ama Nyamekye, executive director of Educators 4 Excellence, a foundation-funded group that was supportive of Deasy. "There is some benefit, however, from having local folks who are not too wedded to how things work, but bring an understanding of the local landscape and an open mind to innovation."

King of L.A. Unified earned positive reviews working her way up through the ranks and served Cortines and Deasy. But she's never been in charge of managing district policy or confronting its roiling politics.

Other whose names get mentioned include several top regional administrators within L.A. Unified: Roberto Martinez, Christopher Downing and Frances Gipson.

Jim Morris, superintendent in Fremont Unified, would be among former L.A. Unified officials with a shot if he expressed interest.

The Los Angeles Area Chamber of Commerce said it would like to see someone who, like Cortines, could manage competing factions. The chamber also wants someone who would continue Cortines' efforts to move more authority to individual schools.

The current search — like past ones — also is expected to yield some nontraditional options. In the past, the district had tried to recruit former federal Housing and Urban Development Secretary Henry Cisneros and retired Gen. Wesley Clark. In this round, federal Housing and Urban Development Secretary Julian Castro, the former mayor of San Antonio, appeals to many.

There also was recent talk among some civic leaders about Arne Duncan, when he announced his pending resignation as U.S. secretary of Education. But Duncan has indicated he plans to return to his home in Chicago.

Those with nontraditional backgrounds should be considered, said Maria Brenes, the executive director of InnerCity Struggle, a nonprofit that works with students east of downtown.

"I think the board should be pushed to think outside the box," Brenes said. "There has been some progress but much more needs to be made."