RE: PARENTS ARE ANGRY NO ONE TOLD THEM WHAT HAPPENED TO TEACHER RAFE ESQUITH + smf’s 2¢
By Sonali Kohli | LA Times | http://lat.ms/1Lpk1VQ  (published by 4LAKids 18 Oct) http://bit.ly/1W3Cqlq

“A few weeks later, Brenda came home and told her mother that students were being pulled out of class and interrogated about Esquith’s actions” makes what little hair I have stand on end.


“Interrogated” may be too-loaded a word – but my expectation, as an unrepentant middle-class white parent, would be that when investigators of any stripe question my child I will be informed in a timely manner. As in: Immediately …if not sooner.

And I do recall that that was the policy the Board of Education created after the Paul Chapel case at Telfair Elementary in Pacoima in 2011-12. :: NBC News 3/29/2012: “LAUSD Mandates Parents be Alerted of Teacher Abuse Allegations Within 72 Hours” | http://bit.ly/1LT4GfG

smf: I realize that press releases are not policy bulletins and that law enforcement has a limited right to a secure investigation, but that does not trump parents’ rights to be informed in a timely manner! 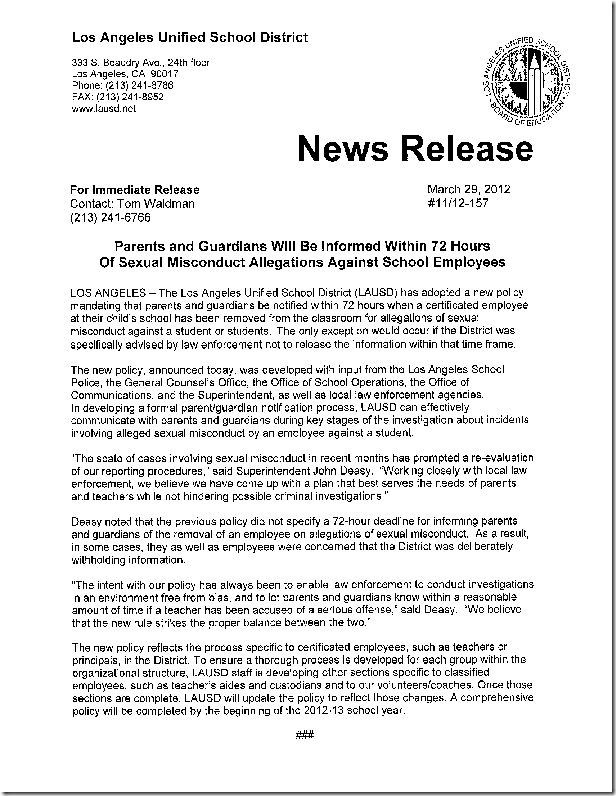