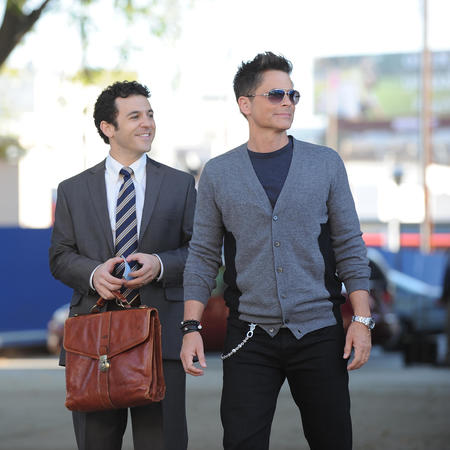 Fred Savage and Rob Lowe avoided being expelled from Marshall High when the school district allowed filming of their new show, "The Grinder," to continue.  (Ray Mickshaw / TNS)

At the same time, the district will continue a review of existing practices and update, as needed, district procedures for handling film requests “to better ensure that the use of our schools is appropriate,” L.A. schools Supt. Ramon C. Cortines said in a statement.

The district’s reversal came a day after Cortines had suspended filming, following reports by NBC-TV Channel 4 that film shoots had disrupted classrooms and damaged school property.

One campus shoot, at Hamilton High, was for a pornographic film, the station reported.

Cortines quickly ordered a halt to commercial film projects and asked the district’s inspector general to look into how the nation’s second-largest school system handled them.

But Cortines and others changed tack after deciding it would be unfair to disrupt film projects in progress, especially because they seemed to comply with district guidelines.

“I understand the importance of filming in Los Angeles and the benefits it provides to our schools and the local economy,” Cortines said in his latest comments on the matter.

The incident at Hamilton occurred four years ago, officials said, when the district was misled about what the film company wanted to do.

“Filming permits and district records show producers of the 2012 release 'Revenge of the Petites' paid cash to film on Hamilton’s campus on two consecutive Saturdays in October 2011," according to the NBC4 website. "The crew also filmed a carwash scene that included public nudity in the school’s front parking lot."

A parent complained at the time, according to NBC4.

The district responded by issuing a cease-and-desist letter to the production company, banning it from district property and demanding that any scenes filmed on school property be deleted, district officials said.

A spokeswoman said Friday that she did not know if the producers complied with the final condition.

“I have not seen that film,” said Shannon Haber, the spokeswoman.

One is a TV show, “The Grinder,” about an actor who formerly played an attorney returning home to the family’s law firm. Crews were using the Marshall High auditorium on Thursday and Friday. Marshall, with its classic exterior, has appeared often on the screen, including in the 1984 movie “A Nightmare on Elm Street.”

The auditorium at Irving Middle School was being used, Wednesday through Friday, for an upcoming Netflix comedy, “Lady Dynamite.”

Another company is using parking at Westminster Elementary. Similarly, crews are using the parking lot at Reed Middle School over the weekend as their base camp for parking, trailers and catering.

And, on Sunday, a USC student is filming for a thesis at Eagle Rock High.

“Based on the information presented to me, I am satisfied that the use of our schools is appropriate at this time,” Cortines said. The district will carefully review new requests on a case-by-case basis, officials said.

While the NBC4 story alleged that film crews may have caused thousands of dollars of damage, the district collected $10 million in filming fees over the last five years, according to district figures.

The station also reported that filming has created parking shortages and classroom disruptions.

“It is important that this district has the appropriate measures in place to protect not only its students, but its schools and property,” Cortines said. But he added: “It is also important that our actions do not significantly impact the greater Los Angeles area, including reducing job opportunities for residents, many of whom are part of the extended LAUSD family.” 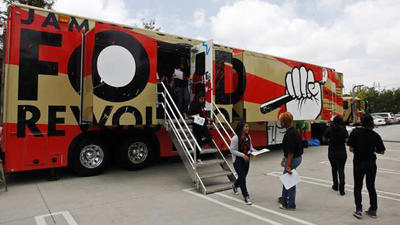 DEJA VU, ALL OVER AGAIN: The Last time Ray Cortines was superintendent he got into a protracted kerfuffle with Jamie Oliver and his TV show “Food Revolution” -  about filming on District campuses.

Oliver’s show was produced by the husband of one of John Deasy’s BBFs;  when Deasy became supe he turned the ban around and embraced Oliver’s message from the couch of Jimmy Kimmel Live …but it was too late to save Jamie’s show.

It was all very sad in a silly way – a portent of sadness+silliness to come.