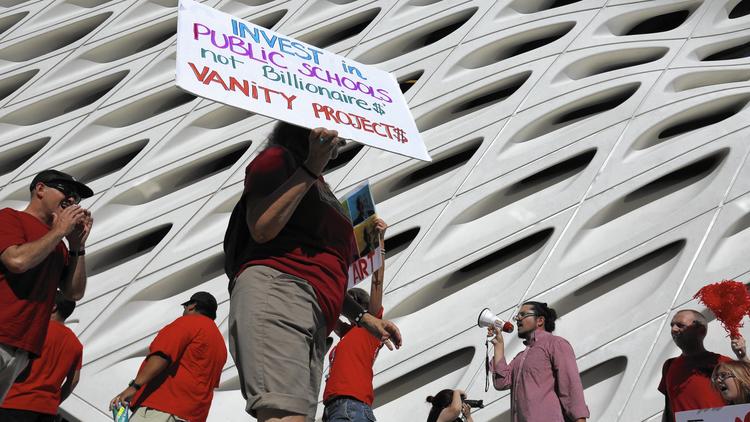 Oct 8, 2015  ::  If a proposal for a massive expansion of charter schools in Los Angeles moves forward, the casualties probably would include thousands of teachers who currently work in the city's traditional public schools.

Under the $490-million plan being spearheaded by the Eli and Edythe Broad Foundation, 260 new charters would be opened in the city in eight years. The goal is to more than double the number of students attending these schools, which are independently run and mostly nonunion.

The Great Public Schools Now proposal makes no mention of recruiting instructors from the ranks of L.A. Unified — even though the foundation acknowledged this week that the charter growth would require about 5,000 instructors.

The plan talks about hiring from an expanded Teach For America and other groups that work with young, inexperienced instructors.

If the plan is carried out, "Los Angeles will have the strongest set of teacher and leader development programs of any city in the state of California," according to the proposal.

The Broad Foundation said this week that teachers are key to the success of the proposal.

"We are in the process of listening to educators and community members to determine how best to support the dramatic growth of high-quality public schools in Los Angeles," spokeswoman Swati Pandey said. "We know that without great teachers, there can be no great public schools. We're eager to engage and support teachers as part of this work."

The fate of teachers is becoming a major political issue in the debate over charter expansion, with L.A.'s teachers union at the forefront of the opposition.

"The charters are specifically looking for educators who have not had the experience of being in a union, which means that, by and large, they're looking for teachers who may find it more challenging to raise their voice about curriculum or school conditions," said Alex Caputo-Pearl, president of United Teachers Los Angeles.

Union leaders said they believe the charter expansion also is designed to dilute its political strength by reducing the number of dues-paying members. Teachers unions and their allies have squared off with Broad and his allies in recent and costly school board elections. Additionally, the union does not support the types of changes and accountability measures favored by Broad and others.

The number of teachers in L.A. Unified has shrunk to about 25,600 over the last six years from about 32,300. About half that decrease stems from the growth of charters, according to the district. Charters enroll more than 100,000 students, about 16% of the total in the nation's second-largest school system.

Charters typically employ younger, less-experienced teachers who remain in the classroom for a shorter period of time, according to research from UC Berkeley and a 2015 analysis from the National Bureau of Economic Research in Cambridge, Mass.

The Broad proposal, which would set aside $43.1 million for a "teacher pipeline," refers to Teach For America as the "strongest human capital partner" for charters in Los Angeles. That group recruits recent college graduates and provides training that consists of six weeks before they start teaching — more in some cases — combined with ongoing support and course work.

The plan also looks to other fast-track programs, the New Teacher Project and the Relay Graduate School of Education, as avenues for hires. The New Teacher Project recruits those who want to change careers as well as recent grads; Relay is an emerging program developed in conjunction with charter leaders. It's based in New York City, with regional campuses in five states, not yet including California.

Younger teachers offer a workforce that charters consider more flexible and one that is willing to work at a pace that may be unsustainable over the long term, some experts said.

"I completely understand why charters go for those kids — they are great, energetic young adults who want to make a difference, who are willing to work 60-hour weeks," said Stephanie Medrano Farland, whose company, Collaborative Solutions for Charter Authorizers, helps school districts oversee and assist charter schools. "There are no limits because they have no union contracts. That also means they burn out."

The California Charter Schools Assn. points to the success and popularity of charters as evidence that their instructors are serving students well. Los Angeles charters, on average, tend to perform higher on state standardized tests than traditional schools.

And supporters applaud the idea of expanding the talent pool, especially given a looming teacher shortage in California as many instructors reach retirement age and the number of applicants to teacher-education programs has dropped.

"On one hand, teachers unions claim we need to replace thousands of teachers over the next decade," said Jim Blew, president of the Sacramento-based advocacy group StudentsFirst, which supports charters as well as vouchers to allow students from low-income families to attend private schools. "On the other, they say there's no room for teachers from organizations with proven, documented records of creating quality teachers.... L.A. needs more great teachers, and everyone should welcome them regardless of who recruited them to the city."

The Broad proposal, which the foundation called a "preliminary discussion draft," specifies a need for 2,413 teachers. But a spokeswoman clarified this week that about twice that number would be needed to staff all the new charters.

Even in choosing among young teachers, charters have distinct hiring preferences. Many rely on nontraditional sources, said Kate Walsh, president of National Council on Teacher Quality, a Washington-based advocacy and research firm.

The issue is partly philosophical, Walsh said. University-based programs focus extensively on the history and theory of learning, whereas charters want more practical training for their recruits, such as how to keep a classroom quiet enough for students to learn effectively, Walsh said.

Some experts insist that there's value in having a range of experience and ages among teachers in a school, to reach students in different ways. Some also stress the value of a faculty with less turnover from year to year.

"If you're tapping teachers who have very little preparation and you have lots of them in schools, without veterans to support or mentor them, the turnover rates are typically high," said Ken Futernick, professor emeritus at Cal State Sacramento, who has studied the role of teacher quality in school reform. "Teachers learn to collaborate in teams over time. And the constant churning of teachers coming and going makes it difficult to create a successful school environment."