2 questions from The Times: WHAT ROLE SHOULD PARENTS TAKE IN THE LAUSD SUPERINTENDENT SEARCH?

Editorial by  The Times Editorial Board | http://lat.ms/1MY9qpj 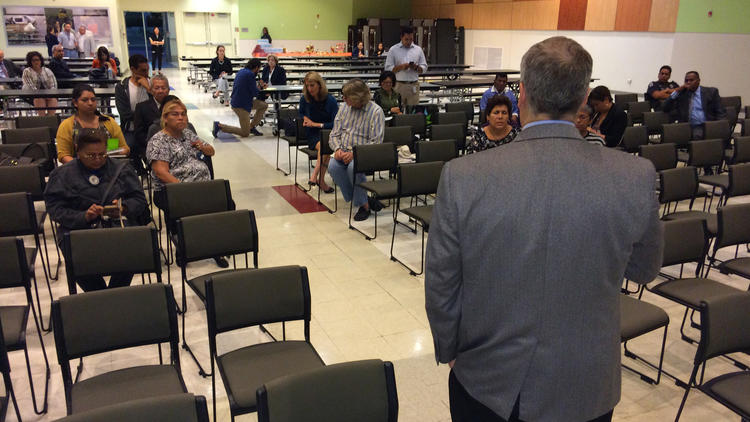 About two dozen people showed up on Monday evening, Oct. 19, to the Roybal Learning Center just west of downtown to talk about what they want in a new L.A. schools chief. (Los Angeles Times)

23 October 2015  ::  Everybody seems to have an idea about how the Los Angeles Unified school board should go about finding a new superintendent. Open up the interviews to the public, some say. Or at least make the identities of the finalists known, or their background and qualifications, so that people can weigh in with their opinions. Most recently, a coalition of local groups, many of them reform-oriented, sent a letter to the board urging it to form a search committee of community leaders to interview candidates and recommend finalists.

So far, the board hasn't been interested. It recently voted against holding a public forum to introduce the finalists. And that's just fine.

This page has frequently criticized the board for micromanaging its superintendents. By the same token, though, the board should not be micromanaged by outside forces as it selects a new chief executive.

Some districts across the country have successfully used independent search committees to hire superintendents, and some have made the finalists' names public. Those are perfectly valid ways to go about it, under the right circumstances. But the board's decision to keep this confidential is equally legitimate and far more common.

In a district as politicized as L.A. Unified, an open search process would be more likely to backfire than to bring about a moment of clasped hands among the various factions. Divisions over the candidates would form between reform and labor leaders. And what if the board ultimately ignored the committee's recommendation? The bad feelings would start even before the new L.A. Unified boss' first day on the job.

Making the identities of the finalists public would be just as problematic. Various people would have different favorites, and the "losers" would seethe with resentment, making it hard for the chosen candidate to succeed in an already very tough job.

The public still gets a chance to say its piece. Unfortunately, the board's first nod to that idea — an online survey — is a weak effort. It's more like a checklist of the attributes of a great superintendent than a smart tool for sussing out what parents want from the schools' next leader.

But now the board is holding multiple public workshops so that anyone — parents, reform advocates, teachers — can have a say. The first meeting, held this week, drew a small audience, and that's disappointing. If the public wants to influence the hiring process, these community meetings are the right forum for making their views known.

Love charter schools? Hate them? Want more tests in school? Fewer? This is the chance to show up and speak up. And then let the board do its job.