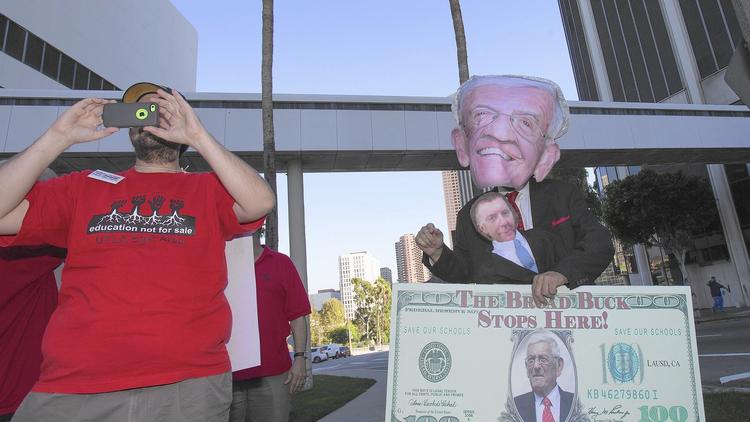 14 Oct 2015  ::  The union representing Los Angeles teachers has pulled together a coalition of other employee unions to oppose a controversial plan to more than double the number of local students attending charter schools.

The linking of the unions is a potentially significant step in the showdown over charter expansion, which, if successful, would alter the education landscape in the city.

The proposed $490-million effort, spearheaded by the Eli and Edythe Broad Foundation, would enroll half of L.A. Unified students in charter schools over the next eight years.

The plan has allies among a group of civic leaders as well as philanthropists and foundations, including the Walton Family Foundation, which has long supported the growth of charters across the nation.

Opponents said the alignment of the other district unions with the teachers provides a significant political boost.

"This was an important moment because the representatives of all employees, many of whom are parents of students in our schools, are all coming forward to say we should invest in our existing schools," said Alex Caputo-Pearl, president of United Teachers Los Angeles.

"We are committed to ensuring that families have more high-quality choices in public education," said Myrna Castrejon, acting chief executive for the California Charter Schools Assn. "It is astonishing to us that anyone would be standing in the way of those parents' efforts to get the best educational opportunity for their children."

Charters are independently operated and exempt from some rules that govern traditional campuses. Most are non-union. L.A. Unified already has more than 100,000 students in charters, the most in the nation.

Joining the teachers union on Tuesday, in a presentation to the Board of Education, was Rusty Hicks, leader of the Los Angeles County Federation of Labor. Also joining in were the other seven district employee unions, including those representing administrators, other managers, police officers, clerical workers and other non-teaching campus employees.

The Broad plan "would devastate our public schools and lead to the closure of our local neighborhood schools," hurting students in the process, said Max Arias, executive director of Local 99 of the Service Employees International Union.

The addition of Local 99 is especially valuable for charter opponents. The union's leaders have resisted criticizing charters. Its members are generally lower-wage earners, such as cafeteria workers, many of whom live in low-income L.A. neighborhoods with both charters and traditional schools. High-performing charter schools are viewed as a benefit by union families who enroll their children in them.

Charter allies, including former Supt. John Deasy, had neutralized Local 99 by supporting its successful effort to win a $15 minimum wage in the nation's second-largest school system.

But non-teaching employees who work at charters usually lack union job protections and are not covered by the $15 wage. And charters frequently rely on volunteers to perform roles that employees fill at district schools.

Both opponents and backers of the charter expansion are vying for public support and political leverage.

Outside the board meeting, about 200 teachers rallied against the Broad proposal. One demonstrator wore an oversized Eli Broad mask and carried a doll in the likeness of Deasy, who resigned a year ago. Deasy has since gone to work at a nonprofit funded by Broad.

"Billionaires can't teach our kids," teachers chanted as they marched.

Speakers also targeted the connection with money from the family that started Wal-Mart — the Walton Family Foundation is funded with proceeds from the corporate giant.

District officials could prove to have limited control over charter growth. Under state law, charters that submit a valid petition must be allowed to open — and to compete with district-operated schools for students.

The school board approved one charter Tuesday and held public hearings for three pending petitions. The board also approved plans for two charters to reorganize as charter management organizations — a possible step toward opening additional schools.

In addition, the board approved the renewal of eight existing charters.

In all, more than 200 charter advocates descended on the board meeting to argue for the approval or renewal of their schools in what has become a regular ritual when the fate of charters is on the agenda.

"The type of academic support our children are getting is awesome," said Nina Trujillo, who has a fifth-grader at one KIPP charter school and a second-grader at another. She spoke at a hearing for a new KIPP school. "They cater to our children for what they need."