Not that there’s anything wrong with that. Guggenheim’s cause, the plight of children trapped in failing schools with lousy, union-protected teachers, is important enough to make his overzealousness forgivable. And his prescription — more accountability for teachers and bureaucrats, and more choices for parents and kids — deserves all the support his film promises to win for it.

But if propaganda has its virtues, it also has its limits. Guggenheim’s movie, which follows five families through the brutal charter school lotteries that determine whether their kids will escape from public “dropout factories,” stirs an entirely justified outrage at the system’s unfairnesses and cruelties. This outrage needs to be supplemented, though, with a dose of realism about what education reformers can reasonably hope to accomplish, and what real choice and competition would ultimately involve.

With that in mind, I have a modest proposal: Copies of Frederick Hess’s recent National Affairs essay, “Does School Choice ‘Work’?” should be handed out at every “Waiting for ‘Superman’ ” showing, as a sober-minded complement to Guggenheim’s cinematic call to arms.

An education scholar at the American Enterprise Institute, Hess supports just about every imaginable path to increasing competition in education: charter schools, merit pay for teachers, vouchers, even for-profit academies.

But he also recognizes that partisans of school choice tend to wildly overpromise — implying that their favored policies could swiftly Lake Wobegonize America, and make every school and student above average. (This is a trap, alas, that “Waiting for ‘Superman’” falls into as well.)

Overpromising leads inevitably to disappointment. When it comes to raising test scores, the grail of most reformers, school choice’s record is still ambiguous. For every charter school success story like the Harlem Children’s Zone and the KIPP network — both touted in Guggenheim’s documentary — there’s a charter school where scores are worse than the public school status quo. The same is true for vouchers and merit pay: the jury is still out on whether either policy consistently raises academic performance.

This doesn’t mean that school choice doesn’t work, Hess argues. It just means that the benefits are often more modest and incremental than many reformers want to think. They can be measured in money saved (both charter and private schools usually spend much less per pupil than their public competitors), in improved graduation rates, and in higher parental and student satisfaction. But they don’t always show up in test scores.

This insight leads to Hess’s second argument — that if reformers want to see more than modest academic improvements, they need to set more ambitious goals. The theory of school choice is the theory of the free market: monopoly breeds mediocrity, and more competition should make all the competitors improve. But in practice, even the more ambitious school choice experiments have protected the public school system from the rigors of real competition.

When poor-performing public schools lose students to charters or private-school competitors, Hess points out, there are rarely any consequences. In Milwaukee, for instance, where a high-profile voucher program has been in place since 1990, public school enrollment has dropped as families have taken vouchers and fled the public system. But spending on public schools has gone steadily upward, effectively rewarding bureaucrats for their failure to keep parents and students happy. As Hess writes, “This is choice without consequences — competition as soft political slogan rather than hard economic reality.”

A real marketplace in education, he suggests, probably wouldn’t fund schools directly at all. It would only fund students, tying a school’s budget to the number of children seeking to enroll. If there are 150 applicants for a charter school, they should all bring their funding with them — and take it away from the failing schools they’re trying to escape.

This is a radical idea, guaranteed to meet intense resistance from just about every educational interest group. But Hess makes a compelling case that it needs to be the school choice movement’s long-term goal, if reformers hope to do more than just tinker around the edges of the system.

In the shorter term, meanwhile, he suggests that school choice advocates need to make a case for greater competition that doesn’t depend on test scores alone. Maybe charter schools, merit pay and vouchers won’t instantly turn every American child into a test-acing dynamo. But if they “only” create a more cost-effective system that makes parents and students happier with their schools — well, that would be no small feat, and well worth fighting for.

LETTERS - Our Choice: How to Save the Schools 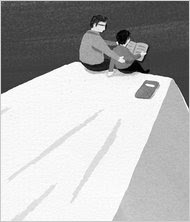 This is not a movie about public education, as Mr. Douthat and other commentators seem to believe. It is a movie about families and children who care about education.

This, in turn, raises the questions that have derailed every school reform plan yet devised: How, exactly, does “school choice” help the girl whose single mother is too caught up in alcohol and drugs to sign up for a lottery? How does giving a voucher to the father who sexually abuses his young son make a difference in that child’s life?

A Times article last spring said that, according to a 2008 report from the Center for New York City Affairs at the New School, about 140,000 teenagers “were missing a month or more of classes each year by the time they reached high school.”

If your mother’s or father’s idea of “school choice” is to let you stay home whenever you choose, then grading teachers is not going to be a cure.

The writer is a retired public school teacher.

Choice does not make better schools; parental involvement does.

Public schools all over San Francisco have been turning around because parents cannot afford the $20,000 tuition for private schools and instead are becoming involved in their local public schools.

But even in these success stories, subjects like art, music and physical education are often taught by the regular classroom teacher or “independent contractors” who make weekly visits. Middle-class parents supplement with after-school enrichment, like music lessons, sports teams, art classes and tutoring.

But many of the lowest-performing schools cannot rely on parental involvement. These schools need to provide after-school homework help, art, music, sports and in some cases health services like dental and medical visits. The students need to learn the discipline of doing homework, but also the joy of education through art, music and sports.

We have all heard for many years now, “Read to your children.” But for many children, this simple act never occurs.

I wait patiently for someone to explain this: Why is Ross Douthat (and most of the right wing in this country) so sure that “monopoly breeds mediocrity” and competition is the answer to improving public schools?

The best educational systems in the world, such as those in Finland, Japan and South Korea, are pure public “monopolies.”

The writer is a professor of architecture and history at the University of Massachusetts and a member of the executive committee of the Massachusetts Teachers Association.

Ross Douthat argues that increasing competition in education through a free-market ideology will improve schools. But any teacher who sees money as an incentive to improving the quality of instruction should not be teaching.

Merit pay, charter schools and vouchers are all based on the same mistaken assumption that a free-market ideology will raise academic standards. The motivation behind good teaching is intrinsic. It is a profession that does not readily lend itself to market forces.

The real problem with the academic reform dialogue is that too few teachers are included.

The writer is a high school teacher.

The question of how to shape school structure is a political and sadly circular debate that allows children to get lost.

Every ineffective school is a problem, and within every successful school we can seek solutions that can be replicated. The issue should not be about “grading school choice,” but about making certain that we maximize the opportunities for each child.

The writer is a teacher and is on the board of KIPP Philadelphia.