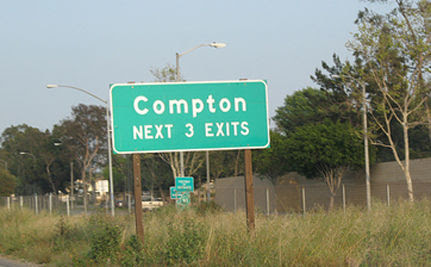 13 October 2010 - School superintendents are hot news! On the same day that D.C. schools chief Michelle Rhee announced her departure, the Los Angeles Times (story below) has reported that the board of the Compton Unified School District, south of Los Angeles, has voted to fire the district superintendent over her use of district credit cards for personal purchases.

Although the superintendent, Kaye E. Burnside, had been on administrative leave since May, it was not until Tuesday, October 12, that the board voted 4 - 2 to fire her. This decision followed an investigation which found that Burnside had charged about $14,000 in personal expenses to the district credit card, and did not reimburse the district for several thousand dollars' worth of these charges.

The picture remains a little murky, since the exact amount of unreimbursed charges is not clear. In addition, Burnside said in a public statement that she believed she had repaid to the district all her personal charges on the credit card. She added that she had been unaware that it was against district policy to make personal charges to the card, since previous administrators had been doing this for 26 years.

Burnside believes that her firing is politically motivated: "I had the courage to make decisions that moved the district forward. In doing so, I undoubtedly stepped on some toes," she stated.

A few members of the community spoke at Tuesday's meeting in support of Burnside, praising the district's gains in test scores and student achievement under her two-year watch. Yolanda Martinez, a Mexican immigrant and mother of two district students also spoke warmly of Burnside's support for non-English speakers, and cited how the superintendent had reached out to Latino families.

This is yet another episode in the continuing woes of Southern California. Less than a month ago, the mayor and former city manager of Bell, a city just a few miles from Compton, were led away in handcuffs. Along with six other officials, they were charged with taking more than $5.5 million from this working-class suburb with a large Hispanic population.

In that case, the city officials were charged with dozens of counts of illegally paying themselves huge salaries in what District Attorney Steve Cooley called a case of "corruption on steroids."

Kaye E. Burnside's case is not at all on this level, but with Compton and Bell being so geographically close, it's hard not to worry about what's going on in Southern California. 13 October 2010 - D.C. Schools Chancellor Michelle A. Rhee will announce this morning that she is resigning at the end of October, according to The Washington Post. [story follows] This move brings an abrupt end to a contentious tenure that has drawn both national acclaim and intense fury, and which also became a central issue in the recent mayoral primary race.

She is scheduled to announce her departure at a news conference with Mayor Adrian Fenty and presumptive mayor-elect Vincent C. Gray. She will be replaced on an interim basis by Deputy Chancellor Kaya Henderson, a close associate of Rhee's from their days at the New Teacher Project.

What went wrong with Rhee? Most insiders agree that it is above all her abrasive manner that D.C. citizens objected to.  That, coupled with the fact that she closed schools by the dozens, fired over two hundred teachers, and spent over two years negotiating a labor contract that gives principals new control over teacher hiring and firing, all made her extremely unpopular in many circles.

She has also declared publicly that she is "not a career superintendent" and that whatever happens to her, she'll be fine; it's the D.C. schools that she's worried about.

However, in spite of her reformist zeal, recent data from D.C. Public Schools shows that progress has slowed in closing the achievement gap between black and white students. A 2009 report said fewer than 50 percent of high school students graduated within four years from D.C.'s public schools.

Hope For The Future

Hopefully, whoever assumes the chancellor's job next will be more willing to work with teachers and parents, instead of alienating them.

October 13, 2010|8:18 a.m. - The board of the Compton Unified School District has voted to fire the district superintendent over her use of district credit cards for personal purchases.

Kaye E. Burnside had been on administrative leave since late May. The board's 4-2 vote Tuesday night to fire her came after a district-commissioned investigation into her credit card use.

The investigation found Burnside had made about $14,000 in personal charges on the district card and did not reimburse the district for several thousand dollars' worth of those charges.

The exact amount of unreimbursed charges is still unclear.

Burnside said in a public statement before the vote that she believed she had reimbursed the district for all personal use of the card and that she had been unaware that it was against district policy to make personal charges on the cards. Previous administrators had been doing so for 26 years, she said.

In her statement, Burnside threatened legal action against the district, saying that if the board voted to fire her, it would be wrongful termination.

"I had the courage to make decisions that moved the district forward. In doing so, I undoubtedly stepped on some toes," she said. "...The manner in which I have been treated clearly smacks of retaliation and harassment."

School board members declined to comment in detail on the reason for Burnside's firing. Board President Mae Thomas said, apart from the credit card issue, she felt Burnside had brought too many consultants into the district at a time when the district was facing staff layoffs.

"I think the teachers need to have more of a voice in what we do," Thomas said.

The handful of community members who spoke at the meeting backed the ousted superintendent, citing gains in test scores and student achievement in her two-year tenure. Yolanda Lopez, a Mexican immigrant and the parent of two district students, said Burnside took pains to reach out to previously disenfranchised Latino families by providing translated materials and improving the district's programs for students learning English as a second language.

"When the superintendent came, she listened to the parents' complaints -– she opened the door," Lopez said in Spanish.

Former deputy Supt. Karen Frison has been acting as superintendent since Burnside was placed on leave. Thomas said the board has not determined how to move forward with finding a permanent replacement.

October 12, 2010; 8:10 PM ET -- D.C. Schools Chancellor Michelle A. Rhee will announce Wednesday that she is resigning at the end of October, bringing an abrupt end to a tenure that drew national acclaim but also became a central issue in the recent mayoral primary race.

She is scheduled to announce her departure at a news conference with Mayor Adrian Fenty (D) and presumptive mayor-elect Vincent C. Gray (D), said officials close to both Gray and Rhee, who spoke on the condition of anonymity.

She will be replaced on an interim basis by Deputy Chancellor Kaya Henderson, a close associate of Rhee’s stretching back to their days at the New Teacher Project, a teacher recruiting nonprofit Rhee founded and ran before her appointment by Fenty in June 2007. Henderson was a vice president for the group and is scheduled to be at Wednesday’s news conference.

Rhee’s departure has been widely anticipated since the Sept. 14 Democratic mayoral primary loss of Fenty. She campaigned on his behalf and questioned whether Gray had the political will to make the unpopular decisions she believed were necessary to sustain school improvement in the District.

Gray has repeatedly said that he supports an ambitious program of school reform but does not believe that changes depend on a single person. In an interview with the Post last week, he said that if Rhee departed, he would seek to name a replacement who shared many of her values and not a vet­eran who had spent several decades in top school jobs. He specifically ruled out Rhee’s predecessor, Clifford Janey, whose name had circulated widely as a possible replacement for her.

After more than three years in the job, Rhee’s tenure already is the longest of any D.C. chancellor or superintendent of the past two decades. Measures of student performance generally improved during her time in the job but sagged in a round of test results released in August, a month before the primary vote.

Rhee removed most doubts about her future as chancellor the day after Fenty’s defeat, when she told an A-list audience at the premiere of the education documentary “Waiting for Superman” that Fenty’s defeat was “devastating” for the city’s school children.

She quickly sought to re-cast the comment, saying that it was not a criticism of Gray. But the declaration underscored the expectation that her time as chancellor would soon end.

She closed schools by the dozens, fired teachers by the hundreds and spent more than two years negotiating a labor contract that gives principals new control over teacher hiring while establishing a new performance-pay system that ties compensation to growth on student test scores.