October 12, 2010 - A new study finds that many states fall short in the “fairness” of their school funding models, measured not just by the amount of money they provide to education, but also by whether they direct sufficient resources to the poorest schools. 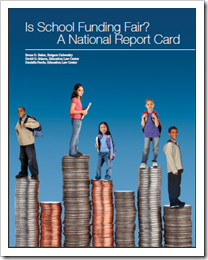 The study, based on a detailed analysis of pre-recession data, was released Tuesday by the Education Law Center, a Newark, N.J.-based organization that advocates for equal opportunities and funding for public school students through research, policy development, and legal action.

About four-fifths of the states evaluated by the authors received a “C” grade or lower on the extent to which they “progressively” fund education—or channel greater resources to poorer, rather than wealthier, districts.

The authors evaluated the states’ performance on four separate categories of funding fairness. Six states scored relatively well on all of them: Connecticut, Iowa, Massachusetts, New Jersey, Vermont, and Wyoming, according to the ELC. Four states generally rated poorly across all or most of the four indicators: Illinois, Louisiana, Missouri, and North Carolina, the authors said.

They also identify broad disparities in the combined amount of state and local funding that students in different states receive, when the authors adjusted revenues to make states comparable to each other, and controlled for factors such as wages and population density.

A study by the Education Law Center examines how well states provide funding to students with the greatest economic needs. 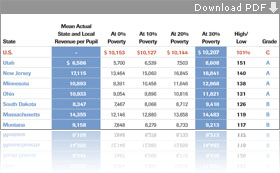 The study, titled “Is School Funding Fair? A National Report Card,” is intended to be the first in a series of reports that examines and tracks the fairness of school funding in the states.

“The picture that this report card paints is one that should raise serious concerns,” said David G. Sciarra, executive director the ELC and one of the report’s authors. “Most states are not doing a very good job of fairly funding their schools.”

The study uses statistical modeling methods, and its data was collected before the recent, severe recession. Future studies will likely show the impact of that economic downturn, and whether state systems grew more progressive or regressive during the ongoing recovery, Mr. Sciarra said.

The ELC report uses district-level U.S. Census data from 2007. More recent Census data has since been released, the authors said; they analyzed it and found that their report’s conclusions changed little.

One measure used to gauge states’ fairness in education funding is funding level, or the average state and local revenue spent per pupil. A second is funding distribution, or the extent to which states provide more or less funding to schools based on poverty. The third is the state’s effort to fund public schools, based on the percentage of the state’s gross domestic product allocated to education.

The fourth measure is “coverage,” or the share of school-age children attending the state’s public schools, as well as the median household incomes of students in private and public schools, respectively. This measure shows what portion of students are being left out of the public school analysis in each state, the authors explain. They also note that it could indicate previous flight from the public school system, and could call into question whether there is political will to support fair funding, if high-income families are choosing private schools.

Grades were only provided for effort and funding distribution, because those were factors states had the greatest ability to change, according to Bruce D. Baker, an associate professor in the graduate school of education at Rutgers University, and Danielle Farrie, the ELC’s research director. Both were co-authors of the report.

Some states were not included in certain measures, such as Hawaii, because it has only one district, which did not allow for cross-district comparisons, and Alaska, where sparse populations across districts and other factors made statistical comparisons difficult, Mr. Baker explained.

Rob Manwaring, a senior policy analyst with Education Sector, a nonpartisan think tank in Washington, said that much of the study’s value was in synthesizing and translating data from different sources, and presenting it in a way that could shape opinion.

“They did a great job of organizing a lot of different measures and putting them into one place,” said Mr. Manwaring, a former K-12 education director for the California Legislative Analyst’s Office. “A lot of this data, policymakers [normally] don’t see it.”

While the study focuses on state funding policy, Mr. Manwaring said it could lead to a closer examination of other inequities, such as how districts distribute resources among their schools, and how federal funding does not always go to the neediest schools. He predicted that the state-by-state evaluations in the report would be heavily scrutinized by policymakers—and surprise those who have long considered their state funding systems to be “progressive” or “regressive”—only to find that ELC’s data produced different findings.

Legislators in a low-scoring state might look at the study, he suggested, and wonder, “How can that be? Isn’t there a state obligation to fix that?