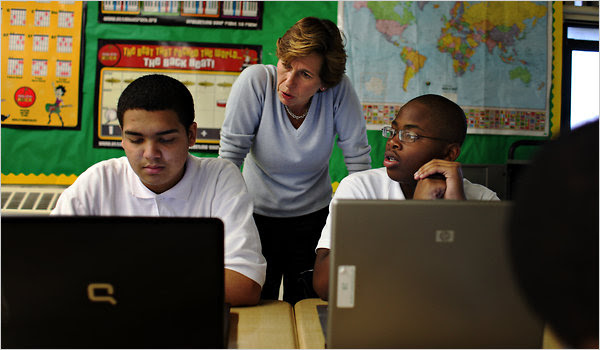 15 October 2010 - In “Waiting for Superman,” the new education documentary, the union leader Randi Weingarten is portrayed, in the words of Variety, as “a foaming satanic beast.”

At a two-day education summit hosted by NBC News recently, the lopsided panels often featured Ms. Weingarten on one side, facing a murderer’s row of charter school founders and urban superintendents. Even Tom Brokaw piled on.

It’s nothing personal, really. Ms. Weingarten happens to be the most visible, powerful leader of unionized teachers, and in that role she personifies what many reformers see as the chief obstacle to lifting dismal schools: unions that protect incompetent teachers.

A combative labor leader who does not shrink from the spotlight, Ms. Weingarten has been fighting back. She issued a written rebuttal to “Waiting for Superman,” and she has publicly debated the film’s director, Davis Guggenheim, arguing that teachers have been made scapegoats. More to the point, the portrait of Ms. Weingarten as a demonic opponent of change — albeit one more likely to appear in a business suit and cashmere V-neck sweater, with a Cartier Tank watch and a red kabbalah string around her wrist — is out of date, according to many education experts.

In the past year, for example, she has led her members — sometimes against internal resistance — to embrace innovations that were once unthinkable. She has acted out of a fear that teachers’ unions could end up on the wrong side of a historic and inevitable wave of change.

“She has shrewdly recognized that teachers’ unions need to be part of the reform,” said Richard D. Kahlenberg, a senior fellow at the Century Foundation, an education research group.

“The earth moved in a really dramatic way,” he said, “to the point that a very successful strategist like Randi has to know that teacher unionism itself is in jeopardy, perhaps even in mortal jeopardy.”

Both friends and foes describe Ms. Weingarten, 52, who became president of the 1.5-million member American Federation of Teachers in 2008 after a decade leading the New York City local, as a superb tactician who cares deeply about being seen as a reformer.

“We have spent a lot of time in the last two years looking at ourselves in a mirror, trying to figure out what we’ve done right and what we’ve done wrong, and we’re trying to reform,” Ms. Weingarten said in an interview.

Early this year, she delivered a major policy speech that embraced tying teachers’ evaluations in part to students’ scores on standardized tests, a formula that teachers — and Ms. Weingarten herself — once resisted.

In the District of Columbia, Ms. Weingarten stepped into a stalemated contract negotiation and agreed to give up certain seniority protections and to enable schools to more easily fire poorly rated teachers.

And in May, she threw her support behind a Colorado law that went further than any in the nation to strip tenure protections from ineffective teachers. “You have to look at that collection of steps and say they deserve applause,” said Timothy Daly, president of the nonprofit New Teacher Project, who has been a frequent critic of teachers’ unions.

Lest anyone think the union is rolling over, it threw money and manpower into defeating the mayoral patron of Michelle A. Rhee, the Washington schools chancellor — and a heroine of “Waiting for Superman” — who resigned this week.

Ms. Weingarten must navigate tricky waters between reformers who demand sweeping changes and rank-and-file union members for whom job security is a major issue. She has met with some opposition within her ranks.

On Thursday, Baltimore teachers voted down a new contract that Ms. Weingarten had endorsed, which would have based pay in large part on how successful teachers are in the classroom rather than on seniority.

And in May, Ms. Weingarten was heckled at her union’s state convention in Michigan by a handful of Detroit teachers, who were angry, in part, that a new contract introduced an evaluation system in which they are rated by their peers. Hard-liners argued that peer review makes teachers complicit in the firing of colleagues.

Ms. Weingarten had played a major role in reaching compromises on seniority and evaluations during the contract’s negotiation. It passed in December but with 36 percent of teachers voting no. Some called the leader of the Detroit Federation of Teachers, Keith Johnson — and by extension, Ms. Weingarten — a sellout.

At the Michigan convention, when Ms. Weingarten was booed, David Hecker, the state union leader, shushed the dissenters. Ms. Weingarten, according to participants, said she wanted to hear them out.

“She was masterful,” Mr. Johnson said. “One by one, she said, ‘That is not true.’ She had the facts to contravene anything they brought forward.”

“We now have our backs up against the wall,” he added. “If we don’t embrace education reform, we will get knocked through the wall.”

In many ways, Ms. Weingarten is fighting to keep her footing in a tilted political landscape. For the first time, a Democratic president, Barack Obama, is espousing ideas that have been anathema to teachers’ unions — chiefly, encouraging school choice through charter schools and holding teachers accountable for student learning.

A $4.3 billion federal grant competition, Race to the Top, enticed many states this year to climb aboard the administration bandwagon, and pulled some unions along, too.

For some reformers — an unusual alliance of moderate Republicans and Democrats — there is still skepticism about the depth of Ms. Weingarten’s commitment.

“The problem is the messages have been very mixed,” Mr. Daly of the New Teacher Project said. “While wonderful steps have been taken, the exact same policies that seem to be supported in one context are opposed in another.”

Some analysts have said that teachers’ support of Mr. Gray was a shot across the bow of elected Democrats elsewhere who might try to push unions too far.

Ms. Weingarten resisted any suggestion that her union was bending with the political winds. “There’s a much more important purpose here, which is the love of children,” she said in the interview, held at Green Dot New York Charter School in the South Bronx, an unusual example of a charter with unionized teachers.

As she did often in the interview, she spoke slowly, tapping her hand on the table for emphasis, and offered perorations, as if speaking to a hall full of listeners.

But she can also be surprisingly intimate. She is a touch person, and at one point reached across to check a reporter’s forehead to see if he might be feverish after asking a particular question.

If Ms. Weingarten is cast in the black-hat role in “Waiting for Superman,” which has inspired a blizzard of favorable op-ed columns, the role of education savior is given to high-performing charter schools.

Yet one scene that the director filmed, but left on the cutting-room floor, showed Ms. Weingarten signing a contract on behalf of teachers at Green Dot, which has had impressive results since it opened in 2008.

Steve Barr, who founded the Green Dot charter school network, lamented that the film ignored examples of charters and unions working together. “It doesn’t help to take the one true open-minded union leader and bash her,” he said.