PROTESTERS MARCH THROUGH DOWNTOWN L.A. ON NATIONAL DAY OF ACTION 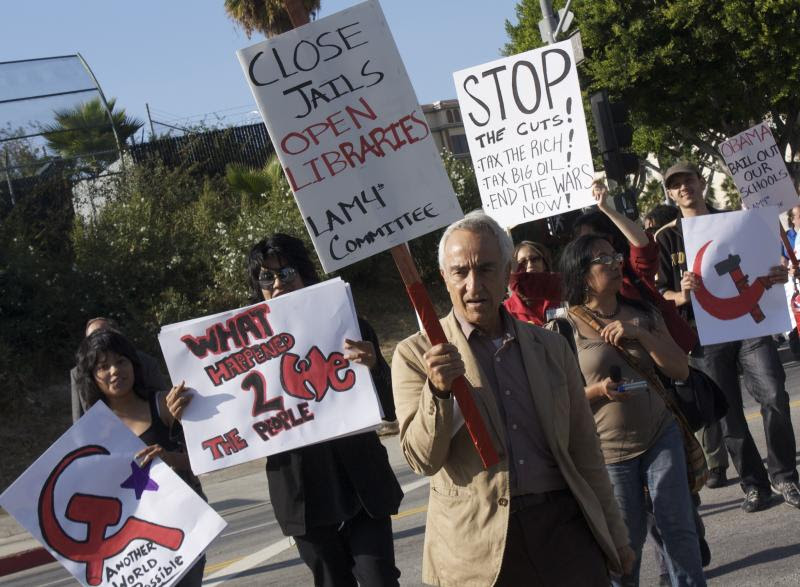 October 7, 2010 - Protesters gathered Thursday afternoon near the Los Angeles Unified School District Headquarters and marched through downtown to the Public Library as part of the National Day of Action to Defend Public Education and Social Services.

The rally was organized by the L.A. March 4th Committee to defend Public Education and Social Services, who call themselves a “grassroots coalition of teachers, students, workers and other concerned community members.” The name of the committee stems from the March 4th protests for education reform.

The crowd of about 50 was comprised of a variety of activist groups, including the Freedom Socialist Party, Radical Women, the South Central Neighborhood Council and a group of Aztec dancers called Mictlanxiuhcoatl.

Also present were several teachers and students rallying for the cause of public education.

“The priorities of this state are completely skewed,” Wallace said.

This seemed to be the prevailing sentiment of the group, as they traveled from the LAUSD headquarters through downtown. Cars honked as the Aztec dancers moved to the beat of a drum, while other protesters rallied around the cry: “We need a priority switch, stop the cuts and tax the rich.”

One of the priority switches the protesters called for was withdrawing funds from what Christine Browning, an assistant in the USC health sciences program and a self-proclaimed activist, calls “an imperialist war.” Many of the protestors also feel that too much money is being spent on incarcerating criminals.

The California State University system has been negatively impacted by budget cuts, says Carlos Coronel, a student at CSULA who attended the protest. He says that it has become harder to get classes and that, as a working student, the shortage of classes has made it very difficult for him to tailor his course load to his work schedule. He feels that the wealthy should be taxed more heavily and the extra revenue should be spent on public schools and colleges.

Public education and social services were not the only causes people marched for, however. Many of the marchers were members of various socialist groups and throughout the course of the rally they spoke up in favor of full legalization of all immigrants, ending anti-homosexual bigotry and overturning capitalism.