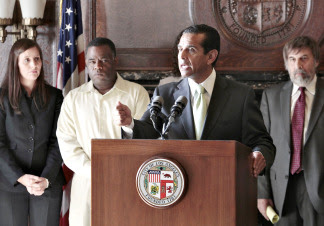 AP Photo/Damian Dovarganes - Los Angeles Mayor Antonio Villaraigosa at podium, announces the city and The Los Angeles Unified School District board will move ahead with reform efforts with or without the support from the Teachers' Union on Thursday, Oct. 7, 2010, during a news conference at the City Hall in Los Angeles. From left: teachers at Gompers school: Sarah Talley and Kenneth Aubrey. Mark Rosenbaum, Chief Council ACLU, far right.

Oct. 7, 2010 | Los Angeles Unified officials and L.A.’s mayor have vowed to move forward with a sweeping change to seniority-based teacher layoffs at the school district. The comments at a City Hall news conference today came after the teachers’ union threatened to go to court to stop the changes.

The settlement agreement between L.A. Unified and civil rights lawyers stipulates that nearly four dozen low-performing campuses with improved test scores would be shielded from layoffs. That means veteran teachers at other district schools who’d otherwise be protected could lose their jobs.

"After this settlement never again will a school have to suffer receiving layoff notices to 60 percent of their teachers while across town another school receives ten percent or less," Gates said.

There was little learning going on in classrooms where substitutes replaced laid-off teachers. School officials said the move would help correct unequal education at schools in working class neighborhoods.

A.J. Duffy, the president of the district’s 30,000-member teachers union, says the settlement won’t fix the main problem at these schools: teachers leave schools in tough neighborhoods because they get little professional-support.

"It’s not about mandating that certain teachers will be protected because those teachers will still leave before their fifth year, particularly the newer teachers, because they, the district, hasn’t changed the condition under which teachers teach in these schools," Duffy said.

State education law already allows school districts, Duffy says, to dispense with seniority-based layoffs so all students can get an equal education as guaranteed by California’s constitution.

"We call on UTLA to be that reform-minded, progressive union because it benefits their own members, their own teachers, but more importantly it can turn the tide for thousands of young people, poor kids and kids of color," she said.

The disagreement pits high profile players in L.A.’s progressive politics: the ACLU, the school board majority and the mayor, versus the teachers union that used to employ him.

Time’s running out for the union to challenge the teacher seniority rule change at L.A. Unified. An L.A. County Superior Court judge will consider signing off on the change next week.