California spent nearly half a billion on college freshmen who dropped out.

The state spent about $466 million — more than any other state — on students at public colleges who did not return for their sophomore year.

October 11, 2010 | At a time when California’s institutions of public higher education are battling to maintain state funding, a new report has found that over a five-year period, the state spent nearly half a billion dollars to educate first-year college students who dropped out before their sophomore year.

The report, "Finishing the First Lap: The Cost of First Year Student Attrition in America’s Four Year Colleges and Universities," found that California ranked first in the nation in the amount of taxpayer funds -- $467 million -- spent on students at four-year colleges who failed to return for a second year. Texas, at $441 million, and New York, at $403 million, ranked second and third, respectively, the report showed. 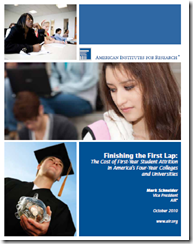 The study by the Washington-based American Institutes for Research, for release Monday, analyzed federal data on retention rates at hundreds of four-year colleges and universities and calculations of state education funding between 2003 and 2008.

●●smf notes: if this is true and California’s first-year college dropout rate (“the attrition rate”) is half the national average - isn’t  California’s investment paying off?

The federal data do not track students who complete their studies at other institutions, said study author Mark Schneider. But other federal measures indicate that most dropouts do not return.

"There are taxpayer dollars, large amounts of money going out the door to students who are not coming back the next year," Schneider said in an interview. "In the K-12 world, we are saying schools are responsible for the success of students. In higher education, we haven't done that yet and we need to."

At California public colleges, first-year dropouts accounted for about $466 million in state funding in the five years studied. Federal grants to those students totaled almost $61 million.

California Supt. of Public Instruction Jack O'Connell agreed that colleges and universities could operate more efficiently in moving students toward graduation. But he said state-imposed budget cuts that have slashed classes, increased student fees and reduced staff are more of a hindrance.

"My impression is that we need to make a greater investment in higher education" he said. "Too many students are being forced to take on a second or third job. The lack of adequate college funding has led to fewer classes being offered, which extends the number of years it takes to finish."

"The fact that we have these numbers helps with accountability and transparency," he said. "We should do exit interviews with students and learn why they leave education."

The study does not look at reasons for student attrition nor seek to blame them for their lack of success. It also is not a call for disinvestment in higher education but rather a challenge to state governments to demand institutions do a better job, Schneider said.

"We need to start thinking about students as clients and start asking what do they need and how do we satisfy their needs," Schneider said. "It’s a question of productivity and efficiency and how school get better at what they’re doing."

In California, non-returning first-year students at public colleges accounted for about $425 million in state appropriations and $41.7 million in state grants to students in the five years studied, according to the report. Federal grants for the students totaled almost $61 million.

from the report: EXECUTIVE SUMMARY

The Obama administration is calling for the United States to regain its status as the nation with the highest concentration of college-educated adults in the world.

In response to this challenge, the president, governors, foundations, individual campuses, and many others are pursuing a “college completion agenda” that aims to get more students across the finish line. However, far too many are stumbling soon after they sprint off the mark.

In this report, we focus on the high costs associated with the large number of students who do not return for a second year at the college where they first enroll.

Using data from the U.S. Department of Education’s Integrated Postsecondary Education Data System (IPEDS), we show that during the five years between 2003 and 2008 (the latest years for which we have data):

• States appropriated almost $6.2 billion to colleges and universities to help pay for the education of students who did not return for a second year.

• States gave over $1.4 billion and the Federal government over $1.5 billion in grants to students who did not return for a second year.

“In recent years, we have failed to live up to our opportunity legacy, especially in higher education. In just a decade, we’ve fallen from first to ninth in the proportion of young people with college degrees. That not only represents a huge waste of potential; in the global marketplace it represents a threat to our position as the world’s leading economy.” - President Barack Obama

The nation will have a difficult time reaching the administration’s policy goals unless we find ways to increase the number of students who return to complete their college degrees. In the meantime, we continue to spend far too much money on students who don’t even finish the first lap, let alone fail to cross the finish line.