STORYBOOK THEATER: Vote for the Arts for Los Angeles Schoolchildren :: Your vote = $ !

by smf for 4LAKids

June 14, 2010 -- Last weekend I went to the Saturday matinee of Peter Pan at the Visual and Performing Arts High School downtown, the quaintly and picturesquely named Central New High School #9. I took my two nieces: Georgia – a rising first-grader, and Grace – an entering kindergartener – and we had a marvelous, magical  time.

Our faith was renewed in fairies and that we can all fly if we think good thoughts and set our minds to it.  Tinkerbell was saved and Captain Hook (who had been chewing scenery) eaten.

At the intermission – I guess Peter Pan is is consummately British so ‘at the Interval’ – Linda turned her cell phone on and Grace called her mother to make one thing perfectly clear: “It’s not a movie, Mommy. It’s a PLAY!”

As much fun as we had: kidlets, Linda and I, and Linda’s eighty-somewhat mother – that cannot compare with the fun the VAPA HS#9 students had!

Peter and Wendy and John and Michael and Nana the Dog; Mr. & Mrs. Darling and  Lost Boys and Pirates and Indians; stagehands and scenic designers and ticket takers and riggers and gaffers – dancers and singers and musicians and actors - and sellers of cupcakes – and faculty and staff and one ecstatic principal had about as much fun as one can have – and they – we - were all learning stuff!

Today my friend John Gallogly, Executive Director of Theater West, asked me to let you know about a program Theater West runs to involve more youngsters in The Theater. And an opportunity to help. 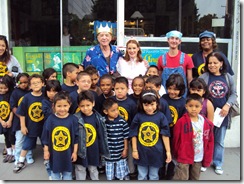 We need your help to benefit underserved children from LA County.  Theatre West is currently in the running for a $25,000 grant from Pepsi which would go directly to our children’s theatre program, Storybook Theatre.  The $25,000 will pay for 2,500 Title I students to come see our award-winning shows.  We hope you can include this in your blog and urge people to vote for Storybook Theatre today!

In the face of the recent budget cuts, our local schools and communities are losing arts funding across the board.  One of two professional children’s theaters operating under an Actor’s Equity contract, Storybook Theatre fills the void in arts education by offering stimulating, educational shows that are geared towards 3 to 9 year olds.  For many students, this is the first encounter they will have with theatre. Storybook Theatre has brought in Title I students from all over LA County.  With this grant we will be able to reach 2,500 more students in Los Angeles.

This grant is a wonderful opportunity for our theatre to reach more students around Los Angeles and for you to show support to the students of LAUSD. Please take two minutes to vote for Storybook Theatre online and pass this on to your neighborhood councils, community liaisons, and the schools in your district.  Every vote counts! 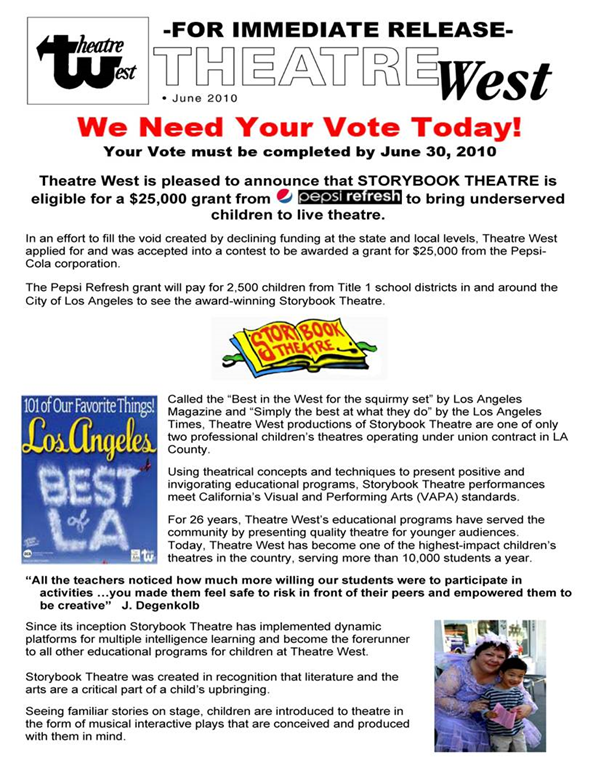 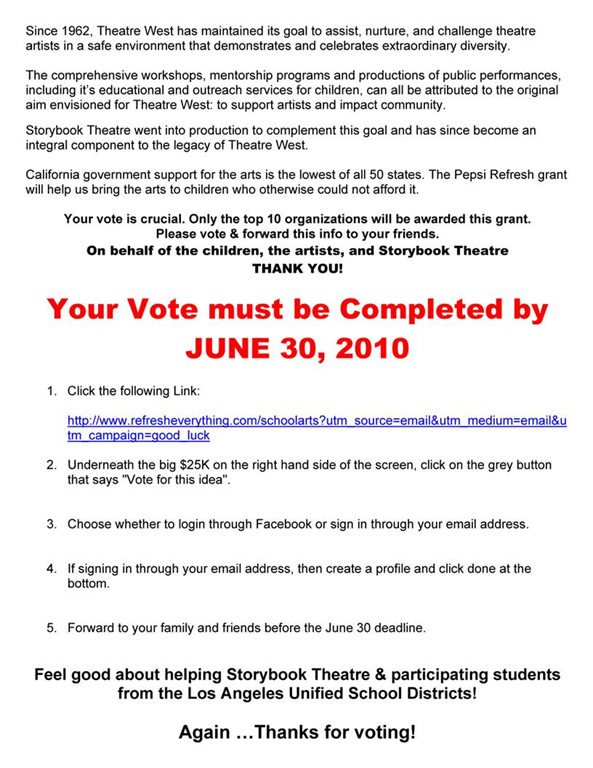 Called the “simply the best” by the LA Times, TW’s ed program are one of the highest-impact. // TW’s ed programs: •adapt classic tales into plays and musicals with lessons for kids; •present these as fully staged productions; •bring kids to these shows from across LA, including with transportation from poor areas; and •partner with schools to bring theatre into class to teach reading, English, and arts skills. // In 2009 alone: 1,800+ elementary school kids at Title I schools saw shows for free; •the Elementary School Program taught 1,500+ kids, including 350 from Title I schools, and brought 100% to shows for free; •Middle School Playwrights reached 100 students; •High School Program reached 50 kids at a Title I school; and •TW’s shows for kids reached 10,000+. // TW now seeks Pepsi's help to bring 10,000+ kids a year to see its shows, despite cuts in State funding for arts, including nearly $20,000 to TW.

Budget Notes: An additional $25,000 (already raised before the State education funding cuts) will provide the other 2,500 necessary tickets and will provide transportation, including from underserved areas.

Thank you for voting!

Vote for this idea!