LAUSD IN SEARCH OF FUNDS: "If Measure E required a simple majority to pass, we would be celebrating right now," an LAUSD statement said. 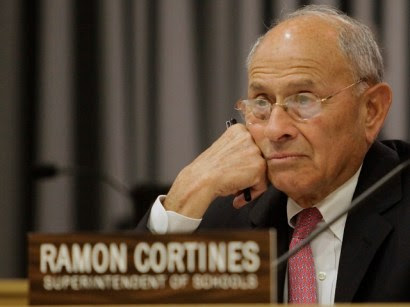 Measure E was supported by more than half of voters during Tuesday's election, but it required a two-thirds majority vote to pass.

"If Measure E required a simple majority to pass, we would be celebrating right now," LAUSD Board of Education President Monica Garcia and board member Steve Zimmer said in a joint statement. "The two-thirds requirement, however, proved too high of a threshold in such uncertain economic times.

"LAUSD students did not create our budget crisis and they cannot afford to be its victims," according to the statement. "That's why we woke up early this morning, rolled up our sleeves and began the work on new fronts to generate revenue for LAUSD."

According to Garcia and Zimmer, the district was pushing federal legislators to pass a $23 billion proposal that would save 300,000 teaching positions across the country. About $2.8 billion would come to California, with $225 million to the LAUSD, they said.

They also said they were backing Assembly Speaker John Perez, D-Los Angeles, in his push for a $3.8 billion state repayment to local school districts.

"We all know how fractious and difficult the budget process is, so we must remain attentive and agile to make sure this initiative remains intact," they said. "The support Measure E enjoyed shows our state and federal legislators that the public does support full funding for education. We cannot back down."

Measure E would have imposed a $100 levy on each piece of taxable real property within the LAUSD boundaries, regardless of value. The proposed tax would have raised about $92.5 million a year, and would have been in place for four years. It included an exemption for low-income seniors.

The LAUSD is expected to be facing about a $640 million budget deficit in the coming fiscal year.

When the Board of Education voted to place the item on the ballot, board member Richard Vladovic conceded that the tax would not be a solution to the LAUSD's financial troubles, but he said it was a step in the right direction.

Board member Tamar Galatzan voted against the proposal, saying it would raise a relatively small amount of money and would barely amount to a "Band- Aid" that would do little to cure the district's overall budget woes.

"Now is the time to look at every single program, look at how it's funded, why it's funded, who benefits from it, get rid of the ones that don't work and change the ones where the funding mechanism just isn't benefiting our students," Galatzan said. "We as a board need to do all of that work first."

The Howard Jarvis Taxpayers Association also opposed the measure, noting in a ballot argument that it would have been the sixth time the district has raised taxes in the last 13 years.

●●smf: "If Measure E required a simple majority to pass, we would be celebrating right now," an LAUSD statement said.

"If the rules had been different, we would have won the game," the losing coach said.

"Except for the winter, we would've defeated the Russians," a spokesman for Napoleon said.

"We have met the enemy and he is us." – Pogo Possum