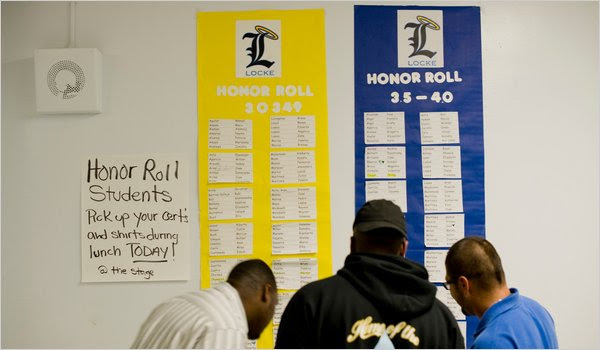 Michal Czerwonka for The New York Times -- A list of honor roll students posted in the halls Locke High School in Los Angeles in May.

June 24, 2010 -- LOS ANGELES — As recently as 2008, Locke High School here was one of the nation’s worst failing schools, and drew national attention for its hallway beatings, bathroom rapes and rooftop parties held by gangs. For every student who graduated, four others dropped out.

Now, two years after a charter school group took over, gang violence is sharply down, fewer students are dropping out, and test scores have inched upward. Newly planted olive trees in Locke’s central plaza have helped transform the school’s concrete quadrangle into a place where students congregate and do homework.

Locke High represents both the opportunities and challenges of the Obama administration’s $3.5 billion effort, financed largely by the economic stimulus bill, to overhaul thousands of the nation’s failing schools.

The school has become a mecca for reformers, partly because the Department of Education Web site hails it as an exemplary turnaround effort.

But progress is coming at considerable cost: an estimated $15 million over the planned four-year turnaround, largely financed by private foundations. That is more than twice the $6 million in federal turnaround money that the Department of Education has set as a cap for any single school. Skeptics say the Locke experience may be too costly to replicate.

“When people hear we spent $15 million, they say, ‘You’re insane,’ ” said Marco Petruzzi, chief executive of Green Dot Public Schools, the nonprofit charter school group that has remade Locke. “But when you look closely, you see it’s not crazy.”

Locke High, with 3,200 students, sprawls across six city blocks in south-central Los Angeles. The school’s principal in 2007 complained publicly that the Los Angeles Unified School District had made it a dumping ground for problem teachers.

Kevin Rauda, a senior, recalled a teacher who read newspapers in class instead of teaching. In spring 2008, only 15 percent of students passed state math tests.

Green Dot, which operates charter schools in Los Angeles and one in the Bronx, won control of Locke from the district in 2008 and began a turnaround effort.

In August 2008, Kevin King, a retired police lieutenant hired by Green Dot, toured Locke’s campus and found broken windows, smashed lights, and security cameras that did not work. Teachers’ cars were parked helter-skelter, including on some handball courts; gang members were selling drugs on others.

“Kids couldn’t even go to the bathroom without being pocket-checked or hassled,” Mr. King said.

He put together a new security force to expel the gangs. Green Dot fixed the lights and cameras, painted over graffiti, reorganized the parking, and hired bus companies to transport 500 students who previously walked dangerous streets to school.

Green Dot divided Locke into small academies. Several, modeled on the charters it operates elsewhere, opened in fall 2008 with freshman classes of 100 to 150 students and are to reach full enrollment of 500 to 600 students by fall 2011.

Other academies concentrate on remedial classes for older students, including some returning from jail. Another focuses on preparing students for careers in architecture.

Green Dot required Locke’s 120 teachers to reapply for their jobs. It rehired about 40, favoring teachers who showed enthusiasm and a belief that all Locke students could learn. The campus stays open each day until early evening for science tutoring, band and other activities.

Hundreds of school districts across the nation will soon be trying makeovers, prodded by the Obama administration’s push to remake the nation’s 1,000 worst schools, and the availability of $3.5 billion in federal money.

But if they rely on federal money alone, they will have to spend less than Green Dot.

Under rules set by Congress, districts can apply for up to $6 million for each failing school, to be spent over three years.

During a Senate hearing in April, Senator Al Franken, Democrat of Minnesota, congratulated Mr. Petruzzi on the Locke transformation, but also suggested its reliance on philanthropic donations would make it difficult to imitate.

“I’m thinking, how scalable is this?” Mr. Franken said.

In interviews, Mr. Petruzzi and other Green Dot officials offered a budget overview. Before and since Green Dot’s takeover, tax dollars have financed Locke’s annual operating budget of upward of $30 million, which during the four-year turnaround will total about $115 million, he said.

By then, expenditures will have exceeded that four-year, taxpayer-supported budget by about $15 million, with philanthropies making up most of the difference.

Over the four years, Green Dot is set to spend about $2 million on increased security and busing. It spent about $700,000 to create a classroom for a new architecture academy.

Green Dot has also spent several million dollars for additional classroom space because hundreds of students who had cut school or dropped out now show up for class, Mr. Petruzzi said.

Dividing Locke into academies resulted in extra personnel costs, Mr. Petruzzi said, because each academy has its own principal and other staff members.

Another cost: the salaries of two psychologists and two social workers who help students endure hardships like losing a sibling to gang warfare, or being evicted. They have helped prevent several suicides this year, said Zeus Cubias, an assistant principal.

Some new services for students have cost Green Dot nothing. Ms. Maya’s grades have improved since a teacher noticed she could not see the blackboard. Her parents are unemployed, and she had no money for glasses. But she had her eyes tested at a mobile eye clinic that visited Locke in October, where Vision Service Plans, a nonprofit provider, donated eyeglasses to her and 200 other students.

Experts are debating whether Locke is a good model for other turnarounds.

Justin Cohen, a turnaround expert at MassInsight, a Massachusetts nonprofit organization, said most districts could expect to spend $2 million to $3 million over three years to overhaul a failing school. Costs often include teacher training and extending the school day, he said.

“I don’t doubt they’re putting all those resources to good use,” Mr. Cohen said of Locke’s $15 million costs. “But that’s high.”

Tim Cawley, a managing director at the Academy for Urban School Leadership, a nonprofit group leading several turnaround efforts in Chicago, disagreed, arguing that even expenditures surpassing $15 million on a big school could be a smart national investment.

“We’re wasting billions every year by not fixing these schools,” Mr. Cawley said, “because the students they’re not educating end up filling our prisons.”