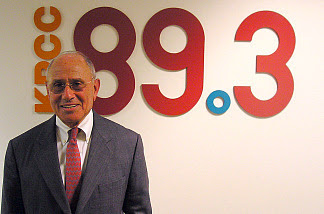 June 25 -5:53 p.m. --  Los Angeles Unified School District Superintendent Ramon Cortines is constantly faced with a slew of tough decisions and duties. Among those duties is balancing a strained budget while still maintaining an adequate workforce.

Like the entire state of California, LAUSD has faced a major budget crisis for years.

Cortines spoke to Patt Morrison today about juggling so many responsibilities at once and even hinted at his own retirement in the near future.

Right now, Cortines says, the district’s goal is to save jobs.

“We're doing everything possible to save jobs, not just cut. UTLA alone gave $150 million to buy back jobs,” said Cortines, who was himself on a furlough day during the interview. “All but two of the bargaining units now have joined in.”

The superintendent also gave the outlook for the 2011-2012 budget, which he said would start off with a $263 million deficit.

When Morrison asked Cortines about jobs that would be cut, he confirmed that nearly 1,000 jobs would be cut in the coming years.

Cortines said some cuts would come from the administration, where he’s already made many cuts.

“And people say, ‘that’s great you can just cut the central office.’ They provide the services for classrooms, for schools. They make sure the payroll gets done. All of the kinds of things that we just take for granted,” Cortines said. “Just a teacher in a classroom cannot do it. We need a lot of support people.”

LAUSD has recently hired a deputy superintendent, which has left many wondering if that should be taken as a signal for the end of Cortines’ time as superintendent.

Morrison asked, “Do you have a date circled in red on your calendar?”

Cortines joked, “In my head I do. It’s today!” But he acknowledged that he would at least stay on board to complete the budget for the next year, which is due in August.