A ballot measure that would add $100 per parcel to property owners' tax bills to save Los Angeles Unified jobs was drawing far less support than it needs for passage, according to early returns Tuesday night.

Ballot Measure E has to receive approval from two-thirds of all voters to be succesful. Based on early returns, the measure had a little over half the vote.

Measure E would generate $92 million a year over the next four years to save hundreds of arts and music teachers, school librarians, campus police officers and custodians.

The ballot measure comes amid the district's worst financial crisis in decades. Since 2008 the district has slashed more than $1.5 billion from its budgets and cut more than 2,000 teachers, counselors and administrators, and nearly 4,000 non-teaching school staff including bus drivers, custodians and office workers.

Despite reducing the school year this year and next year, the district could be forced to lay off another 1,000 teachers and counselors and some 3,700 other employees to close a $640 million gap for the 2010-11 school year.

Supporters of Measure E hosted rallies to convince voters to pass the parcel tax to save some of these jobs. Despite getting a late start, all of the district's employee unions also backed the tax.

This is the first ballot measure where the district has asked taxpayers to pay teachers' and other staff salaries. Since 1997, LAUSD has passed five construction

Critics of Measure E have slammed the district for asking voters to solve their financial troubles, but supporters say it is essential to offer at least a minimal education for the district's 680,000 students.

A.J. Duffy, president of United Teachers Los Angeles, said his organization has spent about $100,000 to campaign for the measure.

"We did some phone banking, worked with the County Federation of Labor and other unions to try and get the word out and kept sending a constant barrage of information out to members," Duffy said.

The slow economy also prevented the district from raising campaign dollars for Measure E, as many voters cringed at the idea of paying more taxes in these tough economic times.

While school district officials are not allowed to advocate in favor of a ballot measure on school grounds, LAUSD board member Steve Zimmer said he'd been talking to constituents at local community meetings, and during door-to-door campaigning this week.

"It's been a very mixed bag with everyone showing support for kids, programs and teachers but with many having a difficult time saying yes to a tax during this economy," Zimmer said.

Still, Zimmer stressed that it was young students who stood to lose if Measure E failed.

"There are a lot people to blame for our current economic crisis," he said. "But we can all agree that one group that is not to blame is our students."

However critics of Measure E said the district's push for a parcel tax had more to do with adult agendas than anything else.

"While it is true that our schools are horribly underfunded, the parents of Los Angeles also recognize that the LAUSD is failing because it is not designed to succeed," said Ben Austin, a local parent organizer and a member of the California State Board of Education.

"We ultimately do need to raise taxes, but not until we can transform our schools rooted in what's good for parents and kids -- not special interests and bureaucrats." 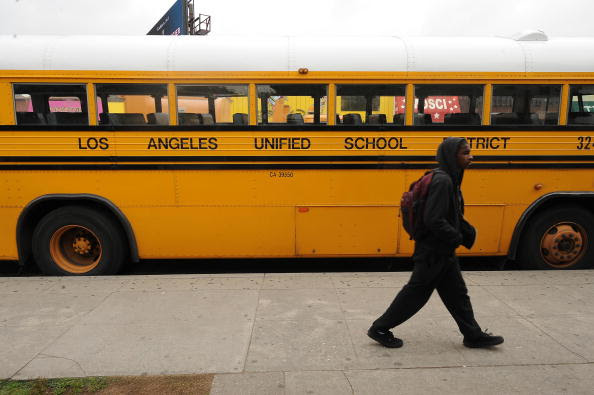 The measure would impose a $100 levy on all taxable properties within LAUSD boundaries.

Similar parcel taxes have been successfully passed in a few places, but they didn’t pass in larger districts like Pasadena and Long Beach. Unlike some other measures, the taxes require two-thirds to pass. Early returns, which tend to swing more conservative, have it only at around 51 percent.

Guzman-Lopez LAUSD officials may not have done enough to promote the measure, which was seen as a tough sell, the L.A. Times reports.

Already cash-strapped school districts may now have to find others ways to stop the bleeding.